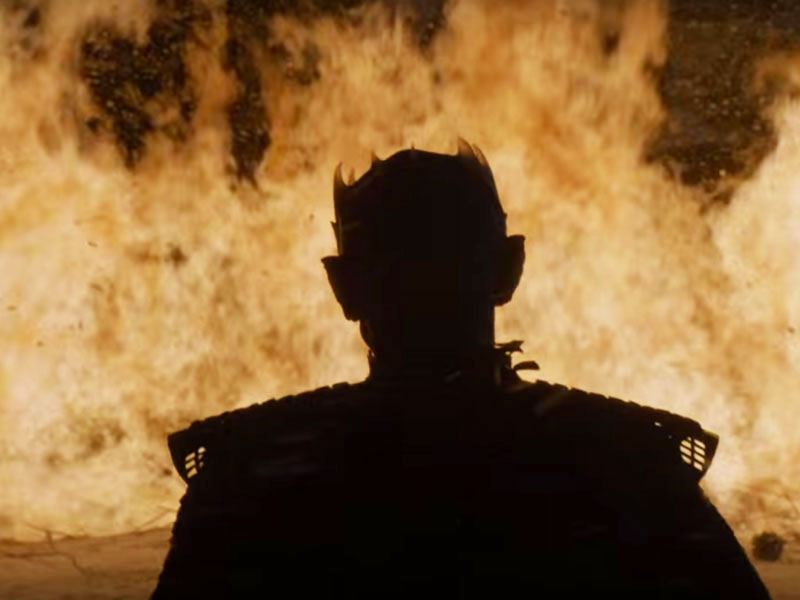 HBO has teased already desperate Game of Thrones fans with an ominous foreshadowing of what could become the true villain (or hero?) of the upcoming season.

In the second trailer for season six, released over the Easter weekend, we glimpse a flying dragon, then a spooky silhouette of zombie sorcerer The Night’s King surrounded by fire.

Fans last saw the King, leader of the white walkers, gathering an army of the dead at the end of season five. This fiery cameo could be hugely significant because of the name of the series of novels on which the TV show is based: A Song of Fire and Ice.

Many fans have speculated that the fire is personified by the dragons once controlled by Daenerys Targaryen (Emilia Clarke), who also makes a brief appearance in the teaser. As chief white walker, The Night’s King is the obvious candidate for the powers of ice. Perhaps this is a hint of a fiery showdown?

In the trailer, Daenerys is held captive by the Dothraki, the horse-riding warriors she once governed.

As she is shoved forward by her captors, the dwarf prince Tyrion Lannister (Peter Dinklage) can be heard issuing an ominous warning from another part of the world: “Are you afraid? You should be. You’re in the great game now. And the great game is terrifying.”

“We are sinful creatures. We deserve death … we all do,” The High Sparrow says.

Of course, the death (or non-death) on everyone’s minds is that of Jon Snow. Is he dead? Undead? Revivable? In a serious but stable condition? Sadly, the trailer gives no clues.

Of course, it’s not just death that the TV show is renowned for, but steaminess as well. You’ll need to look elsewhere for a healthy dose of that.

While GoT fans are screaming out for season six to finally be released, Jaime Lannister (or at least his real-life clone Nikolaj Coster-Waldau) couldn’t care less: he’s too busy kissing one of the best-known stars of the hit show Mad Men.

In a new Apple TV ad, Coster-Waldau gets cosy with actress Alison Brie, best known as Mad Men‘s Trudy Campbell. The star duo sit in a trailer on an unnamed Hollywood movie set, rehearsing for a kissing scene.

Coster-Waldau suggests some music to lighten the mood, settling on a song by R&B singer Jeremih. Unfortunately, there’s not a lot of ‘spark’ between the pair, so Brie turns to the TV for inspiration, where Coster-Waldau is having a passionate smooch with Juliette Binoche in the 2013 film A Thousand Times Good Night.

Brie doesn’t hesitate in asking Apple TV’s Siri to rewind a little bit so she can get some pointers.

For more, you’ll have to wait until GoT returns to Foxtel in late April.

-with Jackson Stiles and James Ried ‘We deserve death … we all do’: new Game of Thrones trailer