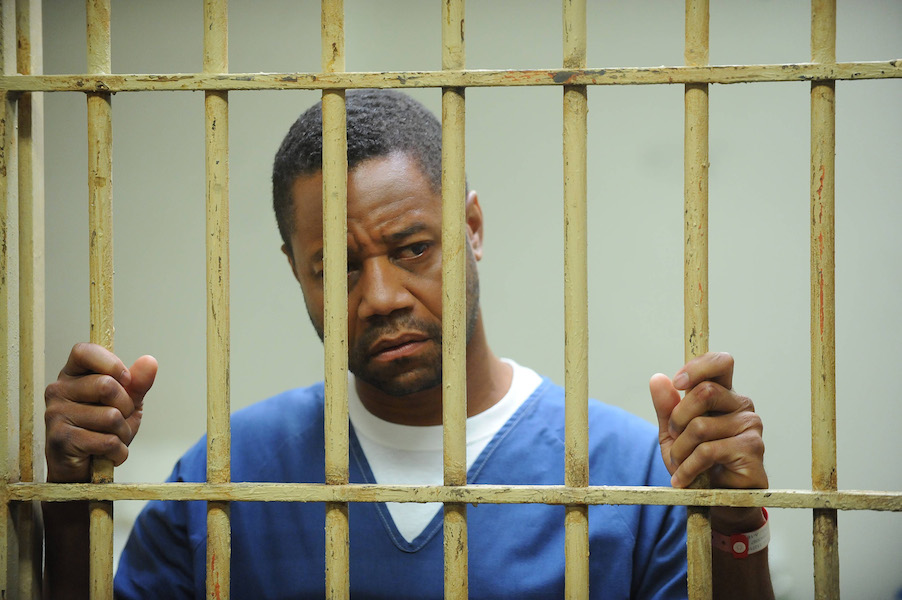 The horrific slaughter of Nicole Brown Simpson and Ronald Goldman on the evening of June 12, 1994, sparked one of the most controversial murder trials in US history, with the finger of blame pointed squarely at former NFL player and movie star O.J. “Juice” Simpson.

• Making a Murderer: the case for and against Avery
• Did The Simpsons predict a Trump presidency?
• Here’s what’s new on Netflix, Stan and Presto

Americans were stunned by the revelations to come, including a violent history of domestic abuse, with repeated assaults against his ex-wife.

And, of course, there’s that car chase, as Simpson went on the run in his white Bronco, holding a gun to his own head as fellow retired footy play Al Cowlings drove, the LAPD followed at a bizarrely slow pace and the world looked on, ordering pizza in apparently record numbers as if it were all light entertainment.

Even the NBA final was reduced to sharing split screen coverage with the unfolding events.

More than 20 years later, the shocking twists and turns of the criminal trial that followed, leading to a stunning “not guilty” verdict, continue to fascinate, as does the upset of the subsequent civil trial. Prime material, then, for the debut of American Horror Story guru Ryan Murphy’s latest anthology series, American Crime Story.

Screening on Sunday nights on Network Ten, The People v. O.J. Simpson: American Crime Story even one episode in is must-see TV.

Penned by The People vs. Larry Flynt’s Scott Alexander and Larry Karaszewski, adapted from co-writer Jeffrey Toobin’s best-selling book The Run of His Life, it stars Cuba Gooding Jr. as Simpson.

He’s joined by an all-star cast that includes the sterling Sarah Paulson as Marcia Clark, the prosecutor who thought she had a guilty verdict in the bag before things spectacularly imploded, and Courtney B. Vance as the witty and razor sharp leader of the defence, Johnnie Cochran.

He’s backed up by a slightly hammy John Travolta’s Robert Shapiro and Friends alumni David Schwimmer as Robert Kardashian. Long before that name was the talk of gossip rags worldwide, Kardashian was Simpson’s best friend and a non-practising lawyer who was dragged into the vortex somewhat unwittingly.

Perhaps surprisingly, given its stablemate anthology, the bloody crime scene is barely glimpsed. Instead it’s the consequences of the murder and the enormous social and political earthquake it sets off that keep you glued to the screen.

There are huge egos on both sides of the case, with justice sometimes seeming like the least high priority. Just how cosy were the police with Simpson? He’s cuffed (and then uncuffed) in the backyard of his own home, away from prying eyes but busted by a cameraman regardless, sparking an enormous media storm that has never quite been surpassed, playing out salaciously in magazines and on talk-show TV.

During the chase, which kicks off at the end of the episode and opens the second, Sterling K. Brown’s soon-to-be co-prosecutor Christopher Darden criticises Simpson for retreating to his private enclave to play golf, rather than using his success to campaign vocally for racial equality. A neighbour fires back, “He’s got the cops chasing him. He’s black now”.

Darden’s attempt to head off racial politics backfires spectacularly when he goes head-to-head with Cochrane during episode five, with The People v. O.J. Simpson only becoming more interesting, not less, as it settles into courtroom drama, a testament to both the writing and direction.

Race isn’t the only card dealt with smartly here. If real victim Teresa Halbach was slightly obscured in Netflix hit Making A Murderer, Nicole is not here. During her funeral at the end of episode one, in a piece of uncanny casting, Selma Blair appears as Kardashian matriarch Kris Jenner alongside Connie Britten’s Faye Resnick, referencing the fact that Simpson beat his ex-wife repeatedly and wishing they had done more to intervene.

The program has a lot to say about media obsession with celebrity at the expense of the murdered.

As the series progresses, it also tackles the rampant sexism fired at Clark, with her looks ridiculed and her divorce proceedings dragged out into public view, as if either had any bearing on her professional ability. Paulson excels as Clark’s armour is dented and persistent leaks seek to undermine her case.

The only real misstep is the over-playing of the Kardashian kids, yet to gain notoriety for sex tapes and reality TV, for the sake of retrospective humour – the weakest aspect in an otherwise brilliant series. A scene of them cheering their surname repeatedly as their father appears on TV reading Simpson’s intended suicide note is excruciatingly bad.

A silly overreach exacerbated by Robert’s later parental lecture, “being a good person and a loyal friend is more important than being famous,” the cheering scene has since been called out as bogus by Khloé Kardashian on James Corden’s The Late Late Show.

For the most part, the facts are delivered with a level head, allowing the monstrosity of the circus playing out both in court and all around to entertain and appal in equal measure.

The People vs OJ Simpson continues on Channel Ten at 8.30pm on Sunday. You can also stream full episodes after they’re released on TenPlay here.