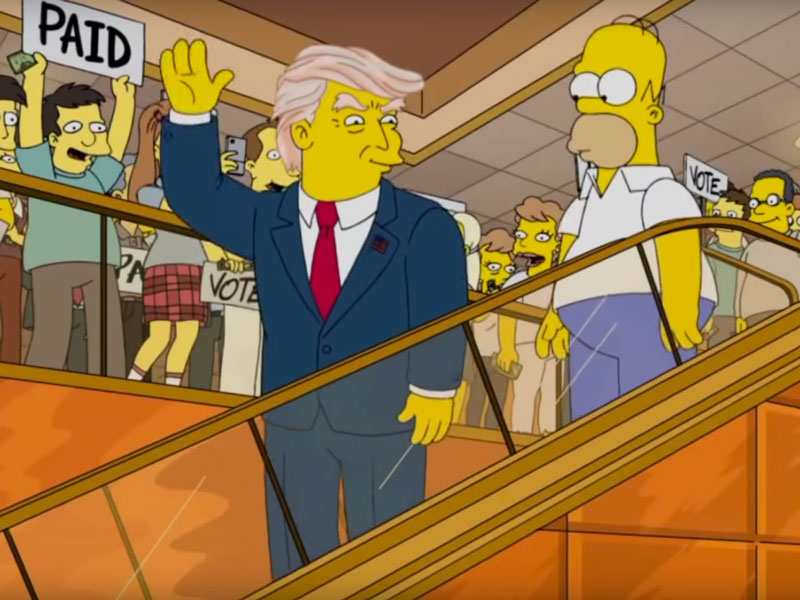 The Simpsons predicted Donald Trump’s political ascent 16 years ago, with a storyline suspiciously similar to an increasingly likely reality.

The iconic cartoon has a pretty good track record of ‘life spoilers’, the strangest involving a three-eyed fish caught in a reservoir in Argentina in 2011.

Thus, we should perhaps be slightly concerned the hit animated show predicted a Trump presidency 16 years ago.

• Beloved Simpsons character to come out of the closet
• If The Simpsons were an average Aussie family
• Not excellent! Voice of Mr Burns quits The Simpsons

In the season 11 episode ‘Bart to the Future’ in 2000, Bart has a vision of the future where Lisa has become the “first straight female president”, taking over the United States’ highest level of office from predecessor President Trump who left her with “quite a budget crunch”.

Apparently, President Trump had invested in children, funding a breakfast program that “created a generation of ultra-strong super criminals” and a midnight basketball competition that “taught them to function without sleep”.

We can only hope it isn’t a sign of things to come.

See the clip below

The cartoon, created by Matt Groening, has entertained audiences with a satirical view of a family’s working class lifestyle since 1989.

Although we can only hope Trump’s victory is not a prophecy, there were other instances the writers had apparently looked into a crystal ball.

Bart’s three-eyed fish Blinky, was caught in an old creek that backs onto Mr Burns’ nuclear plant in the 1990 episode ‘Two Cars in Every Garage and Three Eyes on Every Fish’.

The freak fish literally has three eyes neatly lined up on its head, similar to a wolf fish caught in an Argentine reservoir in 2011.

Eerily, the reservoir was also where hot water from a nearby nuclear plant was pumped.

Football’s world governing body FIFA was embroiled in a corruption scandal in 2015, that had since claimed the careers of two of the sport’s most powerful figures, FIFA President Sepp Blatter and Union of European Football Associations (UEFA) President Michel Platini.

In the 2014 episode ‘You Don’t Have to Live Like a Referee’, a FIFA official is arrested for corruption. Less than a year after the episode aired, 14 people with connections to the world football organisation were indicted by the FBI for corruption.

The Simpsons were eating radioactive tomatoes long before a tsunami off the coast of Japan wiped out a nuclear power station at Fukushima.

In a 1999 episode, Homer creates a hybrid tomato-tobacco plant by sowing it with radioactive nuclear waste. The product? An rosy red ‘tomacco’ with an addictive centre.

Some believe The Simpsons‘ real-life predictions also pointed to 9/11.

Lisa holds up a magazine cover advertising $9 tickets to New York near an image of the twin towers in the September 1997 episode ‘The City of New York vs Homer Simpson’.

Rather than a real-life prediction, it is probably more of an ominous coincidence.

About 12 years before the first iPhone was released, bullies at Springfield Elementary School were taking memos on a Apple Newton tablet – an ancient touchscreen that failed to meet all expectations.

But converting handwriting to digital text was no easy feat.

In the 1995 episode ‘Lisa on Ice’, a memo to “beat up Martin” – a teacher’s pet and favourite target of school bullies – comes out as “eat up Martha”.

A former high-level Apple engineer later told Fast Company the episode was hanging over their heads as they created the iPhone’s touchpad.

Lastly – who could forget the hamburger earmuffs? Did The Simpsons predict a Trump presidency?