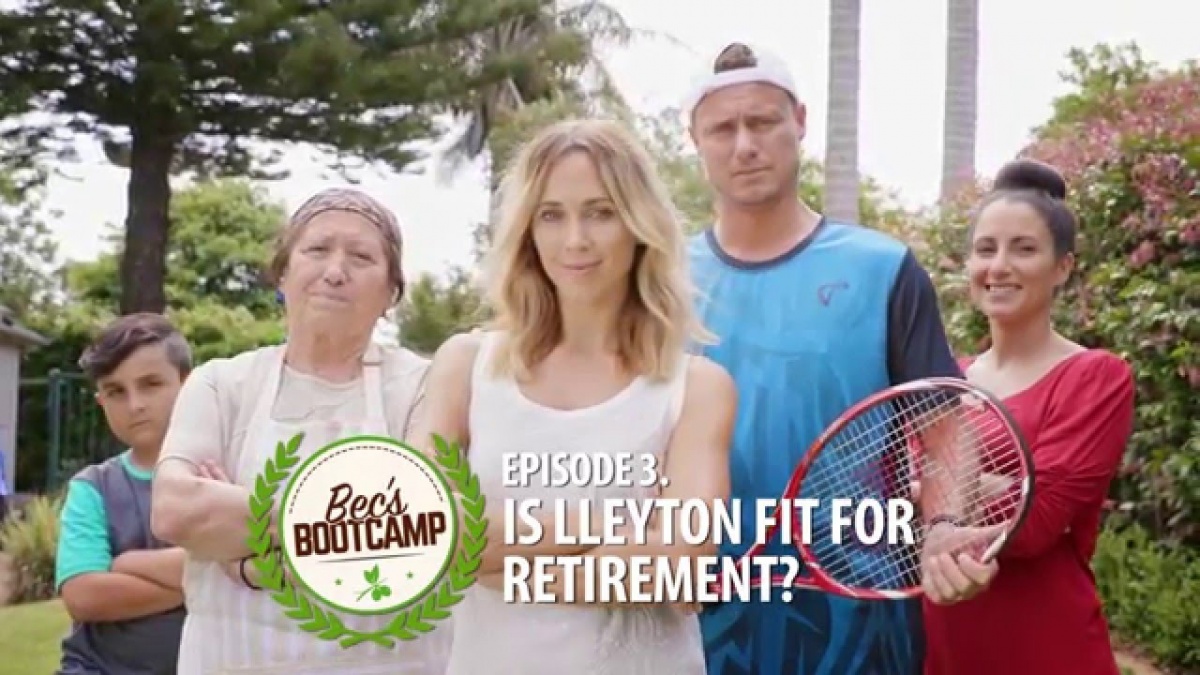 Just one month after Lleyton Hewitt laid down the racquet for the last time, it seems wife Bec Hewitt is ready to step back into the spotlight.

A decade after she left the sandy shores of Home and Away, Bec has strapped on her acting shoes for a mini-series called ‘Bec’s Boot Camp’.

While some news outlets have billed the series as an “eyebrow-raising reality show”, it’s really just an ad for deli meats.

The series is part of an advertising campaign for smallgoods company Hans, purveyors of sausage, salami and cheese, and features a recently-retired Lleyton being whipped into shape by Bec.

The mini films portray Bec as the housewife with an answer to everything – whether it be how to make the kids eat their school lunches, how olive oil can be used as a secret beauty fix or how to keep the family active.

“To be honest I’m not sure how Lleyton will take to retired life, so I’ve got Yia Yia to teach him how to make homemade olive oil,” smiles Bec to the camera as Lleyton is forced to grind olives in the back garden under the watchful eye of a bossy Greek grandmother.

While the series won’t be nominated for any Oscars, some are speculating it could mark Bec Hewitt’s return to the small screen.

When a 21-year old Bec Cartwright began dating Lleyton Hewitt in 2005, she was a bubbly Home and Away star and a household name in Australia.

Her long-term relationship (and short-lived engagement) with fellow soap star Beau Brady only helped make golden girl Cartwright a regular on the covers of magazines and the walls of teenage boys.

There was a brief foray into the world of pop music in 2003. Her single All Seats Taken made it to No.10 on the ARIA charts but failed to set the world on fire.

After seven years of Home and Away, Cartwright was poised to attempt the fabled post-soapie transition exemplified by Kylie Minogue and Chris Hemsworth, but it all came to a halt when Lleyton proposed to Bec six weeks into their relationship.

A wedding and three kids later, Cartwright, now Hewitt, is yet to step back into the acting game or show any signs of wanting to – until now.

A comeback … via snacks

It’s ironic Bec has channeled her inner housewife for the series, as viewers will no doubt question whether the ads are a chance for Hewitt to dip her toes back into the acting pool.

While Lleyton features intermittently in the videos, he is given few lines and the majority of screen time is taken up by a trim and toned-looking Bec.

The former tennis star gives some admirable slapstick as he struggles to belt a dirty rug with a tennis racquet.

“My mum said you used to be a tennis player. What happened?” asks the cheeky young neighbour who Bec has asked to keep Lleyton in shape.

It’s clear the snack company has keenly used the family-friendly Hewitt brand, built over years by images of Bec watching Lleyton eagerly from the stands with their three beautiful blonde children.

After literally spending years on the sidelines, it’s possible Bec is ready to let Lleyton sit out the next set.