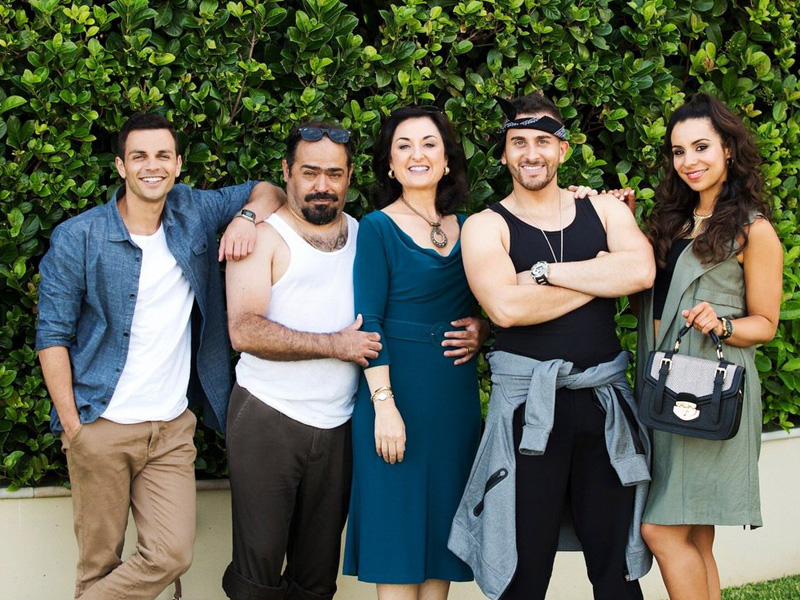 This show was one of 2016's surprise hits. Photo: Nine Network

The makers of a comedy that’s being branded “racist” and “the worst thing ever” have defended their show against the “keyboard warriors” who say it’s offensive.

Here Come The Habibs – which premiered on Tuesday at 8:30pm on the Nine Network – tells the story of an Australian-Lebanese family who win the lottery and move from working-class western Sydney to a harbour-side mansion in an affluent suburb.

And given the Habibs’ very conservative and wealthy neighbours at their new house, the premise of much of the program’s humour trades on a misunderstanding between the “wogs” and the “Aussies” next door.

• The foremost figures in Aussie entertainment
• Q&A: the candidates who could replace Tony Jones
• Why Mad as Hell is winning Aussie politics

Although this relationship is plagued by only very mild tension in the show, for some people just watching the adverts was enough to induce outrage and disgust.

A change.org petition signed by more than 2600 people before the show aired wrote: “Channel 9, pull this show. Do not contribute to racism in Australia. Do not alienate non-white Australians by using cheap racist jokes.”

@AlteredCourse on Twitter wrote: “Based on the plug it was just given during the cricket, Here Come the Habibs might be the worst thing ever.”

But the show’s creators told The New Daily that the people signed the petition to have the show axed had unfairly “judged a book by its cover”.

“It is hard to make judgement calls on something you’ve never seen,” co-creator Matt Ryan-Garnsey said.

“It is a family comedy that you can watch with your kids and your parents.”

Another of its creators, Lebanese-Australian comedian and actor Rob Shehadie (Pizza, Housos, Swift & Shift Couriers) described the anger as “bizarre”.

“I’m not really getting uptight about what those keyboard warriors are saying,” Shehadie told The New Daily.

“They’re judging a book by its cover, they’re going off a promo where half of it wasn’t even in the show.

“If this show was on SBS or ABC I don’t think we would have an issue. People in Australia are used to ethnic shows on those networks, but not commercial television.

“People don’t understand – when they whinge they give us more attention and push our cause more.”

Another creator is Turkish-Australian Tahir Bilgiç, who worked with Shehadie on SBS’s Pizza, Housos and Swift & Shift Couriers.

Ryan-Garnsey is from Irish heritage, however he says he had married into a “wog family” and loved “how things get misconstrued from one side to the other”.

‘We’re not the flavour of the month at the moment’

Shehadie said he did not believe that because the show explored the differences between families from different backgrounds, it would also be divisive and offensive to Australian audiences.

“The Habibs are representing a lot of people out there, not just the Lebanese community,” Shehadie said. “Australia is so multicultural and the ethnic market is not being fed.

“We’re just cheeky in showing how some people in Australia don’t know the real people in the western suburbs and how we live out there.

“No way am I going to do a show that denigrates the Lebanese race.”

He said that he received a call from Italo-Australian actor Salvatore Coco, thanking him for creating a program on commercial television that cast such multicultural characters as the lead family.

Coco, 40 (Heartbreak High, Underbelly), said he and many other actors of non-Anglo heritage had found it very difficult to find work on commercial television.

But seeing adverts for Here Come The Habibs gave him hope, Shehadie said.

Shehadie explained that the show created 150 jobs during production, and that in a time where not a lot of Australian television jobs were available, this was important.

“Australian television has realised it has to do this – look at Sydney alone, the western suburbs is so huge and rich and strong,” he said.

“Channel 9 are smart in doing this, because of the internet you can go elsewhere to watch diverse shows.

“But why would they spend big money on international shows when there is good local media to invest in?”

Watch a trailer of the show below: