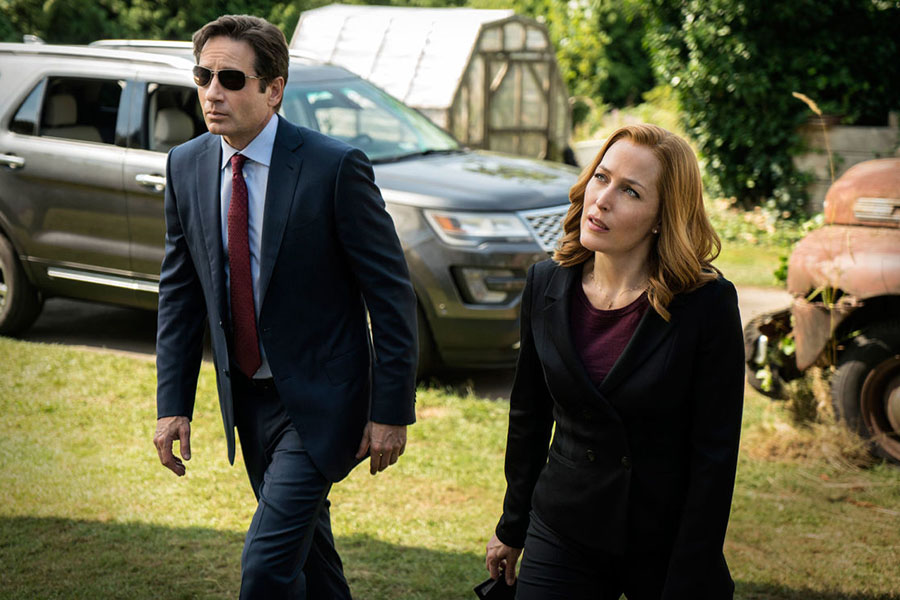 It’s got aliens up to its all-black eyeballs. It’s got chemistry out the urst. It’s got mysterious bags full of mystery. And it’s got a theme song that will have you whistling along from three rooms away.

The X-Files have been re-opened. Former Agents Scully and Mulder are reunited and back on the screen, and you will know in the first thirty seconds whether X marks the spot for you.

• The X-Files reboot ‘still seems incredibly dated’
• Stan vs Netflix: how the Aussies are gaining ground
• Shows to binge-watch on Netflix, Stan and Presto

The first episode opens with special agent Fox Mulder talking us through a quick recap of who he was before he was California’s most famous sex addict (Californication) and who Gillian Anderson was before she was hunting a serial killer in Belfast (The Fall).

Basically, if you get even a little bit excited at this 90s flashback, you’re in for a good ride.

Why you shouldn’t watch it

However, if you’re a major fan and secretly think of yourself as a long lost member of the Lone Gunmen, The X-Files on Sunday night won’t be for you.

For one simple reason: You’ve already watched it. You’re just reading this to see if you agree.

You see, the Venn Diagram of people who were seriously into The X-Files and those who could be described as digitally savvy looks a little like this: Yet Ten in their infinite wisdom have held the new X-Files episodes back a week, inviting everyone with internet access to go scavenging.

North America are already two episodes in after a double hit last Sunday and Monday. In fact, by the time Ten hopes you will be standing around the office typewriter on Monday morning discussing your Sunday TV watching, the US will be sitting down to watch a third episode.

Just to add insult to injury that episode has the awesome title “Mulder and Scully meet the were-monster”.

Ten have without doubt sacrificed their core X-Files audience to the internet. So they’re relying on luring back those who got lost somewhere between Mulder leaving the series and the dubious follow-up of feature films.

The second problem for fans of the original is that while we love a bit of retro, we have changed as a screen-watching culture.

As the text appears on screen to explain the location of the first scene, it’s easy to recall how even that simple device was fresh when The X-Files began. Now, like many of its then innovations, it is commonplace.

Audiences need strong characters for character drama, particularly the females. Oddly in this regard, Scully is in danger. She is one of the original strong females. The series was awesome for its gender-reverse: a scientific, clever female who revealed the trickery, opposite a male agent who yearned to believe every victim’s tale.

To this end a short series might be a blessing in disguise. Without venturing into spoilers, Scully is now part of the mystery, and it removes her ability to challenge Mulder’s theories objectively. Instead she is given a far less thrilling “I’m just worried about you Mulder” vibe that lacks the same spine.

For the most part though The X-Files are back. Properly back. It is simultaneously a blast from the past, owning the 1993 first season’s voice and style, as well as being a genuine progression.

Mulder and Scully have aged and done other things. Well, Scully has. Mulder appears to have become a web-surfing hermit, but that makes sense really. As Scully notes, the internet was probably not a good thing for Mulder.

The main frustration with The X-Files is the same as it ever was. It can be thought of as the Lost phenomenon. The sense that the audience are served up some mystery just for the sake of being mysterious, not for the sake of good storytelling.

On the first episode, Joel McHale of Community fame arrives in a bullet-proof limo and essentially just pours petrol – or rocket fuel – over everything. It’s all half-asked questions and vague theories, no internal narrative.

Thankfully the second episode – as far as this writer has watched – is more satisfying. It’s a classic monster-of-the-week with just a few elements of the over-arching mystery.

Commit to all six

For all The X-Files memories he gave us, no matter how many or few episodes you watched first time round, you owe Chris Carter six hours of your life. He in turn owes you an explanation and a big finish.

It’s a deal. And we have certainly got the better end of it.

Watch the trailer for the 2016 X-Files reboot: The X-Files is back – but is it any good?