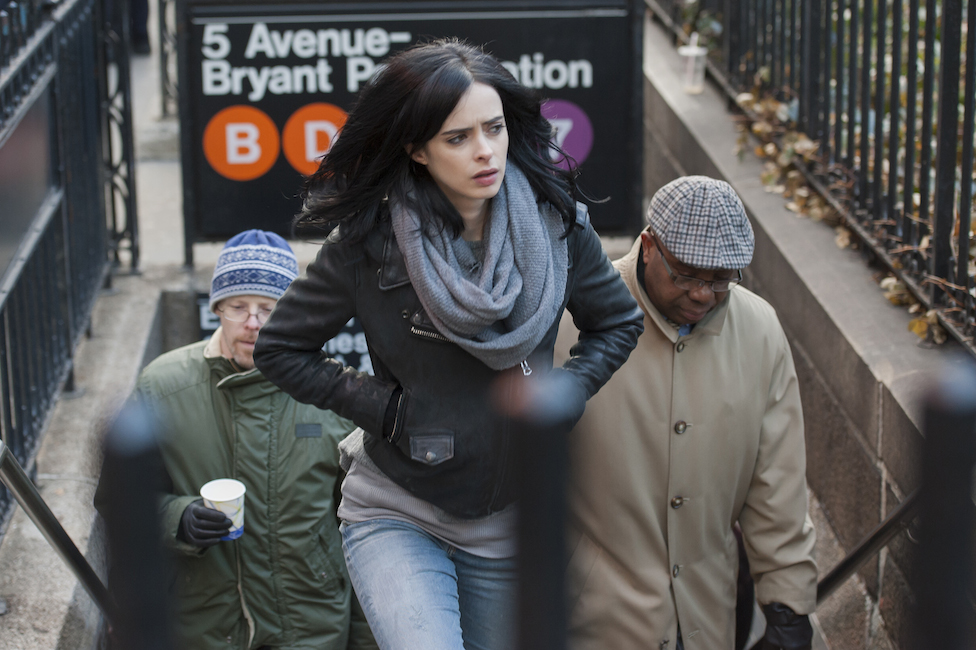 Much has been made of the sausage-fest that is the big blockbusting superhero franchises.

Scarlett Johansson’s Natasha Romanoff (aka Black Widow) is yet to get her own spin-off movie despite being one of the most popular elements of Marvel’s Avengers and Captain America series.

While Hollywood takes an age to wake up to the appeal of strong women heading up action adventure movies, despite the rather obvious domination of Jennifer Lawrence’s Hunger Games franchise, Marvel has been quietly making amends on the TV front with the debut of stellar Netflix series Jessica Jones.

• Why this is the best show on Netflix right now
• Twelve TV shows you probably missed this year
• Tired of Netflix? Here’s some great free TV

You can forget whatever you think you know about comics, because Jessica Jones is Marvel’s darkest, most confronting, seriously sexy and grown-up entry to date.

Starring Breaking Bad’s Krysten Ritter in the title role, Jones is technically an ex-hero, having given up the gig after a shocking tragedy that saw her super strength, speed and flying ability abused by telepathic rapist Kilgrave, played with a disturbing complexity by former Doctor Who David Tennant who creepily employs that time-travelling hero’s same chirpy London-ish accent.

Based on the comic book series Alias (no relation to the Jennifer Garner spy series and its amazing array of wigs) penned by Marvel supremo Brian Michael Bendis and drawn by co-creator Michael Gaydos, the show’s headed up by former Dexter scribe Michelle Rosenberg, who brings with her that darkly comic vibe.

Ritter is a compelling actress and given plenty to work with here in the conflicted Jones. Holding even her best friend, talk show host Trish Walker (Aussie Rachael Taylor) at arm’s length, a wise change from the comic series’ use of super-powered Danvers, Jones lives in her office in a rundown Hell’s Kitchen apartment, populated with possibly incestuous siblings and a drug addict played by another Aussie, the far too handsome Eka Darville.

No angel, Jones is reluctant to use her powers, but nonetheless quick to anger and get brawling, with Ritter excelling in the physicality of the role. Prepared to cross the line to get whatever needs done, done, Jones is happy to do dodgy deals with corrupt lawyer Jeri Hogarth, an excellent post-Matrix Carrie-Anne Moss, including muscling up to Hogarth’s ex-wife in order to get her to sign divorce papers. She even dabbles in a spot of torture. People get hurt in her wake. A lot.

While Netflix’s debut Marvel outing Daredevil brought a darker editorial tone and cinematography than the movies, it was also shackled with a tonally whack, corny rom com subplot. The difference between Jessica Jones and the first Marvel TV series, the cartoony Agents of S.H.I.E.L.D, by ABC studios, not Netflix, is vast.

Jessica Jones has much stronger performances all round and radiates a palpable sex appeal, particularly in the smoking hot pairing between Ritter’s Jones and fellow hero-in-hiding Luke Cage, played by The Good Wife’s Mike Colter. He’s next up for his own Netflix-led Marvel series, soon to be followed by Iron Fist then a team-up of all the Netflix Marvel heroes, The Defenders. Marvel knows it’s on to a good thing here.

Just as the best Marvel movie Captain America: The Winter Soldier excelled by channelling spy thrillers, Jessica Jones works as a combination of hard-boiled detective movies like L.A. Confidential or The Big Sleep and the disturbing sex appeal of the Gillian Anderson and Jamie Dornan-led serial killer series The Fall. Tennant’s Kilgrave channels the twisted mind games of Dornan’s Paul Spector via Anthony Hopkins’ Hannibal Lecter in The Silence of the Lambs.

Jessica Jones is brutal and occasionally hard to watch. The opening episode hits hard with a terrifying abduction, rape and double murder storyline as the villainous Kilgrave makes his return (off-stage for now), leaving audiences in no doubt that this ain’t the Avengers.

Things get much darker from there. A thrill ride, it’ll leave some breathless, but for those interested in the street-level flipside and consequences of a world full of heroes and the collateral damage of their battles with monsters, led by a stunning central turn from Ritter, ably backed up by an excellent ensemble, Jessica Jones is the best Marvel has to offer.