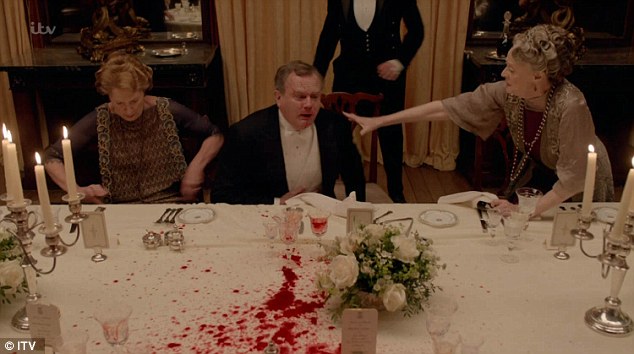 Downton Abbey fans are in shock after witnessing a bloody scene akin to Alien or Saw this week.

British broadcaster ITV went as far as to warn fans of the “shocking scenes”, but it seems no one was prepared for The Red Dinner.

Poor Cora, Countess of Grantham, is on the receiving end of some of the spill, but remains stoic as the family scrambles to call an ambulance and quell the deluge.

Not normally known for its violent scenes, Downton Abbey’s huge popularity is credited to its dramatic portrayal of an aristocratic family and their servants living in Yorkshire, England.

British actor Michael Fox, who plays footman Andy, told TV show This Morning that only the main actors in the scene were aware of what was about to happen.

“It was pretty graphic… Hugh was so good at it, because we only had one take because they can’t re-set the tables and stuff,” he said.

“And Elizabeth [McGovern] got covered because the distance it travelled was slightly further than Elizabeth was expecting.

Unsurprisingly, fans of the show, now in its final season, took to social media to vent their various emotions.

As an ex-midwife I’ve seen a fair few things but I was NOT ready for that episode of Downton Abbey!

@DowntonAbbey All that blood, I thought I was watchin’ @WalkingDead_AMC (even if @DowntonAbbey is way better than the overlong zombie drama) — Vieux Garçon (@Le_Gendre_Ideal) October 19, 2015

Regardless of how today has gone, seeing that vomiting blood clip from last night’s Downton Abbey has cheered me considerably. — Orange Monkey’s Paw (@Orange_Monkey) October 19, 2015