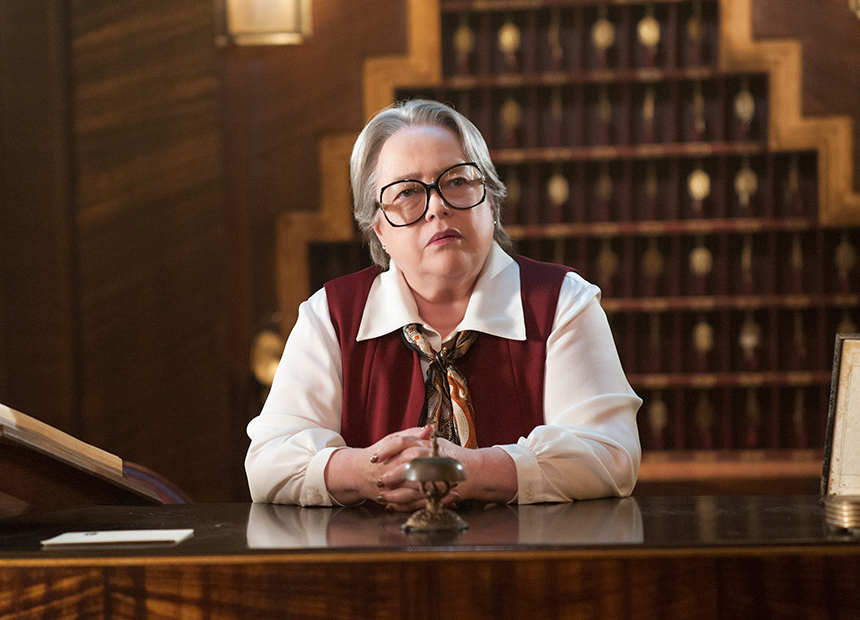 So begins the fifth season of American Horror Story – a multi-award-winning supernatural horror TV series that has captivated audiences around the world with terrifying tales, twisted allegories and graphic horror. Expect nothing less in this new season.

Using a regular cast (more or less) from season to season, each series explores the world of horror from a fresh angle. These perspectives of horror include: Murder House, Asylum, Coven and Freak Show.

As with previous seasons, stylistic clichés pervade the storytelling – perhaps a wink and a nod to classic, romanticised horror conventions, a la H.P. Lovecraft, Bram Stoker, Mary Shelley and co.

It’s familiar, in a sense, but not overly so.

Of course, it’s those same clichés that have some critics speculating on the value the show adds to the entertainment landscape. Valid or not, the series has scored 40 awards across a variety of fields for its efforts.

“You can check out any time you like, but you can never leave.”

The disturbingly titillating setting for the fifth season of this series is the Hotel Cortez: a beautiful art deco building swathed in shadows so deep it would make Stanley Kubrick swoon. While there are many demons dwelling within the walls, it soon becomes apparent that many guests have brought their own.

Add a few ghosts haunting the hallways and the odd underwear-clad day player, and the scene is set for a dream-cum-nightmare-fuelled tale of indescribable torment and, you guessed it, horror.

Also, there’s a drill-bit dildo-wielding demon (say that swiftly five times in a mirror to summon said demon), named The Addiction Demon, who rapes a male junkie, who is high on heroin.

“The more you scream, the more he likes it.”

The scene has drawn widespread criticism from both the public and critics, with many viewers declaring this episode the last they will ever watch.

Murphy added: “He is a representation of what people go through fighting addiction … it’s very powerful and strong.”

The only parallel parable this writer can think of is the horrific climax of Darren Aronofsky’s 2002 critically-acclaimed exploration of drug addiction, Requiem for a Dream, which tracked the descent of various characters into derangement, degradation and amputation. The clumsy depiction used by Murphy comes nowhere near Aronofsky’s masterful meditation.

Guests are welcomed by the inimitably talented Kathy Bates, perfectly cast as the hotel concierge who wields death stares as withering as her sarcasm. Her accomplice, a cross-dressing bellhop, adds a splash of colour to the growing character palette in a David Lynch kind of way.

Pop superstar Lady Gaga plays the Hotel Cortez’s resident several-hundred-year-old vampire, The Countess – likely a nod to serial killer Countess Elizabeth Bathory de Ecsed, who bathed in the blood of her victims in her quest for eternal beauty and immortality – who spends most of her time looking hot and exsanguinating other beautiful people.

Unlike other inhabitants of the music stellarsphere who take a sideways step into acting (looking at you, Rihanna), Gaga sashays through her role like she was, umm, born this way: her portrayal of the long undead matriarch refreshingly alive and surprising.

Humanity comes in the form of Police Detective John Lowe, who finds his way to the hotel after his family is harassed by a serial killer, bearing his own demons in tow.

Be warned: this season is evidently not for the squeamish. Apart from the obvious events mentioned above, the series’ special effects artists have clearly been given carte blanche to create shock-value au-go-go, rendering every vampire kill, deformed demon and evisceration in gloriously gory detail.

In time we’ll know if that license to thrill was worth the ride or merely a cheap tactic to generate internet buzz to attract voyeuristic eyeballs.

Note: editing of this program may vary depending on the region it is accessed.

Watch American Horror Story on Channel 11 or online on TenPlay, Netflix and Presto, and on DVD/Bluray on Quickflix. ‘I am not afraid’: The modern unknown soldier risks it all in Ukraine
Energy market reform will be a big boost for emissions reductions: Chris Bowen
Greens sign up for Labor’s looming jobs-and-skills summit as Liberals stick with boycott
Joe Biden’s $430b green victory for the environment
China cementing its Thailand ties with joint military exercises
NRL: Titans frantic to end 10-game losing streak as Manly showdown looms
American show slammed for ‘going way too far’
Today's Stories

You should watch this incredibly twisted show