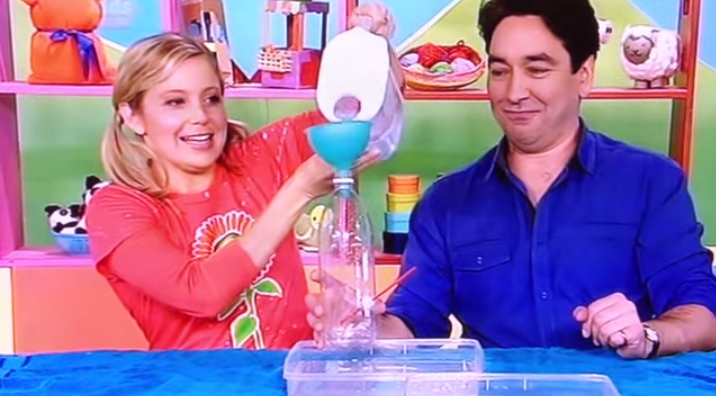 Long-running Australian television program Play School has amused adult viewers by airing an arts and craft segment featuring what very much looked like a bong.

The ABC children’s program, known for catchy songs and chirpy presenters, garnered some unwanted attention thanks to host Alex Papps, who built the very adult contraption.

The segment and the object has only just received attention on social media, even though it seemed to have aired at least two years ago.

Mr Papps took an empty plastic bottle, poked a straw through it, sealed it and then go his co-host to pour water into the top of it.

The resemblance to every stoner’s favourite piece of kit was uncanny:

Social media reacted to the segment with humour and surprise.

A Reddit thread titled, “Ok. Time for an ABC inquiry. They’re making bongs on Play School” was started on Thursday.

Responses included: “Inside the round window we see… hydro weed farms,” wrote RageGodReed.

“Next up Big Ted and Gemima are going to the convenience store to buy snacks,” wrote PointOfFingers.

“I have cut a circle in this red felt and now Big Ted has red around his eyes.

“Let’s all hop in this cardboard car and drive erratically to the shop.”

This is Alex Papps teaching my child how to make a bong. #abc2 #complaint #howverydareyou pic.twitter.com/swhtjlxkLL Wait. Is that a bong on Play School?