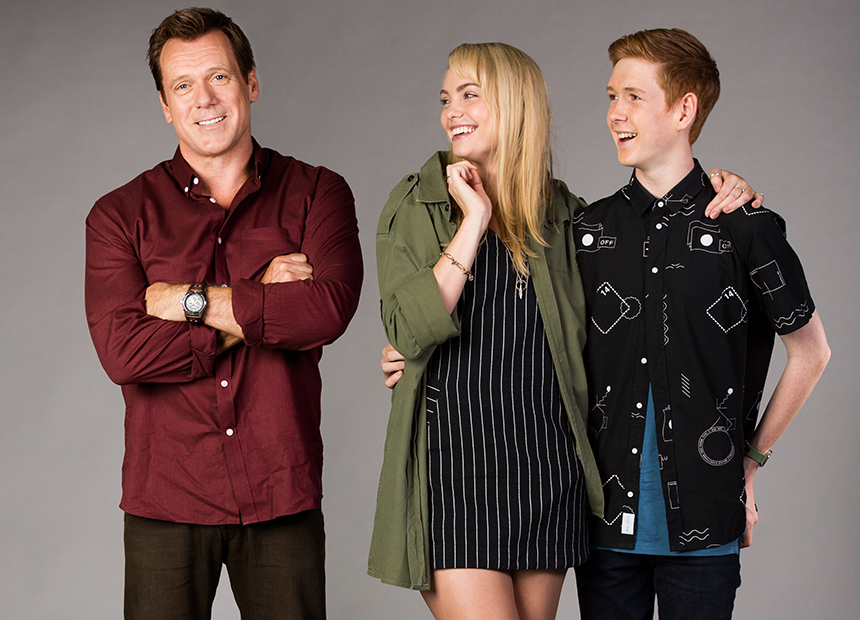 One of the top-rating shows on Australian television right now is a brand new series that looks somewhat familiar.

Seven’s 800 Words has consistently rated higher than its lead-in, The X Factor, with its most recent episode pulling a whopping 1.727 million viewers.

The show follows George Turner, a Sydney newspaper columnist who, after the death of his wife, decides to uproot himself and his kids and move to a small town in remote New Zealand.

• This is the best advertisement on television today
• Tired of Netflix? Here’s some great free TV
• Offspring drama continues on and off the screen

While the plot might not sound familiar, the subject matter is.

800 Words is just the latest local show to tap into Australian audiences’ fascination with themselves.

As a country, we’ve long loved drama series but our family dramas have a special capacity to grab ratings.

Perhaps this is because these shows provide a real sense of how Australian families see themselves.

For a real cross-section of the classic Aussie family unit and everything they aspire to be, the Australian family drama provides a glorious slideshow of our nation throughout time.

Here are some of the most iconic.

Generations before hashtags, The Sullivans gave us #16SeasonsAndATelemovie as it tracked the Australian suburban experience of World War II, particularly by the Sullivan family of 7 Gordon Street, Camberwell in Melbourne.

Hugely successful, only out-rated by a handful of foreign imports, the show contrasted real battlefronts with the home front and lasted as long as the war it portrayed.

It is indicative that as the mid-seventies offered up generational clash and social upheaval, it was a tale looking back to a simpler time of families united in crisis that soothed the nation.

Before Home and Away had its foster family and Neighbours had the Robinsons and the Ramsays, the drama of a shattered and reformed family tree was played out in the chaos of twins, separated at birth, who unwittingly meet and fall in love before their families can intercede.

The drama – season one encompassed everything from murder to corporate intrigue – was no longer a salve to calm an audience.

Now, like the Baby Boomers who watched it, it was aspirational, borrowing from the likes of Dynasty and Dallas.

Lasting six seasons and almost 1000 episodes, Australia lapped up the suggestion that we could be as exciting as Americans.

For a time the police, lawyers and doctors took over the Australian drama scene, while family was left to the soaps. But family was always going to come back.

So as Australia’s TV-watching population aged, and Baby Boomers contemplated how to stop working quite so hard, along came Sigrid Thornton’s Laura Gibson – a high-powered lawyer who resettles her children in backwater Pearl Bay after her husband proves not only unfaithful but criminal.

It was a huge success in ratings and among the Chardonnay-sipping chattering classes.

Now Seven have delivered an entirely fresh variation by making the protagonist in 800 Words a father, and replacing a tranquil Australian port town with a kiwi replica.

Girl power had won the nineties with the Spice Girls, then Australia recalled its bush ancestry as that stockman rode into the Sydney Olympic Games opening ceremony and the stage was set for McLeod’s Daughters. And boy – or rather girl – did they watch it in droves.

As the premise of The Odd Couple was relocated to the South Australian countryside with half-sisters Tess and Claire reunited and left to run their deceased dad’s cattle station, Australia went bush for eight seasons.

This was quite the achievement in the manic world of post-millennium Australian show axing, particularly given the contortions it had to twist itself into to justify new characters to fit its original premise.

Family drama hit a crisis as the television world from Friends to Secret Life Of Us recognised the death of the nuclear family unit and the rise of friends-as-family.

Almost the perfect response, Love My Way and its tale of the various families all tied in some way to tween girl Lou, broke so many rules in its first season that it is surprising they didn’t perform it in mime.

First off it was on Foxtel, which everyone knew would never make a really top-quality Australian drama – it won the AFI and Logie awards for Outstanding Drama for each of its three seasons. It was also set in Sydney which the industry knew was a no-no if you wanted Melbourne to watch.

And then (HUGE SPOILER WARNING – jump to the next show NOW if you haven’t watched) they killed Lou. And frankly everyone alive knows you never kill the kid.

Yet they did. And it worked. So well.

The relatively small season count had nothing to do with the popularity of the show, nor its quality, but was rather an example of a candle that burns twice as bright lasting half as long.

Meanwhile, on commercial television the sprawling family unsprawled back into the one household as Seven gave Dave and Julie Rafter their children back as an unexpected 25th wedding anniversary present.

Winning the Logie for Most Popular Drama four years running and dominating the ratings for Seven, Rafters spoke at once to the Baby Boomers who wanted their now-adult kids to fly the nest, and the Gen X and Ys who couldn’t afford a nest of their own.

Ahh the Proudmans. John Edwards, who created Love My Way, grabbed one of its stars Asher Keddie, and decided it was time for Australia to make a rom-com. The wacky, zany adventures of Dr Nina Proudman and her family had a simple message for anyone juggling work-life balance: yes, it’s impossible and chaotic and it will all go wrong, but that’s when the fun starts.

Offspring is the drama that Ten have clung to through some very lean years and have now announced will indeed return after the need for more quality (and audience) outweighed the need to not spend more money.

It’s too much of an over-simplification to suggest that if Offspring is for working women, House Husbands is for stay-at-home dads.

Mainly because the former audience love House Husbands too. Its tale of four fathers and their interconnected families and friends walks a fine line between the previous generation’s Michael Keaton Mr Mom gender reverse comedy, and the genuine drama arising from the new world of shared parenting. Why Australians are addicted to family dramas