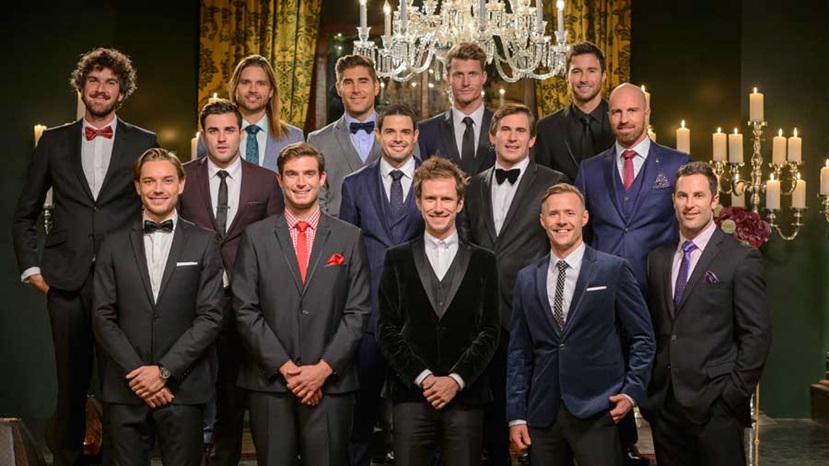 After a big build-up and plenty of expensive-looking ads, The Bachelorette Australia hit our screens for the first time Wednesday night.

The Australian version of the US reality hit has pitted 14 Aussie bachelors against each other in pursuit of the heart, head and possibly hand of chosen bachelorette Sam Frost.

• The Bachelor spoiler leaves regional fans fuming
• Behind the scenes secrets: on the set of The Bachelor
• Why The Bachelor is dangerous and hurtful

Frost was famously heartbroken by bachelor Blake Garvey, who proposed and then dumped her before The Bachelor 2014 series finale aired.

She’s now looking for love on the new series and hoping for better luck this time around.

Two of the bachelors vying for her heart are Melbourne’s Kieren Nicholson and David Witlof – and they have a lot more in common than just their hometown.

Both have striking looks, are exceptionally sporty and have been unlucky in love.

And neither had watched an episode of the US Bachelorette before putting their hands up to be in the show.

“I’d never seen an episode because I don’t watch TV much – I think I should have watched it a few times though before going in [so I knew what to expect],” Nicholson said, answering questions while skateboarding his way to La Trobe University where he is studying his Masters of Podiatry Practice.

He said a girl from his work (he works as an exercise physiologist) signed him up for the show.

When he received the call, he was interested in “checking it out.”

So how does a house full of blokes compare with the antics of the female-only houses featured on The Bachelor?

“There were a few times we had a go at each other, but they were a bunch of great blokes,” Nicholson said.

He said there is definitely a competitive nature to each of the bachelors, and drama that will play out over the coming weeks.

He said some of the bachelors were upping the romance stakes with mix tapes, music and other “trump cards” in the house.

Witlof, 32, an international model, had a move up his sleeve which he was sure would impress.

“Well, there was my Blue Steel look – but it totally backfired,” Witlof said.

His look, first made famous by Derek Zoolander, had Sam Frost in fits of laughter.

The slightly embarrassing moment was part of the promo for the show.

Despite the bruised ego, Witlof said he’s “rolling with the punches” and isn’t too worried about the public reaction to his debut.

The vibe inside the Bachelorette house was a mix between boarding school and building site, according to both Witlof and Nicholson.

While the men did speak about girls at times, the conversation moved more to work and motorsport.

“There was just a lot of s**t talk about cars and the stuff we’ve done like bungee jumping,” Witlof said.

“We spoke a lot about our careers as well – one of the main things you want to learn is why people are here – every single guy came for a different reason.”

Witlof said his lack of success in relationships led him to the show.

“I haven’t had many successful relationships in the past – so it was a good time for me and I had some spare time after I’d been overseas working so when the opportunity arose I had to take it,” he said.

Neither Witlof nor Nicholson are concerned about how they’ll be portrayed on the show.

So, what can Bachelorette fans expect? Boys do cry: inside The Bachelorette house