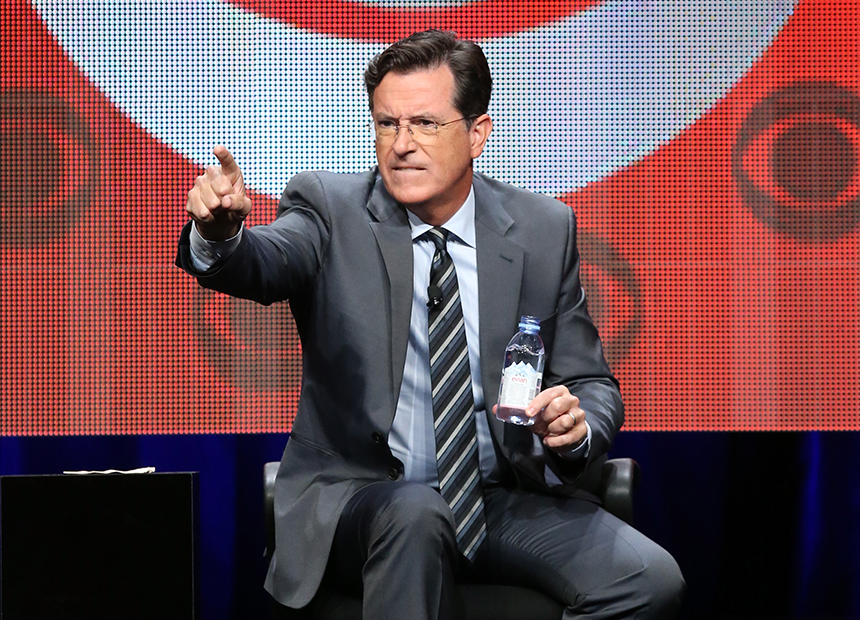 Stephen Colbert has refused to apologise for his routine on The Late Show. Photo: Getty

Stephen Colbert’s debut as the host of the Late Show with Stephen Colbert had the kind of lead-up usually reserved for a presidential election or inauguration.

Worldwide media attention, an official countdown in the news before the show – which hit the airwaves Wednesday afternoon (Tuesday night US time) – and an opening that featured Colbert singing the United States of America’s national anthem.

• The day David Letterman said ‘no’ to Murdoch
• Stephen Colbert to take Late Show in new direction
• Stewart v Colbert v Oliver: who is the best?

The pressure was on and critics poised. Colbert himself joked, “You are all witnessing TV history,” in his opening remarks referring to the show’s now retired host David Letterman as the “high (comedic) pencil mark we all measure ourselves against”.

He tore into Republican presidential candidate Donald Trump by eating a pack of Oreos as he showed clips of Trump saying he would never eat the chocolate and cream biscuits again because Nabisco had decided to move its biscuit factory from Chicago to Mexico.

While starting off on a serious note with first guest George Clooney’s work on bringing recognition to the genocide in Darfur, Africa, he tempered the serious with a wedding present for Clooney, who recently wed human rights lawyer Amal Alamuddin. It was a silver Tiffany’s paperweight with an engraving: “I don’t know you.”

It’s surreal to see @StephenAtHome on late night! So glad he’s here — it feels so right for #America

Second guest, presidential candidate Governor Jeb Bush, told Colbert he wanted to be President of the United States because “I think we’re on the verge of the greatest time to be alive but our government isn’t working”.

“I don’t think Barack Obama has bad motives, I just think he’s wrong on a lot of issues,” he told Colbert.

He also spoke about his success as Florida’s Governor in improving the state’s school results.

“That’s local though,” Colbert quipped, before adding: “So what can you do for schools other than the ones that have a picture of yourself up in them?”

Colbert also quizzed Bush on his mother Barbara telling the media that “maybe there shouldn’t be another Bush or Clinton in the White House”.

“I didn’t know about [that] – she never told me,” he said with a laugh adding that she was obviously joking.

While he offered a critique of President Obama, Governor Bush also offered his opinion of his brother, George Bush Jnr’s time in the top job saying he wasn’t fiscally conservative enough and allowed Republicans to spend too much.

Not impressed with #StephenColbert tonight. Sorry, wanted to like the new #LateShow but just didn’t.

The show ended as it began, with a big musical number and Colbert singing along with a cast of a dozen musos and singers.

So far, the reception on social media has been mixed, with some negative comments like: “Sorry but Stephen Colbert is awful so far – bring back Letterman” and “Maybe if Stephen Colbert had taken another year, say September 2017 to launch his first #Late Show there may have been an actual laugh”.

While online the critics were harsh, the pre-taped audience obviously didn’t agree, enraptured with the new host and chanting his name throughout the show.

Stephen Colbert back on the air to mixed reviews