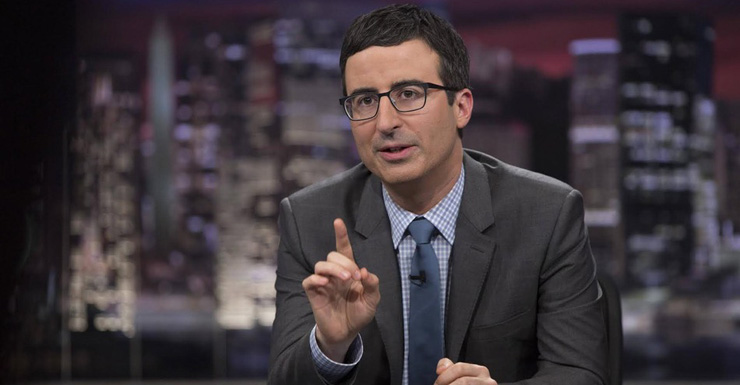 Old court documents emerged last week revealing Cosby admitted back in 2005 that he bought prescription drugs with the intent of giving them to women he wished to have sex with.

Despite the ongoing accumulation of disturbing evidence against the disgraced comedian, Goldberg remained a staunch supporter.

In a segment on Last Week Tonight with John Oliver that lasted barely more than one minute, Oliver tore into Goldberg for defending Cosby, and others.

He highlighted the fact that Goldberg had a tendency to give the benefit of the doubt — in spite of overwhelming evidence — to famous celebrities and friends accused of terrible acts.

Titled ‘Whoopi Goldberg defends 10 strange things’, the segment showed Goldberg defending Cosby; Roman Polanski (“It wasn’t rape rape”); the CIA’s use of torture (her argument being it has worked for other countries); Jesse James cheating on Sandra Bullock; Mel Gibson (“I know Mel and I know he’s not a racist”); and Chris Brown.

The controversy sparked last week when The View panelist Goldberg told those watching: “He has not been proven a rapist.”

Since then comedy producer and director Judd Apatow took to Twitter to encourage Goldberg to withdraw her support for Cosby.

Acknowledging Goldberg was trying to be a “loyal friend”, Apatow said, “It is sad that Bill Cosby is so sick that he puts his friends in that position”.

The court documents that surfaced last week were part of a deposition in a sexual abuse lawsuit filed against Cosby by a former Temple University employee Andrea Constand, which was settled confidentially in 2006.

The now 77-year-old Cosby has since been accused of sexual misconduct by more than two dozen women, including allegations he drugged and raped several women.

Matildas will be keen to forget 7-0 drubbing by Spain
Upcoming stats will reveal where and how hard rates are hitting economy
Victorian MPs pocket a tidy 2.75 per cent pay raise
Reserve Bank review isn’t a ‘get the governor’ exercise: Jim Chalmers
‘Violence for weeks’ feared after landmark US abortion ruling
Aussie Hannah Green within striking distance of Women’s PGA Championship lead
The Voice Australia: the 10 best blind auditions
Today's Stories