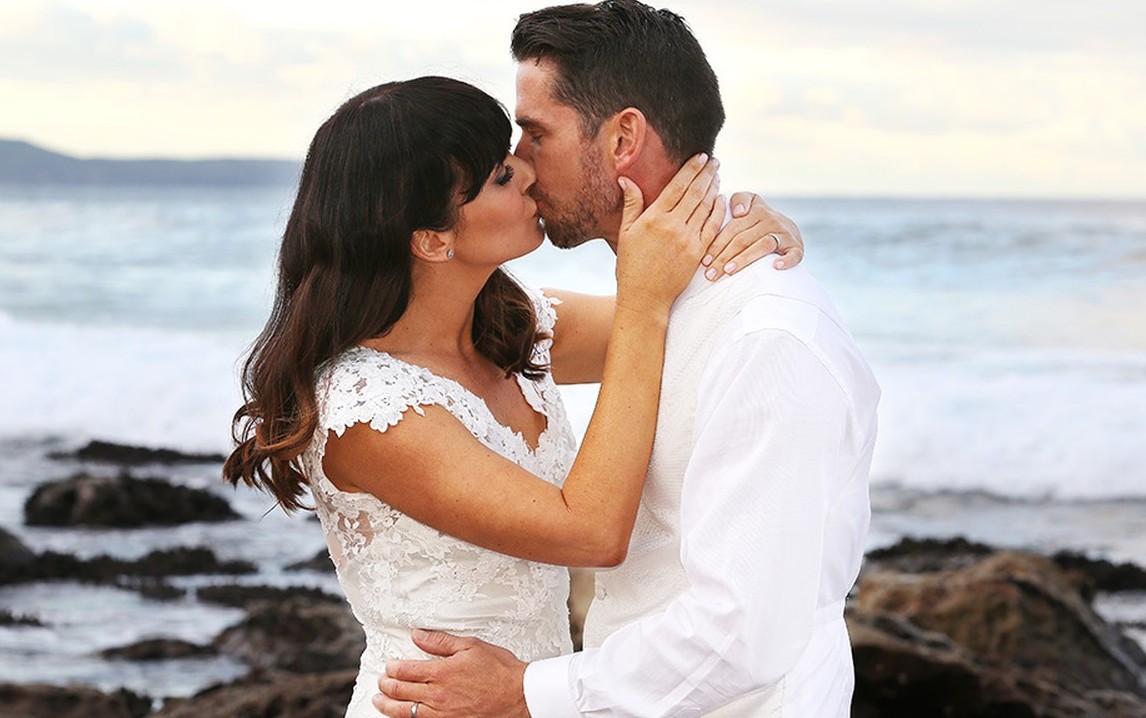 Haven’t we all been here? You meet. You say ‘I do’. You move in together for a month. Then you spend a few days apart to decide whether you have any interest in the other person whatsoever, before meeting up in a church to have a quick chat. Yawn. It’s the plot for every fairytale.

Still, you know what they say: marry in haste, regret on prime time television.

That’s right, Australia’s most Twitter-ragey social experiment/contrived reality format has finished, and on Monday night the producers answered the question we had all heard them asking us: will the couples stay married at the first opportunity to bolt?

It’s OVER! It was over last week in fact. He wasn’t falling in love with her, and seemed to consider that some sort of impediment to participating in this series. So he left.

Nonetheless, they did not participate in Monday’s finale.

She looks confused. That’s not a comment on her response to his storming out. That is seemingly her permanent facial expression in this show.

On Monday night’s finale, they start by giving the dog a good wash, which tragically is not a euphemism. Last week they said they were in love. This week he’s bought her some Ugg boots. Strewth! Then he carried her over the threshold of a cab.

It’s the “sorry” that has been heard in every promo since the first episoe. Literally. So of course it was a red herring.

ZOE – Is in. He has everything she is looking for.

He certainly has a future in reality television, but it may be as a host on MasterChef.

They were apparently blissful until Monday night, according to the voice of Sight. She is cooking. James has gone to ground. If the cooking is that bad surely takeaway would be less drastic than leaving?

The finale sees them go to a beach, for a walk and a talk. And they’ve clearly done a few takes of this impromptu moment based on the footprints on the beach.

He’s 99.9 per cent sure that she’s hot for his trot and they will leave the church a happy couple. Which proves he has never watched reality television before. You NEVER say that.

JAMES – I’m in love. Let’s go. It’s not like you even need to say anything! Right?

Michelle and James take a moment before leaving to express their enthusiasm. The sort of joy you haven’t seen since someone was last given socks for their birthday.

She is the black wannabe widow.

He is the cow whisperer.

They argue. She cries. He humphs. They kiss. They argue. Repeat. The finale shows them in a row boat. See, they row and they row – geddit?! Two words, one spelling. One rhymes with toe, one with cow? This is reality television for Rhodes scholars.

“Is it love?” ask the experts.

“I’ve told him silently that I love him,” Clare replies. Okaaaaaaay.

CLARE – “Nothings ever perfect,” says Clare and the writers at Hallmark gnash their teeth that they never thought of such a line. From her that’s a yes by the way.

LACHLAN – “I’ve had a bit of time to think about it,” says Lachlan before presenting her with a series of advertisements. Some hours later after we all contemplated whether a free loan car is actually free, he says yes.

What a simple finale, right? Wrong.

Gotcha! And you thought a reality show had finally decided it would be a good idea to have an efficient, honest finale. Sucker.

Are edited heavily to look like they’ve split up, so of course they’re still not-quite-hitched. They aren’t living together either. But they are in love. They’re also very much not pregnant which they tell us almost as though that has been a story going around the magazines lately.

He has grown a beard. She has gotten married … to someone else (though no one is mentioning that and she’s not wearing a ring – again it’s a magazine story). Apparently her other marriage was an obstacle Michelle wasn’t willing to overlook. Though it seems James might have been. Quelle surprise! A participant on this show with a flexible view on marriage.

Have bought a dog. This time it’s great news that this is not a euphemism. They said many words about being friends and in love. No one listened. There was a puppy. A puppy right there on the screen. Something about not living together. Yet. OH LOOK AT THE PUPPY. Something about kids on the table. But you know, PUPPY!!!! He’s mentioning fairytales and clearly promoting for next year’s victims.

So what have we learned?

It could be worse

In the US series, one couple has ended up with a restraining order in place. Here we’ve only had a phantom pregnancy, a secret other marriage and a societal indignity so fierce Nine have had the only successful new reality show this year.

Are great … in theory. Which is not to say they are bad in practice, just that we never really saw them IN practice.

Episodes featured clips of relationships intercut with relationship experts uttering broad generalist statements that may have been from a textbook or a fortune cookie.

“When one part of a couple is stressed it impacts on the other.” Hmmm. Profound.

No, these three experts never actually applied their expertise. Apparently they are the only people in Australia who are not willing to shamelessly judge each of these couples based on tiny, manufactured glimpses.

Wait. Wait. The experts finally spend some time judging the relationships. And they do so as a panel who look more like they’re about to try their Mystery Box challenge. Then again, in a sense they are.

So, finally faced with their guinea pigs, what do these Frankenmatchmakers have to offer? Questions that any reality host would be ashamed of: “How are you feeling?”, “How would you feel if he didn’t want what you want?”, “What have you agonised over in this decision process?”

It is impossible to know if these are underused experts or over-embellished extras. Bring back Dexter.

There was no mention of vows being confirmed. Or of a proper ceremony. Or of marriage at all really, let alone at first sight. But hey, the sandstone was pretty.

And what have we learned about marriage? It is about arguments. And bickering. Also arguments. Plus some fights. In between the arguments.

The only people who didn’t argue really were the ones who didn’t even make it to the finale.

Australia has said I do to this series and we are wed to it now.

It’s as though the nation stumbled home late one night, wanted something to digest while the room stopped spinning and without thinking opened a packet of Insta-marriage.

We know it’s not the real thing. We know it’s not good for us. If asked, we will probably deny consuming it at all. But it hits the spot. Especially that packet flavour of mild-spice mixed with future-regret. Yum.

Still, we know, some time soon we will yearn again for Insta-marriage. We will succumb. And that’s ok. As long as there is a puppy.

I do! What we learned from Married at First Sight