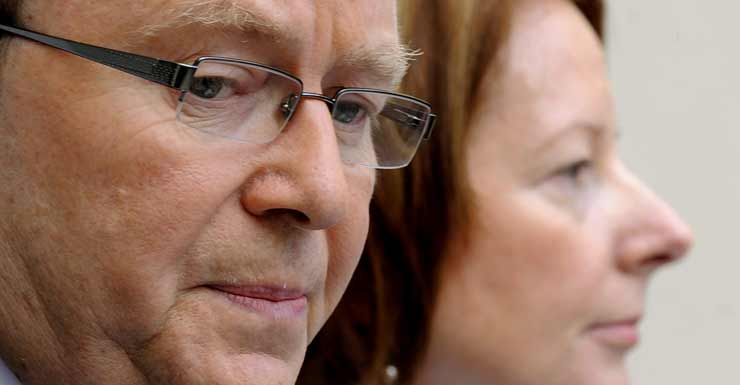 Former prime minister Julia Gillard was “ice cold”, said Kevin Rudd of the moment she walked into his office in 2010 to announce she would take his job.

The two Labor prime ministers will present their accounts of how the two-hour meeting unfolded, when the ABC’s series The Killing Season continues on Tuesday night.

Ms Gillard admitted she gave “false hope” to Mr Rudd when he asked for some time to fix problems with his leadership, namely bad polling and poor morale in the party.

• ‘What if’ moments that changed Australia forever
• Stickybeak: Inside Kevin Rudd’s house
• The Killing Season: how a dream team imploded

Mr Rudd said he proposed a compromise after two hours of discussion.

“If come the time of this election I believe I can’t win, then of course I would step aside. I have no interest in taking the Government over a cliff,” he said in an interview with the ABC’s Sarah Ferguson.

Ms Gillard gave her account of the same moment.

“I do recall a discussion about Kevin having more time and I participated in that discussion and gave Kevin some false hope,” she said.

Ms Ferguson asked directly: “Did you agree with Kevin Rudd that he could retain the Prime Ministership?”

“I don’t, no, I did not agree,” Ms Gillard said. “I can understand why Kevin felt that, you know, there was there was a … potential wedge of sun on the horizon. I should have been more straight forward and more clinical and less discursive. Being discursive did give Kevin false hope and that’s down to me.”

Mr Rudd insists they shook on it.

“She agreed … We shook hands. That’s not a wedge of hope,” he said.

Ms Gillard then left the room, spoke to her backers who assured her she had the support of a majority in the party, and returned to the prime minister’s office.

“She walked in ice cold, ice cold, with absolute determination in her eyes,” he said.

“It was a complete transformation in five or 10 minutes… by a person who I’d always supported in good times and in bad, as she has supported me, there’s something pretty gut-wrenching about all that, something which tears open your heart.”

The beginning of the end

The meeting started a three-year period of turmoil in the ALP, two more leadership spills followed and Mr Rudd finally regained the prime ministership in 2013 only to be voted out in a federal election.

“You always have choices but I don’t think there was any way of, you know, stuffing … the genie back into the bottle,” Ms Gillard said.

And Mr Rudd appears to agree.

“Once the dogs of war are unleashed, it’s very difficult to bring them back under control,” he said.

The Killing Season airs on ABC at 8.30 on Tuesday night.