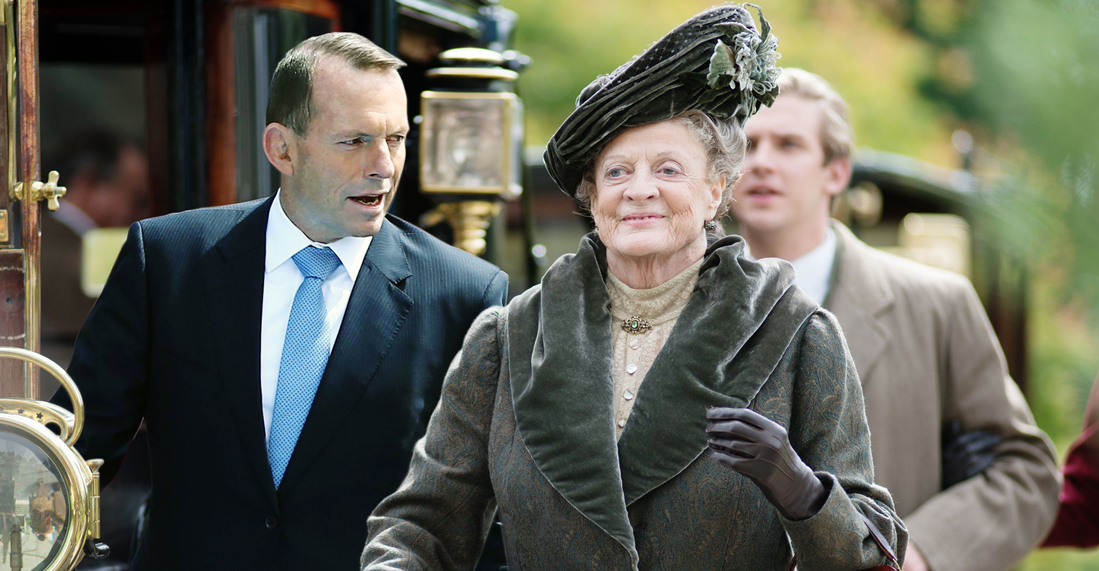 During an address to the Queensland Chamber of Commerce in Brisbane on Wednesday morning, Tony Abbott managed to slip in a mention of his nightly viewing favourite, Downton Abbey.

The Prime Minister has spoken in the past about his love for the British period drama, saying his favourite character is family matriarch Violet Crawley (played by Maggie Smith).

Mr Abbott’s little plug got us thinking – what do the rest of our pollies like to watch in their limited downtime?

According to Ms Bishop’s office, the Foreign Minister is a fan of political comedy series Veep.

With its sassy female lead, played by Julia Louis-Dreyfus, and its focus on the intricacies of foreign policy, Ms Bishop’s choice makes perfect sense.

True to his role as Education Minister, Mr Pyne probably enjoys the show for its informative retelling of the history of evolution. And perhaps all the wild animals remind him of parliament.

The Greens’ Federal Member for Melbourne told The New Daily he has a few favourite shows to watch, depending on his mood.

“I’ll rewatch Arrested Development when I need something witty, The Sopranos to remember how good TV can be and MasterChef to just tune out,” Mr Bandt said.

“I love The Newsroom because it really paints how the media is,” he said.

“I love the idea of a media team wrestling with an ethical issue on the fly.

Despite imposing a Netflix tax, the Treasurer is a subscriber to the video-on-demand service and an avid House of Cards fan.

When asked by Buzzfeed whether he prefers Claire or Frank Underwood, Mr Hockey said he felt a “bit torn” about Claire.

“You know, she’s party to a very machiavellian, quite an evil character,” he reasoned.

“Frank Underwood’s quite an evil character.”

It’s no secret the former PM loves the bloodbath fantasy series Game of Thrones. She’s even written recaps of the show for The Guardian.

But who does she want to claim the throne?

“I am barracking for the Khaleesi, the mother of dragons,” she told The Guardian.

During a Reddit ‘Ask Me Anything’ session late last year, the Co-Deputy Leader of the Australian Greens was asked what his favourite television universe was.

“Firefly. The one, and only Firefly. Because it’s perfect,” he responded, referring to the popular sci-fi series from the early 2000s.