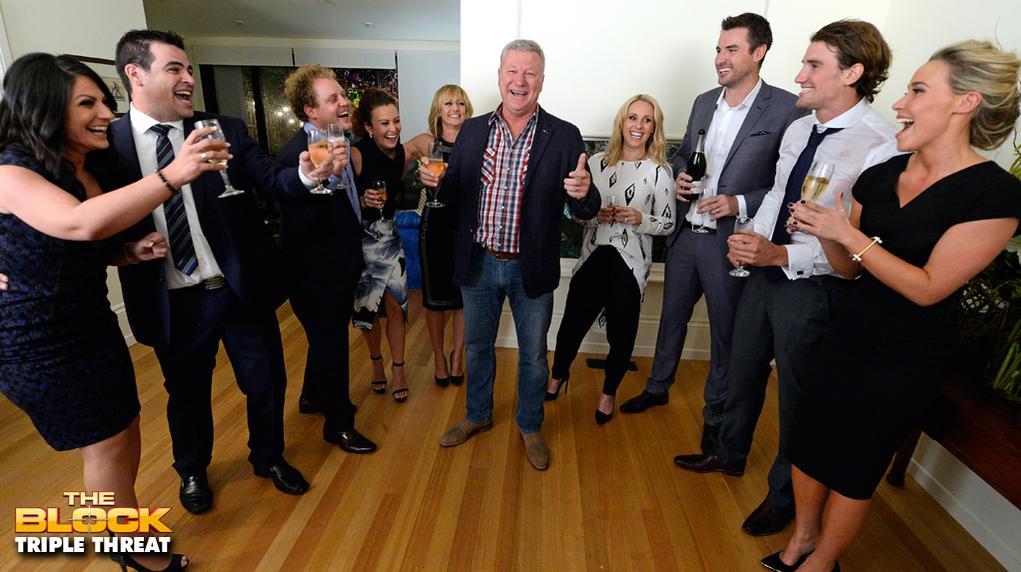 The four pairs of contestants took home a total of $3.16 million profit, which Channel Nine said was the highest sum of money ever given away on a single episode of television anywhere in the world.

The four furnished apartments created by contestants over the course of the show, out of a drab 1970s block of flats in Melbourne’s leafy suburb South Yarra, sold on average more than $760,000 above their reserves.

Former AFL star Darren Jolly and wife Deanne won the show after their apartment sold for $2.23 million, $835,000 above the reserve.

The couple also took home the grand prize of $100,000 for earning the most profit above their apartment’s reserve.

The Jollys were one of two teams from last year’s The Block Glasshouse series to win just $10,000 in profits for three months of renovations.

Is it second Auction lucky for our All Stars @DarrenAndDeanne? #TheBlock pic.twitter.com/4i4PTAeWpC

The results were a welcome relief for Adelaide parents, Tim and Anastasia, who struggled to finish their apartment because of budget woes.

It’s been a rollercoaster ride… Will @TimAndAnastasia end their BLOCK journey on a high? #TheBlock pic.twitter.com/CrTvmr4NnM — The Block (@TheBlock9) April 29, 2015

Has a passion for perfection paid off for @JoshandChar? #TheBlock pic.twitter.com/Pvm0UOPbfu — The Block (@TheBlock9) April 29, 2015

Do @aydenandjess get the highest profit and the last laugh? #TheBlock pic.twitter.com/M925x3iRrK — The Block (@TheBlock9) April 29, 2015

The profits from the sale of the four Triple Threat apartments in South Yarra was more than the Fans vs Faves season, where four teams took home a combined $2.4 million in profits.

Buyers agent and valuer Greville Pabst of the WBP Property Group, who also appeared on the show, said comparable sales of apartments in South Yarra ranged between $8,000 and $10,000 per square metre, while the block apartments fetched between $12,000 and $13,000/sqm, News Ltd reported.