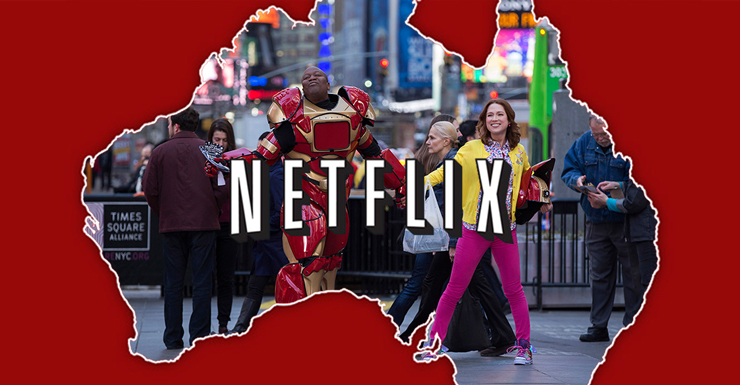 A major appeal of Netflix is a healthy stable of Netflix original content; that is, TV series and movies commissioned by the company, which are aired exclusively to subscribers first.

But don’t think we’re talking B-grade dramas and washed-up comedies. Netflix original series such as House of Cards and Orange Is the New Black have both earned multiple awards for their efforts, while simultaneously captivating audiences and inspiring other TV production houses to lift their game.

Along with a number of stand-up comedy specials, documentaries and full-length feature films, Netflix has truly defined itself as a service without peer.

What can I watch?

Here are some of the titles on offer…

TV: House of Cards, Orange Is the New Black, The Adventures of Puss in Boots, Upper Middle Bogan, Arrow, Miss Fisher’s Murder Mysteries and The Wiggles.

What SHOULD I watch?

Here are our top three shows you absolutely must watch.

Unbreakable Kimmy Schmidt: a hilarious and witty new comedy from Tina Fey (30 Rock) and Robert Carlock (Friends, 30 Rock), Unbreakable Kimmy Schmidt stars Ellie Kemper (Bridesmaids, The Office) as the titular lead, who starts a new life in New York City after her recent liberation from a doomsday cult. Expect an offbeat comedy with plenty of unexpected laughs and just the right amount of pathos.

Bloodline: Kyle Chandler and Sissy Spacek star alongside Australia’s own Ben Mendelsohn in this psychological thriller centred on the Rayburn family. When estranged brother Danny (Mendelsohn) returns home, the Rayburns are forced to confront a past they would rather forget.

Daredevil: “Another man’s evil does not make you good.” Based on the Marvel comic book saga of a blind lawyer turned crime fighter, Daredevil explores the moral ambiguity of vigilante justice and price that must be paid to bring those who choose the path of wrong to account for their life of crime.

To become a new Netflix subscriber log onto www.netflix.com

Netflix Australia: the shows you have to watch