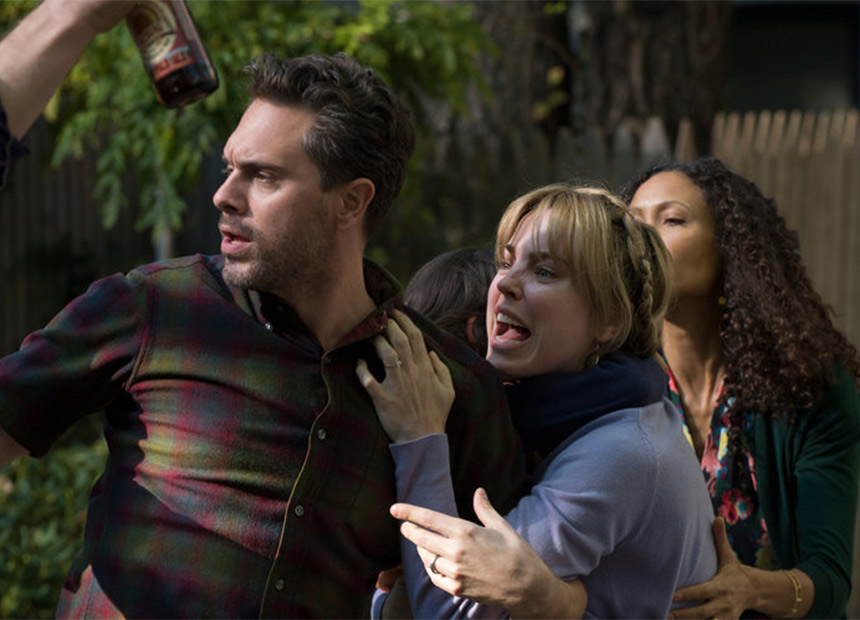 When Melbourne-based author Christos Tsiolkas’ 2008 novel The Slap became an international bestseller, the fraught debate surrounding the aftermath of one man slapping another family’s kid at a BBQ was clearly prime material for water cooler TV.

The subsequent ABC1 adaptation followed, to great acclaim, in 2011 and, in time-honoured fashion, despite a limited US release, the series has now been re-imagined as a Brooklyn-based class warfare drama with an all-star cast, directed by Olive Kitteridge‘s Lisa Cholodenko and penned by Jon Robin Baitz, who has written for Brothers & Sisters, Alias and The West Wing.

The first episode will go out on NBC on Thursday night.

Zachary Quinto takes over from Alex Dimitriades as the seriously angry Harry, the man responsible for the infamous smack that plays out from the perspective of everyone present at the family birthday BBQ that goes so badly awry.

Melissa George, who has been enjoying a fairly successful run on US TV shows, including The Good Wife, the short-lived but much-praised Hunted and Grey’s Anatomy, reprises her role of arty farty Rosie in the US edition, the mother of pesky Hugo who gets slapped in a pique of fury by Harry.

Speaking as part of an industry panel in LA, George said she had no hesitation in diving back in to the character.

“It was so difficult the first time around because it is such a difficult subject matter, watching all these actors go through the same thing that we all went through before,” she said. “It’s very confronting and I’ve never felt for a second that I’m repeating something or that the scene is the same.”

Tony Ayres, of Melbourne-based production company Matchbox Pictures, was the show runner on the original eight-part ABC mini-series. He’s looking forward to catching the US version, produced by the Universal Television, when it eventually reaches our shores.

“I’m curious to know what the differences will be between this and Australian one.”

Ayres praised George’s performance in the original take, and is keen to see how the role will play out in the US edition.

“She’s so great and she really owned that role. To see it again in a different context is brilliant.”

Initial reviews were largely positive. The New York Times said: “All the actors are good, but Ms George is particularly beguiling. As Rosie she is absurd, infuriating, sad and very funny,” adding that, “The Slap connects, but it’s not a harsh blow. It’s more of a bracing surprise.”

Entertainment Weekly said: “Zachary Quinto rivets as Harry, a manly materialist with a severe code and furious intensity, which he struggles to wield constructively… Quinto is strong, and most of the characters pique curiosity, even as they grate. You’ll watch The Slap. You might want to slap it yourself, but you’ll watch.”

Variety magazine noted that the 8pm Thursday network slot was difficult, particularly as the show has more of an HBO-style cable feel, but added: “The entire cast is first-rate and loaded with ready-for-primetime players.”

Time magazine’s James Poniewozik wasn’t quite as flattering. “This show will get people talking about it even if it has to personally smack every viewer upside the head. I doubt, however, that they’ll be talking much about how good the show is… It’s a shame, because The Slap has the ideas and the assembled talent to make a better, subtler character exploration, but it’s brought down by ham-handed characterization and an assemblage of bourgeois-Brooklyn types that it’s impossible (even for another bourgeois-Brooklyn type) to care about.”

The US remake of ‘The Slap’ is tipped to shine