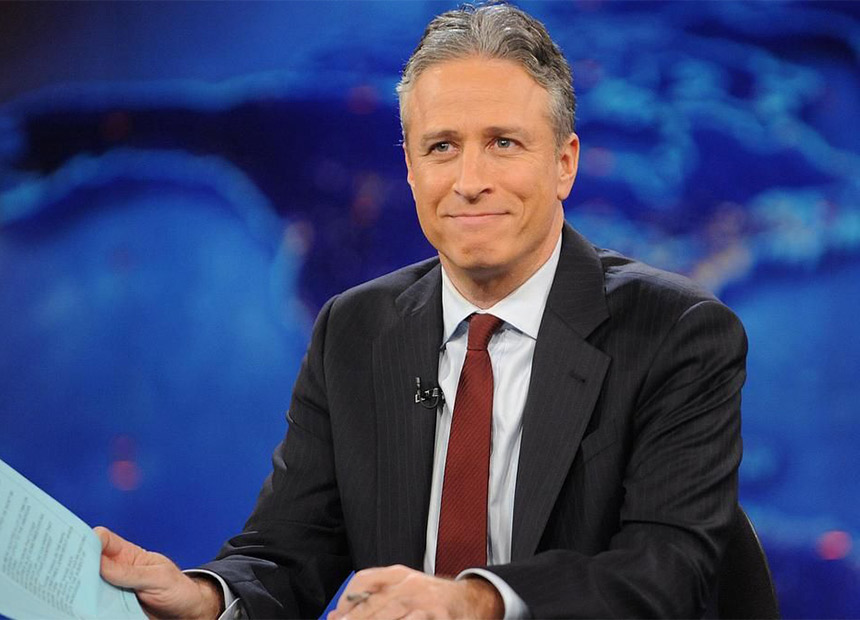 Since taking over hosting duties of The Daily Show in 1999, Jon Stewart has transformed the program into a cultural phenomenon and he has become the most trusted fake news man in America.

His departure from the show, which he announced during a live taping on Wednesday (AEDT), will leave a cavernous space in that entertaining place where satire and news meet.

We don’t know what his plans are next, but rest assured he won’t go far. After all, he is a comedian at heart.

· Jon Stewart to retire from ‘The Daily Show’
· The funniest man on TV is laughing at Australia
• Stewart v Colbert v Oliver: who is the best?
• Abbott butt of American talk show jokes

Under his direction, The Daily Show has won 19 Emmys and two prestigious Peabody Awards for outstanding journalism.

He also has become the go-to comedian to discuss serious political issues in the US, often struggling to keep a straight face during elections and championing the little people who are caught in the constitutional crossfire.

For Australians, as much as Stewart has shone a light on his home turf, he has often turned the camera towards our shores and laughed at the way our governments have done business.

We have loved Stewart for his passion, exemplified in his tearful introduction after the September 11, 2001 terrorist attacks in the US.

And we have belly-laughed along with him as his crazy correspondents ran rings around whatever topic or interviewee they were tackling – correspondents including Steve Carrell, Stephen Colbert and John Oliver, just to name a few.

To mark his farewell from the show, we look at some of Stewart’s best moments.

The Daily Show’s Indecision series covering the US presidential elections in 2000 and 2004 catapulted the show into the cultural mainstream. it became the hilarious outlet for people disenchanted with the hypocrisy and empty sloganeering of the political system. With his team of skilled correspondents, including Colbert and Carrell, Stewart was able to skewer the madness of the two campaigns that delivered George W Bush to the White House.

In the wake of the September 11 attacks on the World Trade Centre, Stewart made a sombre and heartfelt speech to his viewers reflecting on the role of comedy and satire at a time of national tragedy. It was sincere and it included the world in an event that had changed it.

The Iraq War has loomed large in US politics for much of Stewart’s time at The Daily Show and over the course of his tenure has consistently lampooned politicians and media outlets who have gotten their predictions wrong.

In 2004, Stewart appeared on CNN’s political debate program Crossfire and accused the program of “hurting America” by perpetuating empty political debate and “partisan hackery”. Within a month, Crossfire was cancelled with the CNN chief stating: “I agree wholeheartedly with Jon Stewart’s overall premise.” As Stewart later jokingly boasted: “I fought the law and the law lost.”

In 2006, Stewart and Stephen Colbert were co-presenting an Emmy award when they fell into a ridiculous routine about Colbert’s loss earlier that night to singer Barry Manilow.

From his Daily Show success, Stewart has hosted the Academy Awards twice to great acclaim. His 2006 opening monologue featured one of the greatest Oscar gags of all time: “Bjork couldn’t be here tonight. She was trying on her dress and Dick Cheney shot her.”

In 2009, Stewart voiced widespread public anger at the Global Financial Crisis (GFC) by directing his ire at CNBC financial pundit Jim Cramer, host of Mad Money, who would make flamboyant daily analyses and predictions of financial markets. Stewart accused Cramer, and the financial press at large, of luring the public into a false sense of security of the state of the economy in the lead-up to the GFC with his dubious financial predictions.

Another confrontation for Stewart came with controversial political commentator Glenn Beck. Beck, for a short period, became a cultural phenomenon in the United States with his highly inflammatory style. Stewart had a ball routinely skewering Beck’s faux professorial theatrics in making dubious accusations of the extremist left-wing agenda of US President Barack Obama.

Stewart has enjoyed a long-term friendly rivalry with Fox News conservative commentator Bill O’Reilly. Occupying wildly different positions on the political spectrum, the two regularly appear on each other’s shows to debate and spar on politics and American culture.

Rally to Restore Sanity And/Or Fear

In response to media sensationalism and growing partisanship in Washington, Stewart hosted a ‘Rally to Restore Sanity’ in 2010. The purpose of the rally was to satirise the scaremongering and grassroots political movements throughout America and to restore a sense of reasoned discussion in US politics. Held at the Washington National Mall, the rally was attended by approximately 215,000 people.

Because of geo-blocking, we were limited in the videos we were able to use for this story.