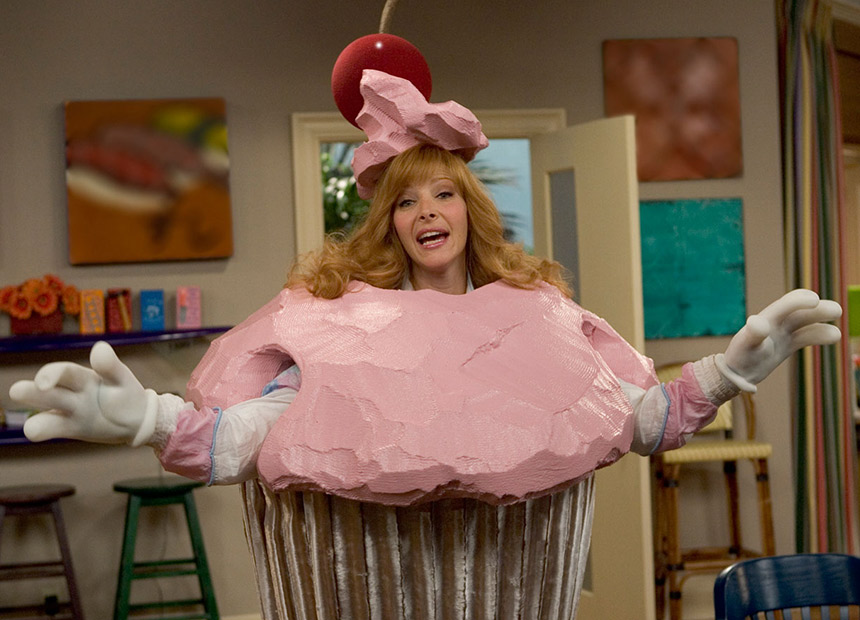 Whoever thought that there would be a time when we would be comparing the careers of Lisa Kudrow and Bill Cosby, your genius is apparent now.

The past month has seen both comedians hit the headlines, one for all the right reasons and one being Cosby.

· Netflix Australia vs Netflix US: what’s better?
· Is this Australian television’s best bloke?

While Cosby tries to defend himself against numerous sexual assault allegations, Kudrow has seen her post-Friends career surge with the revival of her HBO show, aptly called The Comeback.

Since her time as Phoebe on Friends, Lisa Kudrow has avoided conventional stardom and nursed her own comedic projects. One such project was the 2005 HBO series The Comeback, about a once-famous sitcom actress desperate to regain her fame through a reality TV show. Although the show received critical acclaim it was way ahead of its time and now, improbably, nine years later, The Comeback has gotten its own comeback, with Kudrow starring in a second series. Kudrow has very much found her moment in the spotlight … again

After being openly mocked as one of the worst cast members of Saturday Night Live, and for having a botched film career (remember Taxi?), Jimmy Fallon was seen as an unlikely choice to replace Conan O’Brien as host of Late Night in 2009. Yet in five short years, Fallon has enjoyed a meteoric rise to become host of The Tonight Show, by far the most hip and influential talk show host on television. The key to his success has been his ability to come up with far out celebrity pranks that have ensured his segments regularly go viral.

After reaching the pinnacle of the television world with Seinfeld, Julia Louis-Dreyfus spent several years with the ‘Seinfeld Curse’ starring in hackneyed and lame sitcoms like Watching Ellie and the New Adventures of Old Christine. However, since 2012 she has teamed up with BBC comedy genius Armando Iannucci to star in HBO comedy Veep as a bumbling and ineffectual vice-president. Her performance has received rapturous acclaim with three consecutive Emmy wins cementing her reputation as one of the great comediennes of her generation.

It can’t have been easy being famous as a child star. Indeed, for many years Neil Patrick Harris was singularly known for his role in the ridiculous Doogie Howser M.D. Yet from the mid-2000s Harris has been steadily building up an impressive repertoire, first as lovable rogue Barney Stinson on How I Met Your Mother and then for hosting the Tony Awards on five separate occasions. His status in the Hollywood elite was cemented earlier this year starring in the mega hit Gone Girl and as the chosen host of the 2015 Oscars. No one will be making any Doogie Howser jokes again any time soon.

Throughout his 20-year career, Alec Baldwin grew a reputation as a dependable leading actor with a ferocious temper, regularly becoming embroiled in scandals with the paparazzi. Having seen his career as a Hollywood leading man dwindle, Baldwin made the unconventional but ultimately inspired move to team up with Tina Fey to star in her series 30 Rock. His performance as network supremo Jack Donaghy was universally acclaimed and introduced audiences to his loveable ridiculous side, ensuring that his popularity was such that he could endure whatever media scandal he got himself into.

Having enjoyed a successful film career in his earlier life, Bill Cosby gained international fame starring in one of the most successful sitcoms of all time, The Cosby Show from 1984-1992. Cosby’s inimitable style and dress sense became cultural touchstones and were the source of endless comedic imitations. Earlier this month, US actress Barbara Bowman came forward and alleged to have been drugged and sexual assaulted by Cosby in the 1970s. In the following days and weeks several other women came forward making similar allegations against Cosby dating back to the 1960s. As of publication, around 20 women have made allegations against the star, and now, all remnants of his career have been taken off the air, with The Cosby Show being pulled from syndication on US television and NBC has apparently scrapped the sitcom it had in development with the 77 year old.

Following the astounding success of Seinfeld, Michael Richards tried unsuccessfully to kick-start a film career along with several failed sitcom attempts. In 2006, he was recorded at a stand-up gig in LA unleashing a racist tirade against an African-American audience member. The leaked recording would create a media firestorm from which Richards’ career has never recovered.

It was inevitable after the colossal success of Frasier that Kelsey Grammar would make a return to TV. In 2007 he teamed up with Everybody Loves Raymond star Patricia Heaton to star in Back to You, a sitcom about a pair of bickering Pittsburgh news anchors. It was cancelled after one season and since then Grammar, who never seems too far from controversy or turmoil, has made several unsuccessful attempts to relaunch his television career. His last starter was in the ill-received political drama Boss, which was cancelled in late 2012.

For a time in the early 1990s Shannen Doherty was a Hollywood ‘It’ girl starring in Beverley Hills 90210, but her well-publicised fallout with her cast mates lead to her premature exit from the show. While her exit did not precipitate a successful transition into film, she remained well known for her diva-ish behaviour and celebrity spats. She found minor success as a witch in Charmed, but was cast out after a fallout with her co-star Alyssa Milano (remember her?). Cut to 2008 and Doherty made an in improbable return to the franchise reboot 90210, with former cast mate Jennie Garth. The series was not a success and Doherty has since starred in Dancing with the Stars. Yikes.

Another former Seinfeld alum who has failed to transition his career into new success. Alexander spent the early part of the 2000s starring in sitcoms that attempted to cash in on his Seinfeld popularity, but unfortunately series like Bob Patterson and Listen Up were cancelled after only one series. Alexander has since retreated into supporting roles and stand-up comedy tours, as well as a stint as the MC at Geoffrey Edelsten’s 2009 wedding.