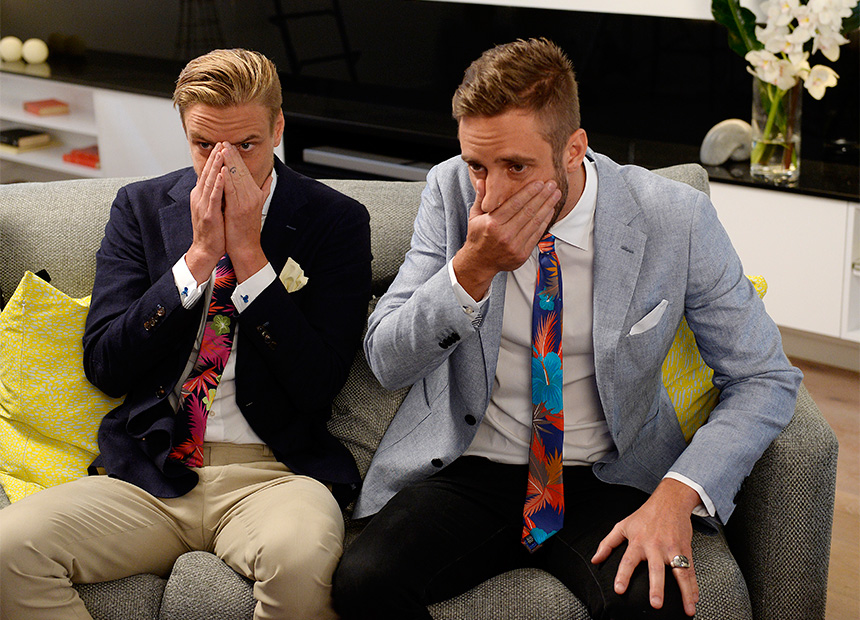 Almost 48 hours after being crowned winners of The Block Glasshouse, brothers Simon and Shannon Vos are still in shock, but they have little sympathy for the couples who left the series almost empty-handed.

In fact, amid calls for compensation for their impecunious fellow Blocksters, they say the three couples who did not fare well should not receive compensation from the Nine Network.

“We are emotionally drained. That was a really hard auction to watch,” the brothers told The New Daily.

“It was two weddings and then three funerals and my guts just got ripped out. It was very hard,” Shannon continued.

The other three couples on the hit show – Michael and Carlene Duffy, Deanne and Darren Jolly, and Maxine Stokes and Karstan Smith – were left shattered after only managing to win $10,000, $10,000 and $40,000 respectively from the sale of their luxury apartments.

All three couples were devastated, with questions raised about the reserve prices set on their apartments, and there have been rumours of fly-off-the-handle theatrics after taking home paltry amounts following months of back-breaking work and time away from children and family.

Reports ex-Collingwood footballer Darren Jolly was considering suing Nine after walking away with $10,000 for 11 weeks’ work were shot down by The Block’s creator Julian Cress.

“He played a game and he lost – he understands that better than anyone else.”

Game show or not, real estate is very real and the Nine Network cleaned up, proudly stating in a post-finale statement that The Block had reaped over $8.9 million in sales across the show’s nine seasons.

While Shannon Vos says he was genuinely “gutted” for his co-contestants, the rules of engagement for the show meant that huge windfalls were in no way a shoo-in for everybody who participated.

“It is a game I don’t think they should get compensation but I do really feel for them,” Shannon says.

“It was implied, because of the last one where everyone won so much money. It was unspoken and implied that everyone was going to clean up.

“It was just really bad luck, but, I’m sorry to say, it is a game and there can only be one winner.

“As easy it is for me to say that, my heart breaks for Michael and Carlene … but they took it in their stride and they were very generous.”

So what went wrong for Michael and Carlene, Deanne and Darren, and Maxine and Karstan?

“The auctions started so well and that’s exactly what Julian Cress, the producer, wanted. He was a bit sacred of Chris and Jenna going first, being the underdogs, but as soon as they hit $310,000 he said: ‘This is awesome, this is the exact start we want’.”

Shannon defended the reserves that were set, saying the independent valuer got it right for his own apartment and Chris and Jenna’s but said there just wasn’t enough depth in bidders for all five couples to take home slabs of cash.

“The money wasn’t in the room. I don’t think it was the reserves. We made $335,000 above our reserve, Chris and Jenna’s reserve was fine,” he explains.

“I just don’t think there was a deep enough buyer pool.”

From the sounds of Shannon’s response to whether he and his brother would return to the show in the future, there was a definitive “YES!”. It is possible that a deal with Cress might be in the process of being stitched up now for the future.

“I’d definitely be keen to do it again,” Shannon says.

“I wouldn’t do the next one because I know they’re filming now. I just got married two weeks ago so I don’t just answer to myself anymore.”

The divisive Jolly couple are believed to have been hand-picked for the next season of the show, this is despite being the worst-performing couple on this series’ auctions, but Deanne and her no-bulls***t ways was certainly the star of the Glasshouse series and will certainly draw big ratings for Nine.

Here’s hoping they get paid next time.

The Block victims ‘shouldn’t be compensated’