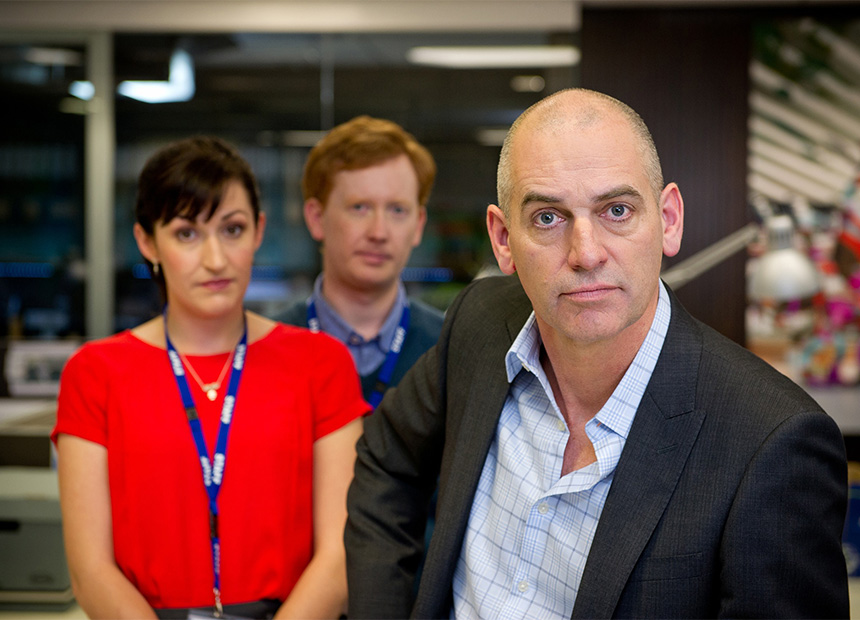 Working Dog is the safest bet on TV.

The team behind Frontline, The Hollowmen The Castle, The Dish and Thank God You’re Here must make it incredibly easy for the ABC and Network 10 to continuously invest in their shows and often offbeat ideas.

· Dark jesters: When comedy turns to tragedy
· Robin Williams: his 20 greatest roles remembered
· Bacall and Bogart: a life in pictures

With their new eight-part series Utopia, it appears Rob Sitch, Santo Cilauro, Tom Gleisner and Jane Kennedy have once again used their their talent and power to fashion together another ‘safe’ show.

Utopia is good but it is definitely not their best work.

Like The Hollowmen and Frontline before it, Utopia offers a behind-the-scenes look into an on-trend workplace. This time it’s the National Building Authority (NBA), a kind of bureaucratic hell where major government projects are sent to fester and well …. that’s the hard version.

This reality is that Utopia is actually a very light-hearted show about good-intentioned employees of the NBA trying to get massive infrastructure ideas off the ground and finding themselves stonewalled at every turn.

Unlike The Hollowmen, which was set in the Prime Minister’s office, co-creator Cilauro said it’s not meant to mirror any one current government department. But one is immediately reminded of the downtrodden National Broadband Network (NBN) when watching this, and you can’t help but think: ‘so this is how it all went so wrong’.

“This is a shows about dreams and how marketing has replaced building,” Cilauro says.

“It’s not a groundbreaking observation, in the same way that when we did Frontline people already knew what drove the cynical motives for current affairs producers.

“We just love the idea of short term gain for long term pain.”

Sitch (NBA’s CEO Tony) leads a cast of stand-up comedians, including Kitty Flanagan as the annoying spin doctor Rhonda, the talented Celia Pacquola as Nat – the straight woman in a sea of idiots – and familiar ABC faces Dave Lawson and Luke McGregor as struggling offsiders.

“There’s an immense amount of absurdity on a personal level inside any office, and in any workplace. That kind of mirrors the absurdities of what is going on in a planning level,” Cilauro says of their take on the building process.

Sitch is great as the comforting leader of this, at times, ridiculous rat pack. Another stand-out character is Tony’s suffering PA, Katie (played by Emma-Louis Wilson), who genuinely does not seem to have any idea what’s going on.

Working Dog have a gift for creating memorable roles and it’s Tony and Katie that stand out in their latest TV sojourn.