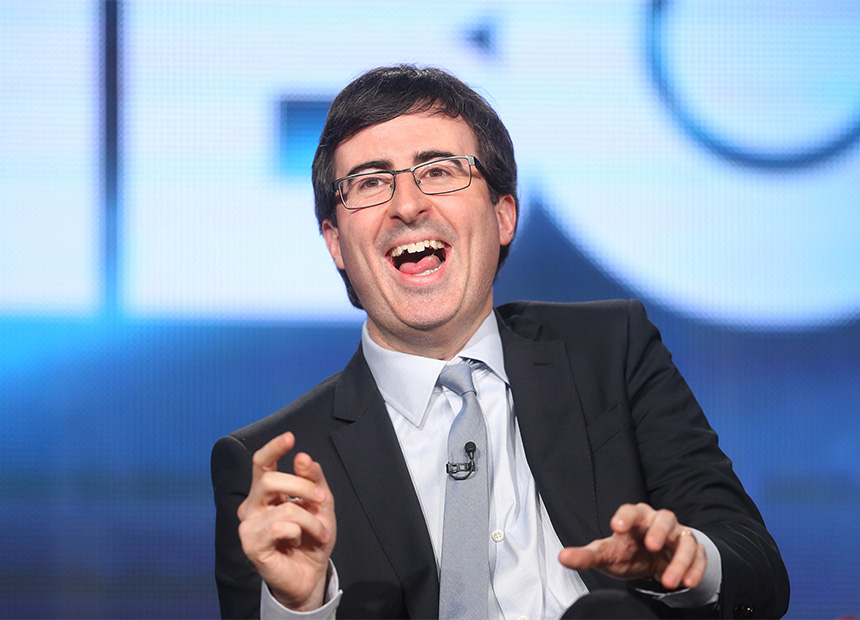 Since joining The Daily Show in 2006, Oliver enjoyed a meteoric rise to become the program’s number one ‘correspondent’.

What makes Oliver’s pieces so effective and so funny is that he dissects issues with a comedic facade but the stories are deadly serious.

During the US summer of 2013 he guest hosted the show for eight weeks and such was his success, he was offered his own weekly news program on HBO, Last Week Tonight with John Oliver.

· Dead funny: When did comedy become the news?
· ABC’s Gruen Transfer cancelled for 2014

He is fast superseding his brilliant former boss Stewart and legendary stablemate Stephen Colbert, who is replacing David Letterman when he retires at the end of 2014.

Distinct from The Daily Show, Last Week allows Oliver to dissect two topical news stories every week, with great effectiveness: since premiering in April, Oliver’s weekly segments have attracted online viewers into the millions, and have consistently trended on social media.

What makes Oliver’s pieces so effective and so funny is that he analyses issues with a comedic facade but the stories are deadly serious.

Whether he’s interviewing former Australian Prime Minister John Howard on gun control or poking holes in FIFA, he comes across as being inexplicably confounded by what makes powerful people and organisations tick.

And although he has a US green card – and clearly loves being an American – many of his best moments have international scope, which massively broadens his appeal.

We look back at the moments that made Oliver a superstar:

In a three part series that many consider to be his masterpiece on The Daily Show, Oliver wryly dissects the insanity of the gun debate in the US by travelling to Australia and exploring our own experience with gun control: interviewing former Prime Minster John Howard on his gun control legislation from 1996.

Tony Abbott, President of the USA of Australia

In a segment entitled Other Countries Presidents of the United States, Last Week Tonight profiled our very own Tony Abbott (what is it with John Oliver and Australia?), summarising his politics as being ‘pro –business’ and religiously anti-immigration, emphasising that Australia is for ‘real Australians’, like Abbott, who was born in London.

Oliver surveyed our political landscape in the lead up to the 2013 Federal Election. Firstly, he marvelled at the four-week election campaign. Before gleefully profiling some of the more ridiculous politicians in our midst, including Peter Dowling, the Liberal-National party member who sent explicit text messages of his penis in a glass of red wine to a former mistress, and One Nation candidate Stephanie Banister who referred to Islam as a ‘country’.

In the lead up to the 2014 World Cup, Oliver shares his conflicting feelings about the beautiful game in light of the comical levels of corruption of it’s governing body, FIFA. He examines the preposterous level of power FIFA holds over the tournament and the host nation.

In a recent episode of Last Week Tonight, Oliver ranted on the decidedly unsexy issue of net neutrality. Oliver railed against the Federal Communications Commissions (FCC) attempt to create a two-tiered internet system: essentially allowing internet providers and big companies to buy their way into an internet fast lane – one that would effectively slow down the internet for everyone else. Within days of the show airing the FCC website crashed.

Who do you think is the funniest person on television right now? Tell us below.

This Week Tonight airs every Monday night at 6:30pm on Foxtel’s Comedy Channel.

The funniest man on TV is laughing at Australia