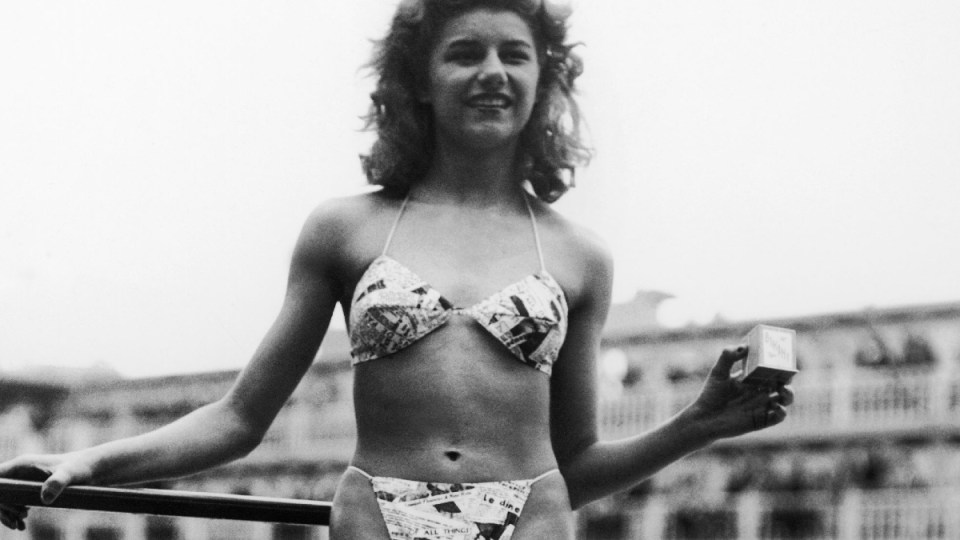 Dancer Micheline Bernardini modelled the first bikini. It was so small it could fit into a matchbox, like the one she held. Photo: Getty

They were itsy bitsy and teenie weenie – yet had the power to blow up the fashion world.

These days, the two-piece bathers – initially named by rival designers as the ‘atom’ and ‘bikini’ – are a summer staple on beaches from Bondi to Barcelona.

But imagine, just for a moment, being back in 1946 when it was really only wartime pin-up girls showing that much skin.

On this day that year, 19-year-old exotic dancer Micheline Bernardini strutted out on to the deck of a popular Parisian swimming pool, the Piscine Molitor, wearing nothing but four triangles of fabric over her private parts.

The stringed garment also showed off the model’s belly button.

French designer Louis Réard dubbed his creation the “bikini”, inspired by an American atomic test that took place off the Bikini Atoll in the Pacific Ocean that same week.

Another designer, Jacques Heim, had developed a competing prototype he called “atom” and advertised it as “the world’s smallest bathing suit”.

Réard’s swimsuit was significantly smaller – and he promoted his creation as “smaller than the world’s smallest bathing suit”.

So tiny was it – and so likely to stir controversy – that the designer could not find a model who dared to be seen in public in his creation.

A dancer at a casino, Bernardini was used to baring her skin so didn’t mind that pictures of her belly button and bottom cheeks would hit news stands.

Her poolside appearance made waves in the fashion world and was seen as a moment of liberation for women, but also a symbol of freedom at a time Allies were celebrating the end of World War II.

Soon women across France, Italy and Spain were seen in tinier two-pieces (though Réard argued the bathers could only be called ‘bikini’ if they were strung together and small enough to be threaded through a wedding ring).

Some cities across the world were quick to impose bans on the skimpy swimsuit.

But prudish prohibitions were no match for the power of celebrity.

Six years after Bernardini was the first woman in a bikini, Brigitte Bardot made The Girl in the Bikini.

And in 1962, the original Bond girl, Ursula Andress, strode from the surf in a bikini with a knife holstered on her hip.

There was no stopping the bikini taking off after that.

On This Day: Itsy bitsy bits of fabric, named after nuclear tests, blow up fashion world