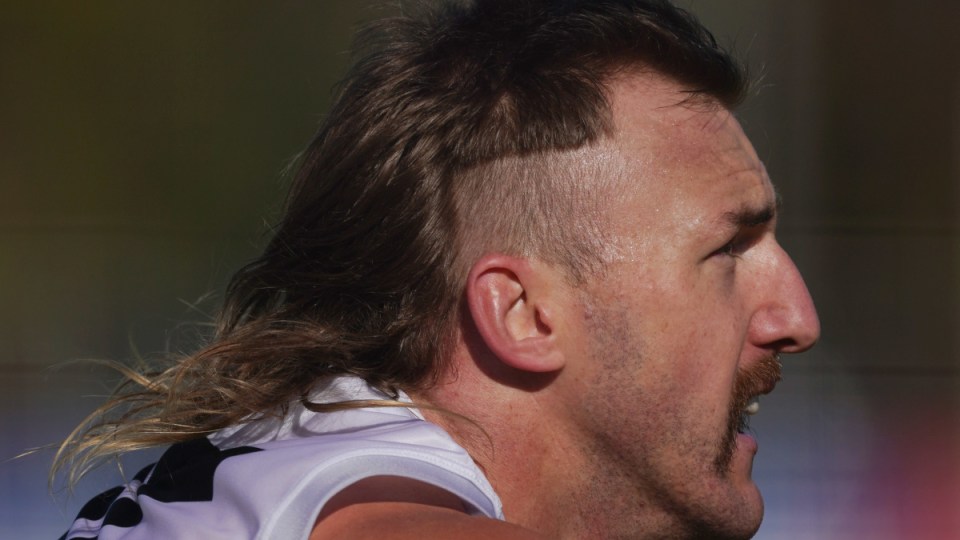 From sports stars to teen mallrats, the mullet is having a moment. Photo: AAP

On a quick mid-week mini holiday in Port Macquarie this week, I was walking along the shoreline watching all the local kids on their bikes and skateboards when it hit me. Maybe I’m late to the party (at the back) but The Mullet has most definitely made a return.

Most of the young boys, from about 12 to 17 were sporting mullet haircuts, but with a 2021 twist. These were not the tizzy Mel Gibson/ Bill Ray Cyrus type, with teased up fronts and long tendrils at the back. This current version is more like a riff on the Peaky Blinder, what looks like no 1 or 2 clippers at the sides, a flat short fringe, almost like a bowl haircut, with a stripe of thicker hair at the back, maybe a 3 or a 4 clip.

For those who have seen the series, the Peaky Blinder was a highly exaggerated short back and sides, which apparently originated in 1920’s Glasgow, the choice of haircut for street gangs and petty criminals who favoured the undercut because long hair could be a disadvantage during a fight.

This new mullet stops at the nape of the neck, it looks sort of tough and very easy to manage, a sort of modern wash-and-go style for your average coastal mall rat.

The mullet was popular in many guises in Port Macquarie: my Uber driver, who was probably in his sixties had a magnificent silver mullet, with a sort of Elvis style quiff in front, and long tendrils down past his shoulders (I think the sides were slicked back as opposed to shaved).

This particular style was also seen on the US Senator Ted Cruz last week, which prompted some hilarious internet reactions such as the delicious “Business in the front, insurrection in the back” comment.

Expel Ted Cruz from the Senate over this haircut. pic.twitter.com/EP1Cz0PKif

I later spied what I would call the Hulk Hogan mullet on another 60-ish guy on the beach, bright white with a very confident fringe and matching moustache.

As usual, the younger kids did it better and made it their own, a distinct improvement on the tortured versions we saw on heartthrobs like George Clooney, Rob Lowe and even Brad Pitt back in the 80’s and ’90s.

I don’t watch football, or in fact sport of any kind, but I am reliably informed by my sports-crazy sons that tons of big-name players sport mullets and that the style has moved far past irony and right into high fashion.

Frosted tips are also a thing. Women, of course, can also have variations of a mullet, but as I recall, we tend to recoil at that tag and instead call it a ‘shag’, a distinctive cut that I in fact sported at my Year Six formal, accessorized with clogs.

In an inspired initiative, the Black Dog Institute has introduced Mullets for Mental Health and is encouraging people to shape and grow a mullet for the month of September to raise much-needed funds for mental health research.

So, go the mullet – also much more interesting to look at on a Zoom call.

Kirstie Clements: The mullet has returned, but there’s a 2021 twist