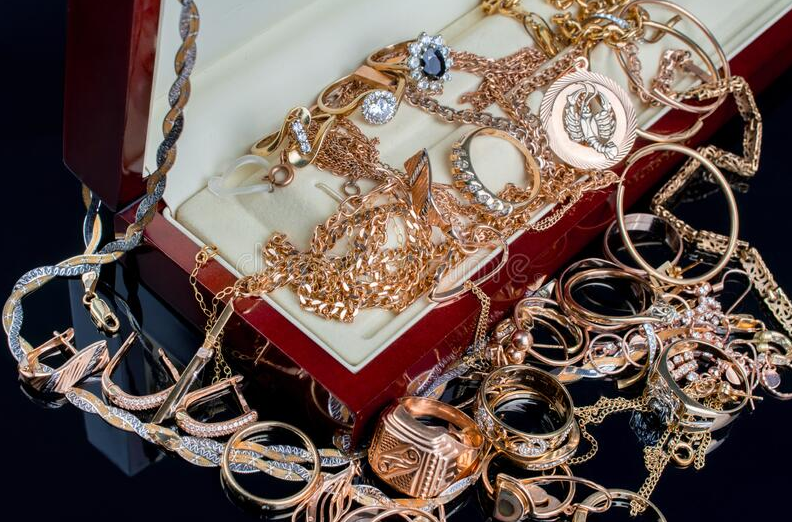 All that glitters might not be gold after all. Photo: Dreamstime

A good friend of mine, who is a very smart dresser, always wears a piece or two of beautiful, unidentifiable jewellery to complete her look. Nothing flashy, nothing with a brand name, just elegant, interesting pieces that stop you in your tracks.

One day it might be an articulated gold Italian bracelet from the Sixties. The next, a vintage blue crystal necklace or coral and gold earrings.

On a weekend away I noticed her propped up at the kitchen table with a mug of tea and scrolling on her iPad. When I investigated, she was placing bids in on-line jewellery auctions. Ah-ha, that was her secret! I was immediately intrigued, then hooked.

What was not to like about jewellery auctions? You can have such fun browsing the various auction house websites for hours, looking for unusual pieces.

Then there is the thrill of placing the bid. Will nobody else notice this hidden gem? Will it end up going for a song, with you as the lucky sole bidder?

Apart from the lure of a bargain, there is the romance attached to the items. Who was the woman who wore and loved this piece before, what is its provenance? How lovely that this jewellery will be purchased and worn again, not left to lie unloved and forgotten in a drawer.

I immediately sprang into action. As with most things in life, I decided I was an expert after about 15 minutes. No, no, Julieanne my dear friend, I don’t need your help – I can navigate myself around the online offerings, thanks very much.

I, too, would amass an enviable vintage and costume jewellery collection and do it in next to no time.

A couple of weeks later, I saw a pair of pink ruby stud earrings listed. They would be mine! I placed a modest bid and the bid was with me. It feels like you’ve won something already. I watched it go up in price nervously over the next few days, and then joined the live auction, lying on the couch for hours waiting for the rubies to come up, then bid furiously. I won! These priceless rubies were now in my possession – and for next to nothing.

I drove to site to pick them up, announcing “I bought the ruby earrings” proudly to the auctioneer as if I were Elizabeth Taylor on her fifth marriage. He brought them out. I needed a magnifying glass. If I said they were the size of a match head, I’d be exaggerating. It turns out I have a very big problem with recognizing scale.

Later, I bought an enamel beaded and metallic neckpiece for $90 that had a glamorous Sixties Egyptian vibe, but when it arrived it was more of a breastplate – handy, I suppose, if I wished to play Cleopatra in an amateur theatrical production, which I don’t.

A pretty Victorian turquoise ring was next , in rose gold and dotted with seed pearls. Again, out came the magnifying glass, not to mention that it is so tiny it would have to be worn on a pinky finger. Clearly it belonged to a Victorian child.

Anyway, creepily, they are now in my drawer. Unloved and forgotten.