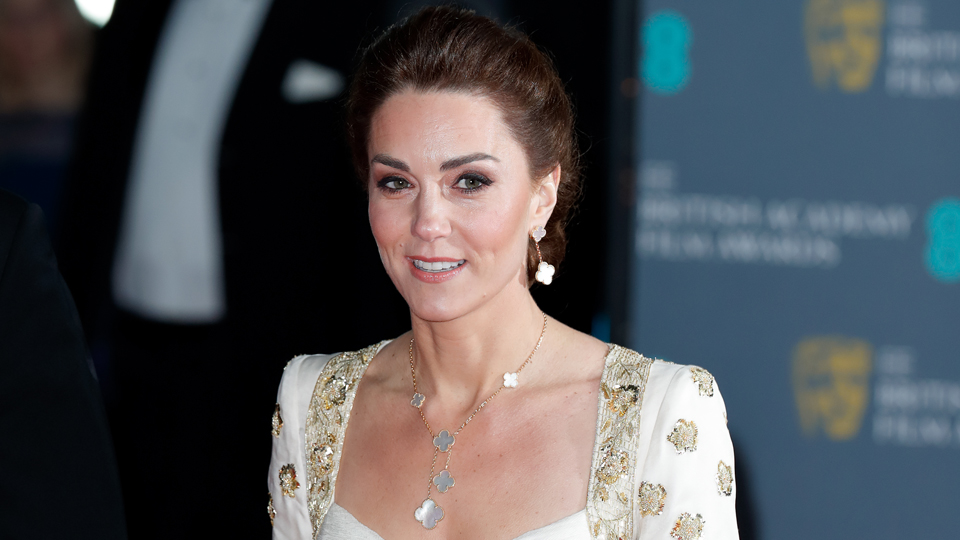 In the name of sustainability, stars hitting the red carpet at the BAFTA Awards 2020 at London’s Royal Albert Hall were asked to wear something they already owned, something vintage or a hired outfit.

Most stars appeared to ignore the theme directive, but not so the always appropriate and on message Kate Middleton.

With an extensive back catalogue to dive into, the duchess led the way in a gold and white Alexander McQueen gown first worn during a royal tour of Malaysia in 2012.

The melange of empire line bodice and A-line skirt was daggy then. It’s still daggy. Kate looked like Princess Anne had done her hair and Princess Charlotte had chosen her sparkly shoes.

The peplum on Margot Robbie’s Chanel lace gown suggested it was a re-wear or something from the archives so, tick, but it also looked a bit like she’d given up on life.

Florence Pugh’s Dries Van Noten coat is from the designer’s current collection, so she broke the sustainability rule. For starters.

Thanks to the contrast of her casual maillot-style scoop neck and beading on her sophisticated sheath, Emilia Clarke was quite perfect.

Scarlett Johansson arrived via a Vegas revue on a cruise ship. Divine colour.

Rooney Mara was high fashion chic in Givenchy but as one Twitter user wrote, the star “is that Simpsons episode where Marge recycles the same designer dress at every function she attends but it’s so obviously the same outfit.”

Renee Zellweger is also arguably doing a Marge this awards season, sticking again to a retro fitted silhouette with dramatic neckline that was all my goals in Year 8 sewing class 100 years ago. If it ain’t broke, etc.

Lily-Rose Depp was in a Chanel dress jumpsuit that may have come to her via an extra who wore it to whirl about in a jazzy Cats dance scene.

Rebel Wilson’s Prabal Gurung sequinned number was bold and can be repurposed for the next Essendon Football Club coterie fundraiser.

Ella Balinska was caned by the UK press for her winsome mullet dress with business heels. Although it had definite $75-a-night roadside motel shower curtain vibes, it was also quite stunning. You decide.

Laura Dern abandoned her usual prairie couture for a restrained gown and undone hair. Maybe a touch too ingenue but super pretty.

Zoe Kravitz did her red carpet robot thing again, in bodycon gold tailored to within an inch of its life. The scarlet colour pops were bang on.

Jessie Buckley would have walked in confident nobody else would be wearing her feather and velvet gown. It’s hard to be original and stylish in Hollywood, and she pulled it off although it fell firmly into the ‘romance repeller’ genre.

Olivia Colman is the pin-up girl for grown-up cool couture, tying embroidery and chiffon into one sophisticated package.

Kaitlyn Dever’s nod to sustainability was jacking the style of a second-tier Disney princess.

Gillian Anderson rocked it in a strapless velvet cocktail dress that literally could have been sewn yesterday or 50 years ago.

Alice Eve would have had trouble eating anything soupy or, in fact, performing any useful movement. I bet everyone had to stop themselves touching her shimmying fringes.

Charlotte Carroll was sensational, more for her hardcore party girl persona than her quite large bow. As the Lost in Space robot would say, “Danger, Will Robinson”.

In a sort of tailored Jedi cape, Naomi Ackie was the antithesis of the ice dancing obvious glamour of other stars.

And Richard Malone channelled his inner matador in a high-waisted pant and bolero plus the night’s most iconic shoe, as last seen on Rod Stewart on 1975’s Atlantic Crossing album cover.