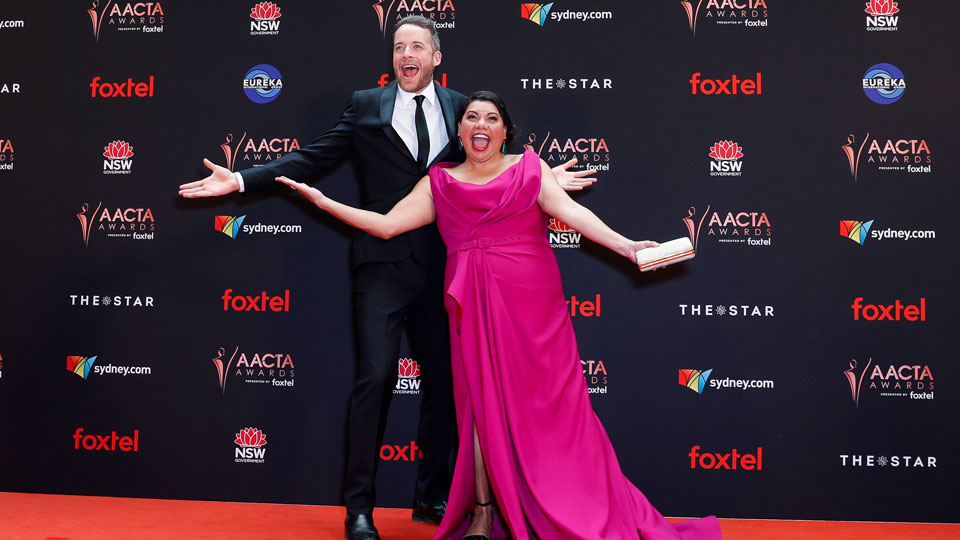 Winners Hamish Blake and Deborah Mailman horse around at the AACTA Awards at The Star in Sydney on Dec. 4. Photo: Getty

The big winners from the 2019 AACTA awards at The Star in Sydney on Wednesday were Alison Bell’s The Letdown, Rachel Griffiths and Deborah Mailman’s Total Control, and Jennifer Kent’s controversial gothic dramaThe Nightingale.

Neill said he was slightly uncomfortable with a lifetime achievement award: “The lifetime thing sounds a little terminal, and I’m not done. I’d still like to put a few more runs on the board.”

Before the onstage action, stars showcased their red carpet looks with homages to the ’70s and ’80s, not-so-basic black and some dated tizziness.

Posting she was “turning the AACTAs into the BLAACTAs” Miranda Tapsell was fashion forward in a Macgraw cigarette leg pant and fringed top.

Alison Bell was in a class of her own, scooping multiple awards for The Letdown and wearing the night’s most covetable dress, a modest and totally hot kaftan with asymmetric sleeve, perfect dress and lurex hints.

Magnolia Maymuru was both princessy and slightly crumpled. This is how to do a ballgown, ladies: Pair formality with insouciance.

Phoebe Tonkin looked vaguely cultish. The bow was too small, the shoes a bit picnic after church.

Danielle Cormack tapped into the current mania for white shoes and hosiery. Robert Palmer wants his back-up dancer back.

Michelle Payne was quite grand and swishy. Would have preferred hair that was less minor European royal to add edge.

Leeanna Walsman channelled the ’70s in a halter dress with printed skirt. Tick. The clutch could have been more chic.

Alison McGirr also had the church sandal on with a deceptively complicated structural dress.

Jessica De Gouw was like the world’s most fantastic 1980s door bitch.

Sam Frost’s LBD was less L than she’s done before, and more classy.

This! Essie Davis smashed it. The flounces, the fabric, the hip-skimming A-line, the sleeves, the red lip … amazing.

Jacki Weaver also worked a Le Smoking variation. Again, I have a quibble with the shoe, and wish it was less enclosed.

And the AACTA winners included:

Best lead actress in a film: Aisling Franciosi (The Nightingale)