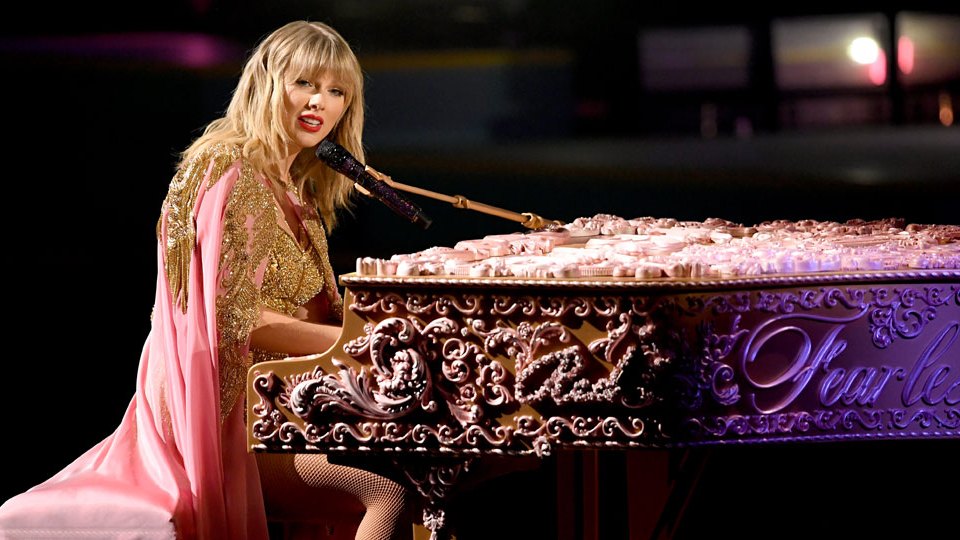 Taylor Swift performs a medley of her old hits at the American Music Awards in Los Angeles on November 24. Photo: Getty

Taylor Swift was the star of the 2019 American Music Awards, taking home five gongs including artist of the decade and beating Michael Jackson’s record of 23 by taking her career tally to 28.

Smashing out some of her biggest early hits after she was cleared to sing them, Swift used fashion to send a message to her arch nemesis Scott ‘Scooter’ Braun.

She kicked off her medley wearing a white shirt with the names of her past albums printed on it in a prison-style font, then mixed it up with a pink cape with circus-style gold leotard.

Swift’s deep emerald column was like a rowing zoot suit with half a curtain draped over it, teamed with a polite dominatrix’s boot.

In terms of statement dressing, Taylor had nothing on best newcomer Billie Eilish. Her head-to-toe Burberry look was modelled on hospital scrubs and teamed with a glittering beekeeper’s bonnet.

I feel we want to love Halsey’s frilly dress. Super feminine, but cool in a possibly alienating way.

Camila Cabello was washed out by her meh corset dress that looked like she was hoisting it up to pick her way over rough terrain.

Christina Aguilera was most memeworthy in a Jean Paul Gaultier vintage dress with intricate detailing, giant belt and shoulders and hood. Very Grace Jones and totally a moment.

Billy Porter was another fan of voluminous white in a Thom Browne two piece that channeled the Pope and a good Darth Vader. “I’m an American and this is what we look like,” Porter posted.

If you can get past her astonishing quaddies, Carrie Underwood was like a superhero meshed with an aspiring rhythmic gymnast. Or Maleficent having a big night out.

Lizzo followed suit in an apricot ra ra dress teamed with her own private joke: The world’s smallest bag. Which you may not be able to see.

Heidi Klum wore the nightie I bought for my second wedding from an adult shop in the ‘you will look awesome but tacky/desperate’ section.

Shania Twain decided I Dream of Jeannie hair, statement sleeves and a black mermaid skirt with trailing bits was the way to go.

Kesha was totally stylin’ in a Versace dressing gown and matching boots. Super rock and roll in a way the pretty frocks just weren’t.

Ciara wore 2003 jazz ballet pants with the night’s most unfathomable top and an oversized blazer in the shade I call ‘menopause blue’.

Tyra Banks also opted for the pantsuit, with a bra, Lisa Marie Presley expression, hat she wore home from Cabo and weightlifting gloves.

The big question is whether Lil Nas X spray-painted his boots. Now here is a man who falls into the category of ‘love to go to the disco with, less delighted if he turned up to take you out’.

“Tell em the law’s coming,” posted Diplo of he and Post Malone. Would that be the fashion police with sheriff’s badges?

Kelsea Ballerini drew the short straw and was the singer who had to come in the sequinned suit with nothing under it because, sexah.

After all those winners and losers, there were some real ones:

Artist of the Year: Taylor Swift

Favourite Music Video: Taylor Swift, You Need to Calm Down

Favourite Song Pop/Rock: Halsey, Without Me