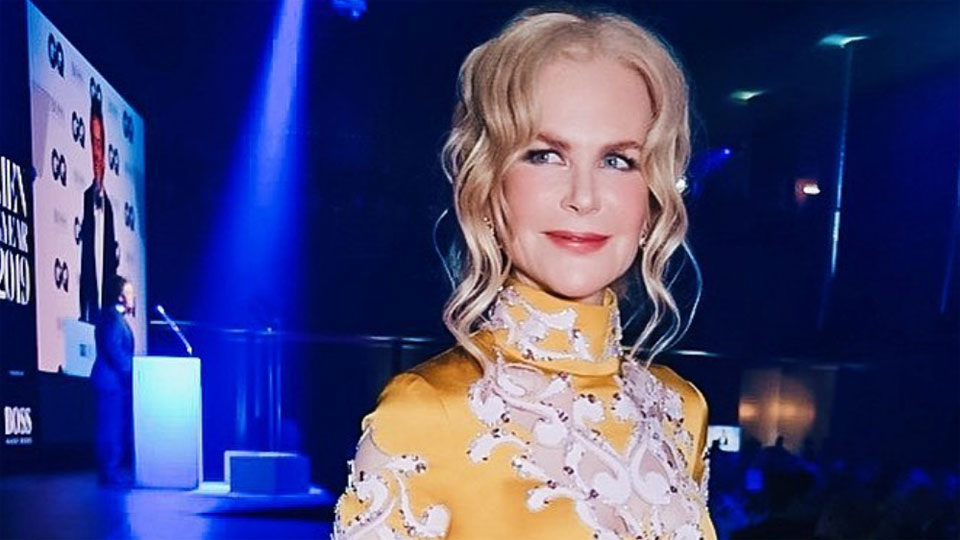 Nicole Kidman at September 3's GQ Awards in London where she won actress of the year. Photo: Instagram

The trusted glam squads – hairdressers and make-up artists – of Margot Robbie and Nicole Kidman have spilled insider secrets about how they get the Australian A-listers red carpet ready.

The squads told all for the Hollywood Reporter’s seventh annual look at the top celebrity prep teams, including those paid big bucks to look after Zendaya, Brie Larson and Scarlett Johansson.

Pati Dubroff, Robbie’s make-up artist, said that in 2019 A-listers have all been about authenticity.

“The need for a full-coverage look is declining,” Dubroff said.

Given Robbie has 16.7 million Instagram followers – nearly double that of the Sussexes or Cambridges – Dubroff and the Once Upon a Time in Hollywood star’s hairdresser Bryce Scarlett have their work put under a microscope.

But the pair, who have worked with the Gold Coast native since 2015, said this year their biggest spotlit moment wasn’t for a public appearance but Robbie’s birthday in July.

She says her team of two are “visionaries” and Scarlett told the Hollywood Reporter he’s “always dying to push boundaries and try looks that no one else is doing”.

He went back to the future for a lot of Robbie’s red carpets this year given her turn as Sharon Tate in Quentin Tarantino’s ode to 1969 in Los Angeles at the time of the Manson Family murders.

Dubroff says Robbie gives her “a lot of creative expression” but wouldn’t spill much about what fans should expect for the star’s upcoming PR tour for movie Bombshell.

Robbie stars with Charlize Theron and Kidman in the film about female employees at Fox News who burst the bubble on a toxic male culture and led to the disgrace of media mogul Roger Ailes.

All the make-up artist would let slip is that “the vibe will be quite different” to what they’ll do for Robbie’s publicity regimen for Harley Quinn movie Birds of Prey, due for release in February.

Robbie told THR her top red-carpet look of the year was for the Screen Actors’ Guild Awards in January, where she and her squad “kicked off the Lauren Hutton” theme they’ve developed this year.

The goal was the “effortless quality” the gap-toothed 1970s model made famous.

Dubroff has worked with Hutton so was already a wiz at her signature layered gold eye shadow and coppery peach lip.

Scarlett was inspired to give his celebrity client “polished and completely effortless” centre parted hair.

As for Kidman, she relies on Kylee Heath for hair – she also works with actor Kiernan Shipka – and Kate Synnott, whose other famous client is Cara Delevingne, for make-up.

Both artists have worked with Kidman, 52, since 2017, and say they take their cues from the Big Little Lies star’s fashion, which is guided by stylist Julia von Boehm.

For the upcoming Bombshell tour, Heath is planning “a blunt lob look – chic, sleek and modern” that suggests Kidman is going to lose some inches from her famous hair.

Synnott is aiming to showcase “fresh, glowy skin” for The Goldfinch star, who lives in Nashville with husband Keith Urban and daughters Sunday, 11, and Faith, 8.

The pair nominate Kidman’s look at January’s Critics’ Choice Awards as their top red carpet look of the year.

Nominated for her supporting role in Boy Erased, she wore an Armani Privé gown.

“Kylee and I wanted to keep the glam look effortless to complement the dress,” Synnott said.

“We went for a Bardot-inspired look with a ’60s eye” and half-up waves.”

The glam squad weren’t the only fans of the look.

It saw Kidman land on best-dressed lists and won nearly half a million likes from her 5.3 million Instagram followers.