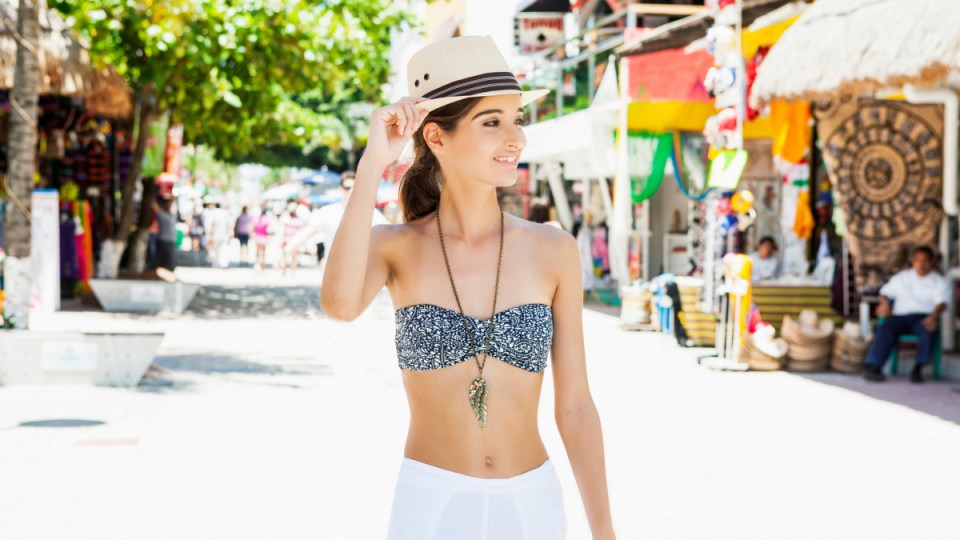 The rule is once you are two kilometres from the coast, put on some clothes. Photo: Getty

In the midst of last week’s sweltering temperatures, I made a dash to local Westfield shopping centre in Sydney’s Bondi Junction.

I was wearing a knee-length, blue, cotton caftan with cap sleeves that makes me like a hospital wardsperson, but I didn’t care. I’ve now lost the will to care how I am dressed at this point in the summer – I’m either in a cossie at the beach or at home in a very unflattering $10 singlet and shorts from Cotton On.

I can’t be bothered to reach down and do up a sandal, so thongs it is. I’ve postponed blow drying my hair, stopped wearing mascara, and am only persevering with pedicures because the salon is air-conditioned.

I looked at my fellow shoppers, who clearly also had lost the will to even try because everyone was just wearing anything. A large, oversized men’s shirt with cut offs and Birkenstocks. A patio dress. Exercise wear. Whatever was at the end of the bed.

And then I saw her. A young woman. In a bikini. And thongs. In Westfield. Wow! I feel like there are unwritten rules around this. You can wear absolutely next to nothing at Bondi Beach, but once you are two kilometres from the coast, we normally put on some clothes. You can’t be walking around the shops in a bikini in a suburb that has the word “Junction” in it.

I overheard her talking to her friend, in an Irish accent. Ah, that explained it. But maybe she was on to something. The lines are blurring about how casual you can be. I was having dinner at a Thai restaurant in Lennox Head, in northern NSW, last year, when a guy came in wearing board shorts. With no shirt. Barefoot.

I assumed he was picking up his takeaway, but no, he sat down at the table next to us and ordered wine. “Isn’t that odd?” I said to my friend. “It’s night. Shouldn’t he at least put on a shirt?”

My friend replied no, and shot me a withering look for my hoity-toity city ways, because he is a condescending hippy from nearby Brunswick Heads who doesn’t wear shoes. I was always taught that no matter if you are in your cossie in Ibiza, or Bali, or Cronulla, you popped on a shirt, over a cover up, once you sat down at a table to eat.

I presume for the more genetically blessed it’s a pleasure to sit there and display what nature and the gym, and potentially the plastic surgeon, gave you, but he wasn’t that much of a specimen to be honest. And it put me off my serving of Pad Thai.

As much as I would love to just rock up to Coles in my fetching Cotton On outfit, I don’t, mostly out of respect to the customers.

But well done to the Irish girl at Westfield, who was just enjoying the summer in full holiday mode.

It’s the most liberating feeling in the world to live your life in a cossie.

If the beach ain’t near, please put on some gear