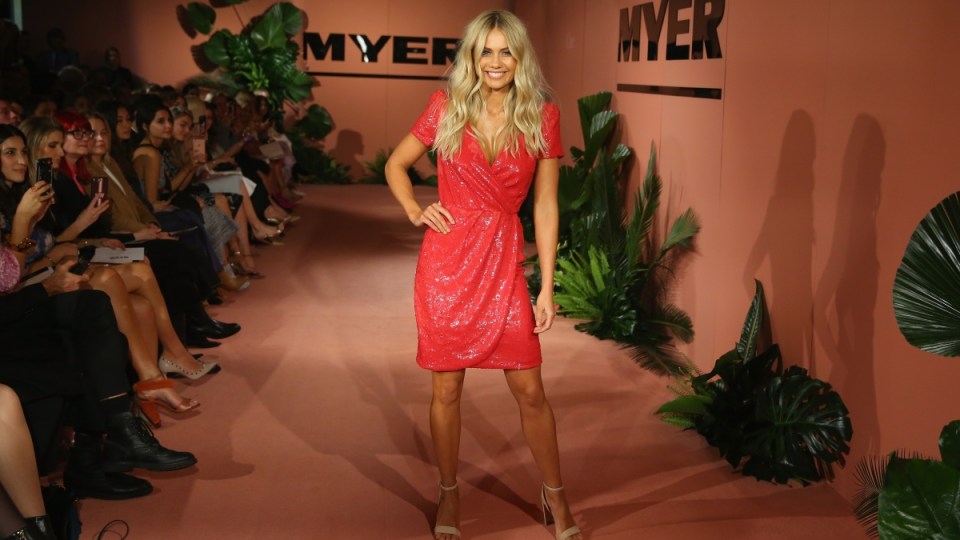 Recently announced as Myer’s ambassador, Elyse Knowles is no stranger to fronting a major label.

The 26-year-old has already had international success as the face of Seafolly, Aveda and Davidoff Cool Water after winning Channel Nine’s The Block with partner Josh Barker, 29, in 2017.

Speaking to The New Daily in a chic private styling room at Myer’s Melbourne store, Knowles is wearing a Stevie May long-sleeve lilac mini dress, with lattice trim and pleated frilled seams in the panels.

“It’s all about bold, block colours, botanical patterns and tropical prints this season,” Knowles told The New Daily of this year’s hottest looks.

The model, who has spent the morning walking her dogs Harlow, Isla and Indi along Port Melbourne’s foreshore, said spring fashion is about having fun and making best use of a minimalist wardrobe.

“Spending a little bit more on a few statement pieces with good-quality fabrics will last you for years to come,” said Knowles.

“You’ll find statement dresses from brands such as Stevie May, Talulah and Mossman.

“The beauty is you can dress them up and down in so many different ways, whether it be with sneakers, heels or by simply wearing an elegant millinery piece,” she said.

What’s in and what’s out: for Knowles, dull, flowing looks are done, and the time is now for the blazer and sequins.

“You can’t go wrong with a structured blazer with a wide leg suit pant or dressing up your denim with a little sparkle of sequins.

“This is key to embracing your inner-boss woman,” she said.

The Melbourne native, who made her Myer runway debut in September alongside retiring face Jennifer Hawkins, revealed it’s her “dream come true” to become an ambassador for the department store.

“I’ve actually been working with Myer since I was 16, and I’ve worked really hard to get where I am now,” she said.

“It’s a great opportunity to be a spokesperson for one of Australia’s most iconic fashion brands and inspiring others to become the best version of themselves.”

Knowles said she and partner Josh “grew as a couple” on The Block.

The couple spent 13 weeks last year working on renovations on their designated property in Melbourne’s Elsternwick and sold their winning house on the show to comedian Dave Hughes for $3.067 million.

‘It was a wild journey. I never thought I’d do that in my life. Josh and I really grew as a couple and it was a great platform for everyone to get to know the real Elyse,” she said.

“Reality TV is as real as it gets. But you never know how they’re going to edit or create a story – that’s the catch.”

Knowles said she and Josh are now focused on achieving more goals together as a couple.

“We want to keep at it with building and flipping the best houses that we can. It’s a lot of hard work and sweat, but we just want to stay in the  industry,” she said.

In her spare time, Knowles loves skateboarding around the back streets of Melbourne’s bayside.

“I just love skateboarding around the beach. I also love camping, motorbike riding, just basically anything that makes me feel alive,” she said.

Knowles said self-care is her life mantra and encouraged others to take a little time out: “We need to listen to our bodies and practise self-care. It’s so important to eliminate processed foods.”

But she admits that treating yourself on occasion is equally as important.