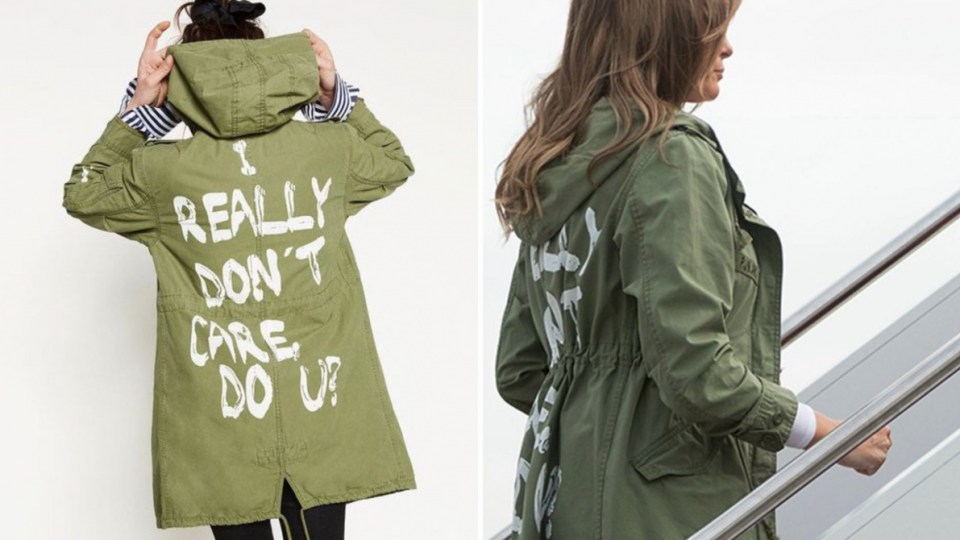 It’s a piece of nasty, nihilistic nonsense, teenage-angst graffiti splashed across the back of a $39 Zara canvas parka.

Except that this parka, with these sentiments, was worn by FLOTUS Melania Trump en route on her “unannounced” visit to detention camps in Texas that are housing reportedly traumatised, unaccompanied children – an appalling human rights issue gripping the world.

It’s a baffling choice of outfit, unspeakably callous and offensive. Her spokesperson Stephanie Grisham said there was no hidden sub-text behind the choice and then patronisingly instructed us all to focus on the bigger issues.

“If media would spend their time and energy on her actions and efforts to help kids – rather than speculate on her wardrobe – we could get so much accomplished on behalf of children #SheCares #ItsJustAJacket,” she tweeted.

Is that so, Steph? Because shortly afterwards, while we were being gaslighted and told to focus on the bigger issues, her lumbering, vicious fool of a husband tweeted: “‘I really don’t care, Do U?’ written on the back of Melania’s jacket refers to the Fake News Media. Melania has learned how dishonest they are and she no longer cares!”

“I REALLY DON’T CARE, DO U?” written on the back of Melania’s jacket, refers to the Fake News Media. Melania has learned how dishonest they are, and she truly no longer cares!

Okay. So it was intended to send a message then. I’m genuinely confused.

There are a few possible scenarios here. Let’s say she didn’t look at the back of the jacket and just grabbed it as she picked up her aviator sunglasses and walked out the door.

Very unlikely. She is extremely careful about her fashion choices and the persona she projects. It’s actually all she does, because her anti-bullying, Be Best rubbish is just robotic hot air when you are married to someone like supreme Bully In Chief Trump.

Another position would be that, despite her dubious Einstein Visa, her reportedly off-the-charts IQ and her fluency in several languages, she can’t read English.

Maybe it looked like a bit of meaningless Hello Kitty-style gibberish to her and she thought “cute, I’ll wear that”. But the fact that she chose to put it back on when she returned to Washington, in temperatures in the high 20s degrees Celsius says that she knew what she was doing.

So, let’s get literal. She, as the First Lady, chose this unbelievably tone-deaf parka on her way to visit to detained, parentless children. The message was clear. She doesn’t care.

Or was it in fact a message to her husband? Did he send Melania out on a mission to get good press about how caring and dedicated she is (and by association Trump), and she decided to give him a very public middle finger.

How will we ever know? This family is twisting truths and norms on an hourly basis. I still can’t believe that any woman would choose to wear that parka, especially in those circumstances.

I think she is so unhappy, so publicly shamed and unloved that she really doesn’t care. About anything at all.