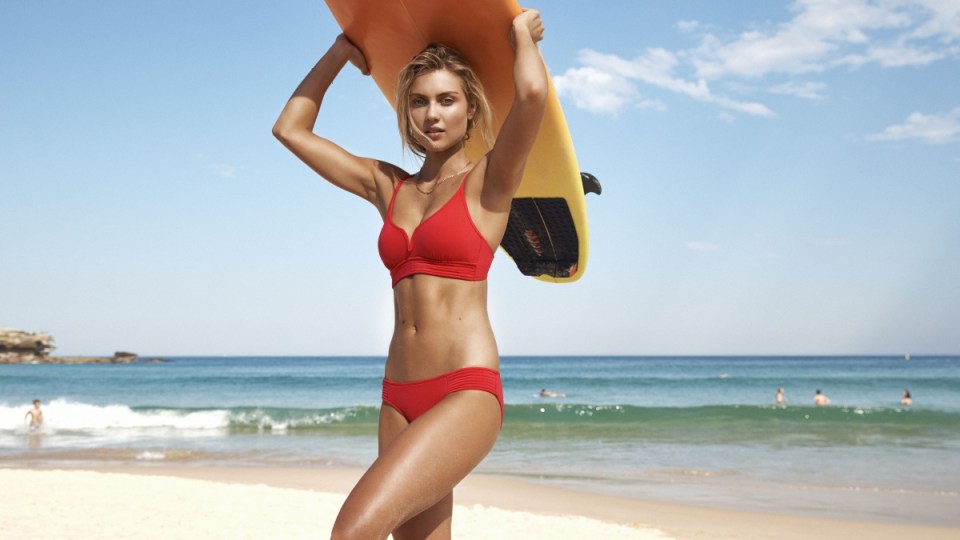 Elyse Knowles worked out seven days a week, sometimes twice a day, to prepare for her Seafolly shoot on Bondi Beach. Photo: Seafolly

Few things guarantee a model’s success in the industry like becoming the face of Seafolly.

Big names like Miranda Kerr, Gigi Hadid and Jessica Hart have graced the pages of the Australian swimwear brand’s lookbook and gone on to pose for Sports Illustrated or walk for Victoria’s Secret.

The gravity of the opportunity is not lost on Knowles, who hit the gym seven days a week, sometimes twice a day, to prepare for the Bondi Beach shoot.

“When I was working out I would say the word ‘Seafolly’ in my head,” Knowles tells The New Daily.

“I had to have the confidence to be on Bondi Beach with a million people looking at me. At the end of it I was losing energy so had to slow down a bit.”

It’s yet another win for the busy model, who recently joined Myer as a beauty ambassador, has a regular hosting gig on Channel Nine’s Postcards, and has fronted campaigns for major brands like Bras N Things and Billabong.

Despite possessing the kind of good looks that can often intimidate or alienate, Knowles is a warm, friendly presence with a thick Australian accent, who drops the occasional swear word and is fond of a skateboarding or waterskiing session.

In fact, her seemingly untainted positivity and wide-eyed enthusiasm belie the fact she’s actually been modelling since age 10.

“I went to Hong Kong and China when I was 15 years old,” Knowles says.

“I’ve lived in the model apartments with 10 other boys and girls and I’ve experienced it, I’ve worked hard, I got through that stage and I want to work harder so I can go over and do the job and come home to the place I want to be.”

The place she wants to be is on the couch with Barker, her boyfriend of four years, and their dog Isla at the bayside home they share.

It’s the couple’s second home – they only recently sold their first house, a rundown property in Coburg, in Melbourne’s inner north, for $1.63 million, shortly after taking home $547,000 in winnings on The Block.

Knowles and Barker, a carpenter by trade, bought the Coburg fixer-upper four years ago and transformed it from the ground up.

“It was a big gamble. We just wanted to get as close to the city as we could, so we bought a dump in a really nice street that we could renovate,” Knowles recalls.

While the model may joke that she’s got bogan traits – “Josh and I are just true Aussie surfie people having some fun” – she clearly has property smarts and the grit to survive multiple renovations.

“I’m capable of living in homes that are falling apart,” she admits, laughing.

“I can make a crappy house look alright and feel like home. At one stage we were getting the [Coburg] house re-stumped and I was walking over beams with a towel around me trying to get to the shower.

“Our kitchen was outside, we showered outside. It was fun! It makes you appreciate where you live now.”

But Knowles has her sights set on more than just local dominance, citing the internationally recognised Victoria’s Secret models as her professional idols.

Although she’s keen to do more work overseas, “Australia is my home. I love it here. My family, Josh and Isla, are here and it’s where I feel most comfortable”, she says.

In the short-term, Knowles is excited about her next project: renovating their latest property purchase.

“We’re just waiting for plans and permits to get approved and that can take a while – it’s the no-so-fun part.”

And, of course, she’s looking forward to treating herself after all that hard work in the lead-up to the Seafolly shoot.

“Straight after that shoot I rewarded myself,” she says.

“I went and got a bag of my favourite macadamia white chocolate, jumped in the car and went to the airport.”

When TND talks to Knowles days before the big Seafolly reveal, she’s bursting with nervous energy for her family and friends to finally see the product of months of hard work.

One person she’s not expecting a big reaction from, however, is Barker.

“I don’t know if he totally gets it. I like that. He’s out of my industry, so it’s nice to come home to somebody who is real and keeps you grounded.”