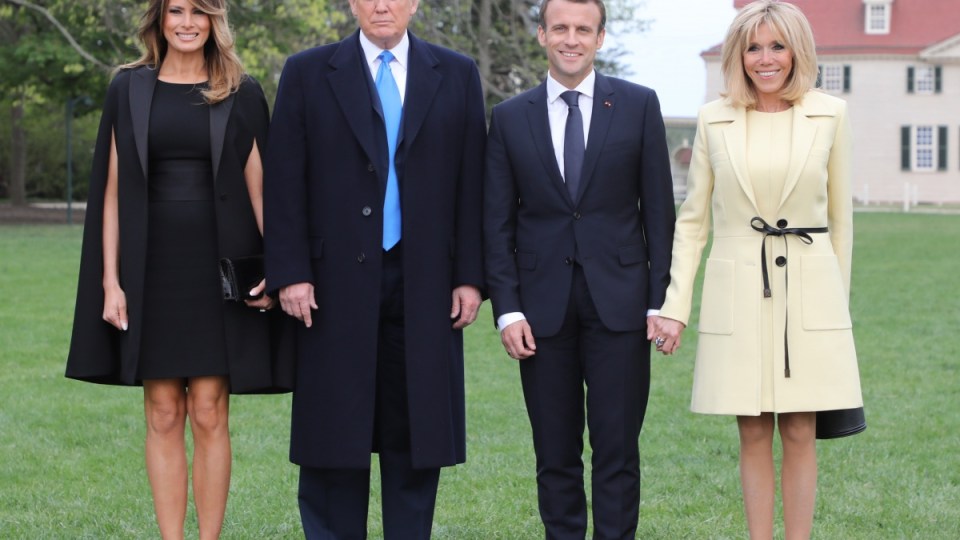 It’s rare that anyone is able to outshine Melania Trump on the fashion front, but France’s First Lady Brigitte Macron has arrived in the United States ready to give it her best shot.

Mrs Macron and her husband, French President Emmanuel Macron, are in the US for a three-day state visit following Donald and Melania Trump’s visit to France in July last year.

In a custom yellow coat and shift dress from French luxury label Louis Vuitton, the 65-year-old Mrs Macron provided a stark contrast to the US First Lady during a visit to the estate of former US president George Washington.

For the Tuesday (Monday local time) outing, Mrs Trump, 47, opted for an all-black ensemble – somewhat unusual for the daytime occasion –consisting of a $6400 Givenchy tuxedo cape worn over a Dolce & Gabbana dress.

Both women were forced to traverse the expansive lawn of the Mount Vernon, Virginia, property in black stiletto heels – Mrs Trump in Christian Louboutin shoes and Mrs Macron in Louis Vuitton, both of which had heels over 10 centimetres high.

Earlier that day when touching down in the US at Joint Base Andrews in Maryland, Mrs Macron made an entrance in a hot pink, double-breasted coat, again from Louis Vuitton, with a white button-down and a slim-line black pant.

According to US Vogue, Mrs Macron was borrowing Mrs Trump’s trick of paying homage to another American first lady.

It was a departure for Mrs Macron, who usually opts for more androgynous silhouettes and favours pants over skirts, with her wardrobe staples being skinny jeans, double-breasted blazers, shift dresses and all-black accessories.

Pink is her statement colour of choice and Louis Vuitton her go-to designer, thanks to her close friendship with the label’s current creative director, Nicolas Ghesquière.

In fact, Mrs Macron wears almost exclusively French designers – “Why not, if it does some good for the French fashion industry?” she told Elle France – particularly favouring Balmain, Alexandre Vauthier and Azzedine Alaïa.

As for her ideal skirt-length: “I wear above-the-knee, not minis,” she told Elle France.

Mrs Trump, on the other hand, is a fan of full skirts that fall below the knee and tightly cinched belted coats and jackets to highlight her waist.

Mrs Trump upped the stakes on the second day of the visit.

While both she and Mrs Macron wore white to a traditional “review of the troops”, the first lady attracted the most attention for her wide-brimmed white hat by French-American designer Hervé Pierre, topping a crisp white $2888 Michael Kors Collection belted asymmetric crepe blazer and skirt suit.

The real style showdown took place on Wednesday (Tuesday local time), with the state dinner at the White House, the first the Trumps have hosted.

As a tribute to her guests, Mrs Trump wore a silver spangled Chanel gown with a sheer hemline, while Mrs Macron once again opted for Louis Vuitton – this time a long-sleeved ivory gown with gold embellishment.

The dress code for state dinners is typically black tie, with the last US one held in October 2016 when Barack Obama was president and attended by now-former prime minister of Italy Matteo Renzi and his wife, Agnese Landini.

Former US first lady Michelle Obama made headlines with her choice of gown: a glittering, form-fitting rose-gold dress from Italian label Versace.

On Tuesday Mrs Trump shared a video of herself prepping the White House’s state dining room for the event, which she said has taken “months of preparation”.

Mrs Trump has “taken an active role in every detail in planning of the visit”, White House Press Secretary Sarah Huckabee Sanders said on Monday.

That includes details like a three-course French-American meal, a wine list with both French and American offerings, more than 1200 branches of American cherry blossom for decoration and a performance by the Washington National Opera from the John F Kennedy Centre for Performing Arts, according to Politico.

After months of preparations, President @realdonaldtrump and I are looking forward to hosting our first State Dinner with France! Thank you to everyone who has worked so hard to make this visit a success. 🇺🇸 🇫🇷

Brigitte Macron gives Melania Trump a run for her money