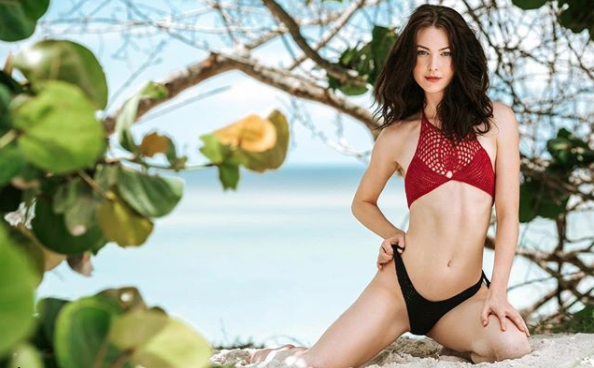 "You can’t just take a random bikini top from last year and wear it with a new, completely different bikini brief." Oh yes you can. Photo: Instagram

One of my very favourite summer pastimes is to do a spot of people watching at the beach, especially to check out the swimwear component.

Even though there are now swimsuits available for every shape and taste, there are still trends that clearly emerge.

Last year it was the little black French bikini, a style that features a simple bra top with straps over the shoulders and skimpy briefs. A couple of seasons before it was the multi-coloured bikini with contrast blanket stitching around the edge, a sort of expensive Brazilian hippy take on the two piece.

The high-cut, one-piece, string-cut maillot three sizes too small also made a brief appearance after influencers such as Kylie Jenner and Hailey Baldwin gave them some air time on Instagram, but thankfully they don’t seem to have become a thing for anyone who prefers to walk, sit down or swim.

It boggles the mind. It’s like that freaky “Por que no los dos?’ time back in the ’90s when somebody intelligent, somewhere, said: “Why do women’s two-piece swimsuits come in one standard size? Most women are a different size on the top than they are on the bottom, so why aren’t they sold separately?” Game-changer.

Now, not only do they not have to be the same size, they don’t have to even match. I’m struggling with the concept slightly, because my mother taught me that underwear must match, or at least be in the same colour.

None of this different-bra-and-undies thing for me – can’t do it. I suspect this mismatched cossie thing might be a little more tricky than it looks, because I feel like the pieces are specifically designed to go together, even though they may appear as if just casually thrown together.

You can’t just take a random bikini top from last year and wear it with a new, completely different bikini brief. That would be anarchy, because the last thing fashion needs is cost-effectiveness or logic.

It’s the same with the Turkish towel. Since the beginning of time, Aussies have dragged traditional towels to the beach, which turn to concrete once they are wet through and coated in sand.

Now the linen/cotton Turkish towel is dominating, a miracle accessory that dries in an instant and doubles up as a lightweight wrap (which can also keep the sun off your shoulders or fend off a cold breeze).

The idea of choosing and wearing swimwear as mismatched separates is just as liberating. It pains me to think of the times I said, “No, I cant go in, I didn’t bring my swimming costume”, when no one really could have cared less.

One person’s Calvin Klein bra and pants is really just another person’s cossie. Maybe that will be in next season.