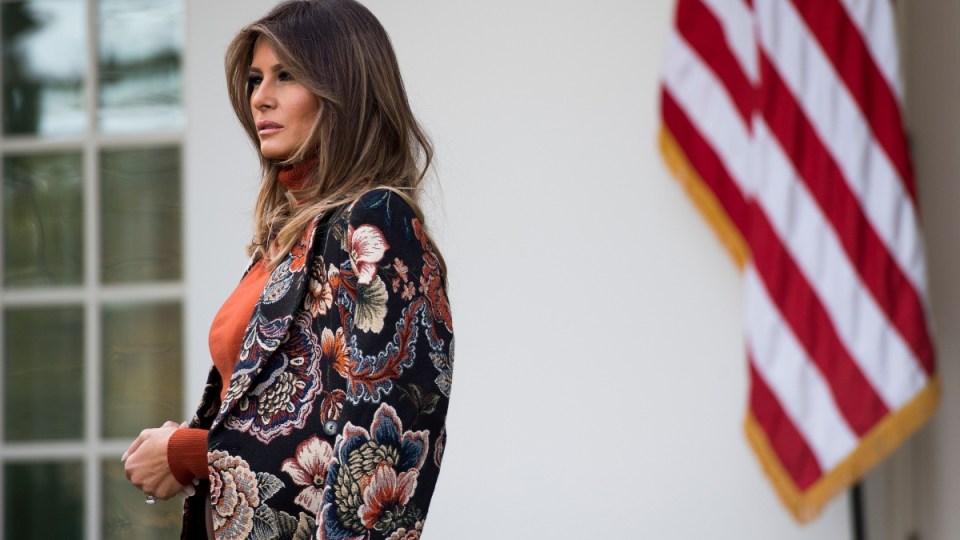 Donald Trump may support the right to bear arms, but his wife Melania just as strongly refuses to bare her own.

In the past, the former model did her share of shilling for lingerie brands, but since her husband’s elevation to the White House she’s developed a modest approach to dressing with long hemlines, high necklines – and one weirdly recurring style signature.

Melania, 47, is a huge fan of luxe coats in plaid, camel and pastel, which she pairs back with dresses, turtlenecks and pants.

But she never actually wears the coats.

Rather, she ‘coat slings’. She positions them just off her shoulders a la Anna Wintour, in a look which has been called ‘nonchalant coat’.

To take delivery of the official Christmas tree outside the White House on November 20, Mrs Trump sported a festive red knit, tight trousers, knee-length boots and a red-and-blue peacoat hanging off her shoulders.

She kept the coat not quite on when she headed inside to check out the traditional White House gingerbread house, escorted by the pastry chefs who made it.

Charged with hanging a little icing wreath on the house, she gingerly extended an arm so as not to unsettle her coat.

To reflect the gravity of her next duty, decorating the six-metre balsam fir with ornaments, Mrs Trump changed into a pale-pink formal coat and matching cap-sleeved dress.

As Harper’s Bazaar put it: “Inexplicably she wore two different forms of outerwear inside.”

The fashion magazine added that Melania’s ‘shrobing’ was “perhaps the most unconventional aspect” of the tree-decorating ceremony.

“As any fashion editor or influencer will tell you, movement is limited when it comes to this styling note and one would imagine that it would be a challenge to decorate a Christmas tree while wearing your coat as a cape,” it said.

Mrs Trump was unbowed, returning to the same well on November 21. As her husband performed the traditional pardoning of the turkey, she hit up the Rose Garden in a high-waist, leather skirt, red top and draped print coat.

The trend is an “irritating affectation that has sprung up and will not seem to die”, according to The New Daily fashion writer Kirstie Clements.

It is designed to say, “I’m somebody”, says Clements, who drilled down into Vogue editor-in-chief Wintour’s motivations for breaking it out at fashion shows.

“Anna did it for a number of reasons, mostly because she never carries a handbag: she has a driver and a bodyguard, so the use of her arms to open doors has always been optional.”

So Mrs Trump may be using the half-worn coat as a visual cue to her Twitter followers: the chic power of the look is that it announces to the world that she’s above being practically useful.

It worked on right-wing website Breitbart, which reported the coat-slinging gives her the means “to subtly and stylishly declare her significance in the White House”.

“The draping over of her coats keeps her in a poised, statuesque stance that exudes regality.”

Mrs Trump has been pulling the move for a couple of years now – she did it with a sugar-pink, shawl-collared coat at a Republican presidential debate in October 2015.

Arriving for a lunch with the spouses of other G7 leaders at the Elephants Palace in Sicily in May, she jazzed up a simple shift dress with a $67,000 Dolce & Gabbana floral appliqué jacket, worn ‘shrobe’ style.

Two months later, in Germany for the G20 summit, she draped a mango Bottega Veneta cashmere coat over a grey and white Hervé Pierre dress.

In October, inside the Smithsonian National Museum of History, she kept her arms out of her pink coat while donating the gown she wore to the 2017 inaugural balls.

To tackle the Great Wall of China in November, the First Lady went for nude flats and a fitted skirt with the ubiquitous half-on coat.