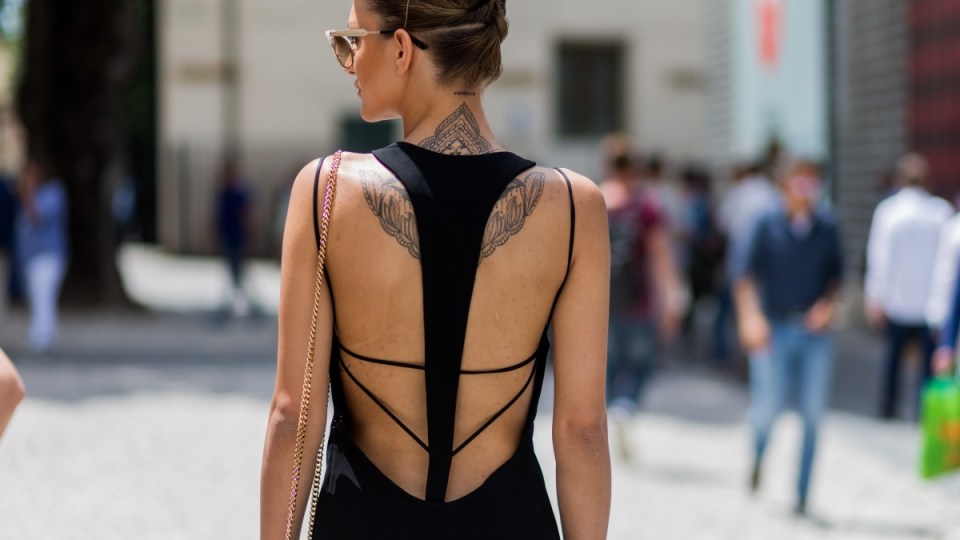 Is there ever such a thing as stylish skin ink? Photo: Getty

At a lunch last week I noticed a woman with one of the loveliest tattoos I’ve ever seen. She had jet-black hair, blue eyes, pale skin and red lipstick, and was wearing a white shirt with the sleeves rolled up.

Snaking around her wrist was tattoo that resembled a large, intricate cuff, swirling black lines resembling delicate filigree work that was both dramatic and romantic.

For the first time in my life I seriously considered getting a tattoo. The idea of creating a beautiful piece of permanent jewellery is very appealing.

The ancient art of tattoo is of immense importance to many cultures: The ta moko markings of the Maori in New Zealand, the intricate artistry of the Japanese, and the traditional practices in regions from Borneo to Bali.

Take a trip to any beach in Australia and it is obvious that the popularity of tattoos continues to grow, for men and women. A young man I know, a friend of my son, travelled to Bali last year and came back with a tattoo, even though his mum had asked him not to.

“She’s furious,” he admitted to me.

Given that he had the sheet music from the Miami Vice theme song tattooed already down his leg, I couldn’t imagine what he’d done now. I asked him to show me, and he revealed a tattoo of a bird in flight that covered his entire back and shoulders. It was absolutely breathtaking.

Mum’s displeasure aside, he had managed, by pure dumb luck, to be tattooed by an incredibly skilled artist. I’ve always loved tattoos, and the message they send about the wearer and his or her tribe – the leather-clad bikers, the glamorous Rosie The Riveter girls with their pink hair and red lips, the Goths.

Where once I thought that tattoos on the neck and face were perhaps a step too far (job-stoppers as they were called), I’ve changed my position on that.

In London, I was staying at an uber-hip hotel where the staff were way cooler than the guests, and I noticed more than a few good-looking young men and women with beautiful, floral tattoos stretching down their hands and onto their fingers, or designs that climbed up the neck, crossing just over the jaw.

In a climate where you are going to be covered up in coats most of the time, tattoos that trail like that can look quite seductive.

The new mode of designing and tattooing a collection of symbols over time that have great personal meaning is rather romantic, as if the wearer were a living notebook.

As with anything, there will be wide and varied interpretations of this, from misspelt quotations or hilariously bad depictions of famous pop stars – after one too many drinks – to the most amazing, intricate works of art.

Beauty may be in the eye of the beholder, but a tattoo is in a different realm – intensely personal and meaningful to the wearer.

Attractive, appealing and seductive: How I’ve learned to love tattoos