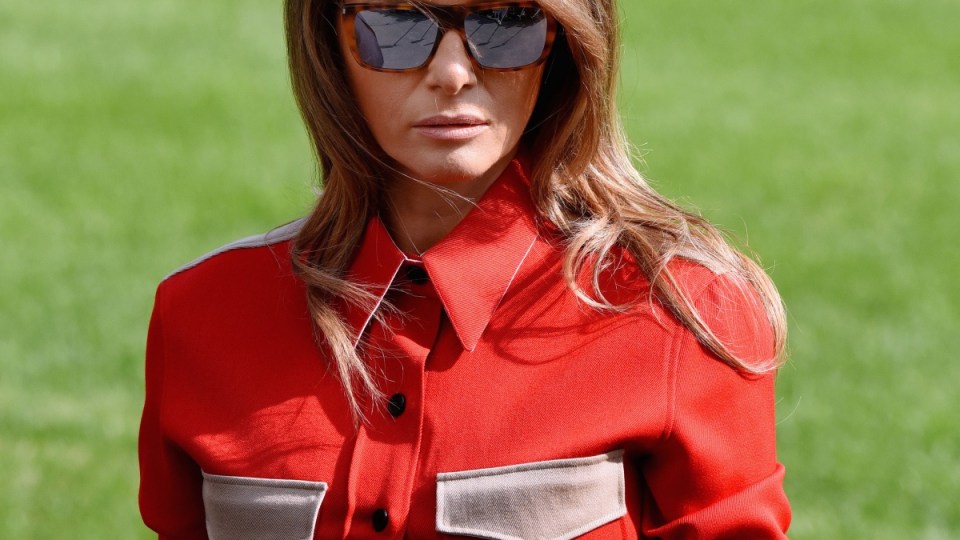 It’s a fact that women in politics, whether they are the politician or the spouse, attract far more attention for their fashion choices than men do.

Wearing a gender neutral pantsuit seems to be an obvious fallback, favoured by power players such as Hillary Clinton, Angela Merkel, Julia Gillard and Senator Penny Wong – just put on the jacket and trousers and get on with it.

If they try to accessorise, i.e. Theresa May’s recent choice of a distinctive if somewhat kooky Frida Kahlo bracelet, they are mocked.

Even the cut of Julia Gillard inoffensive jackets was the subject of a lacerating insult: “You’ve got a big arse Julia, get over it,” from noted feminist Germaine Greer, of all people.

First ladies are constantly judged, rated and criticised, so when Melania Trump catwalked into the White House, she no doubt felt the pressure.

Her predecessor, Michelle Obama, had become (once America got over the shock of her choosing sleeveless dress for her official portrait) somewhat of a fashion icon, with her pretty shift dresses, flats and tailored coats.

But I have to hand it to Melania; she knocks it out of the park when it comes to appropriateness.

Her evening gowns are stunning without being overly sexy or embellished, and she looks fabulous in a pantsuit, wearing them gently nipped in or belted at the waist.

The last month has seen her face the PR nightmare of dressing appropriately for several disaster zones, from Hurricane Harvey in Texas, to Hurricane Irma in Florida, to Hurricane Maria in Puerto Rico.

For these occasions, she tends to favour a crisp, vaguely military look – blazers and jeans, navy caban coats and khaki shirtdresses put back with a snakeskin heel.

She loves a sky-high, pin-thin, stiletto-heeled Louboutin, appearing to own them in every colour and pattern. She must get through an awful lot of them.

I wince every time I watch her walking across the White House lawn on her way to board the presidential chopper, the heels sinking into the grass like golf tees.

She was widely criticised for wearing heels on her way to visit flood victims, but to be fair; she swapped them out mid-flight and donned sneakers or Timberland boots – a nice contrast against her dazzling white Action Barbie jeans.

She adds just the right accessory for every occasion – the black lace mantilla in the Vatican, the jazzy wide gold belt in Saudi Arabia, the $800 plaid shirt in the White House vegetable garden, the Dolce & Gabbana florals in Italy.

Her performance can’t be faulted because that’s precisely what it comes across as. A performance.

I thought Robin Wright was killing it with her gorgeous and appropriate presidential wardrobe on House of Cards, but First Lady Trump is giving her a run for her money.

While her odious husband tosses paper towels to hurricane victims as if they are performing seals, Melania looks casually perfect and camera ready in her aviator sunglasses and khaki bomber jacket.

A Stepford wife of the first order, she tonelessly reads teleprompter speeches about doing unto others and the importance of preventing cyber bullying while she supports and promotes one of the most vindictive, callous and powerful bullies on the planet, looking pretty in pink.

Fashion is artifice, and Melania is a pro. 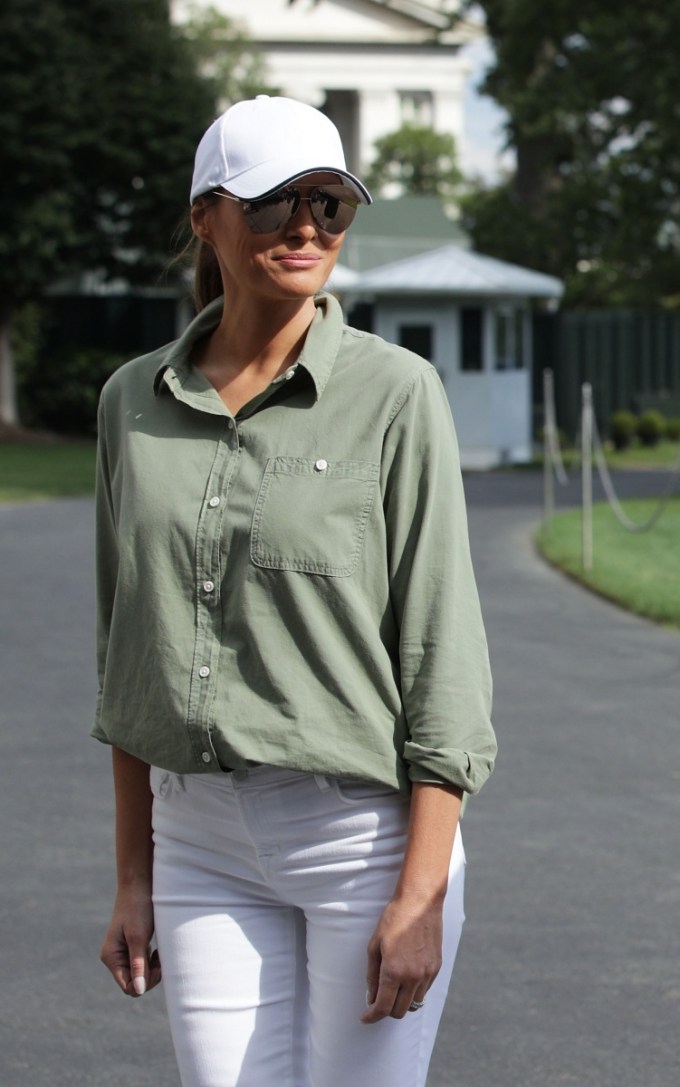 Returning from a trip to Florida to visit those affected by Hurricane Irma, Mrs Trump chose a casual khaki shirt. Photo: Getty 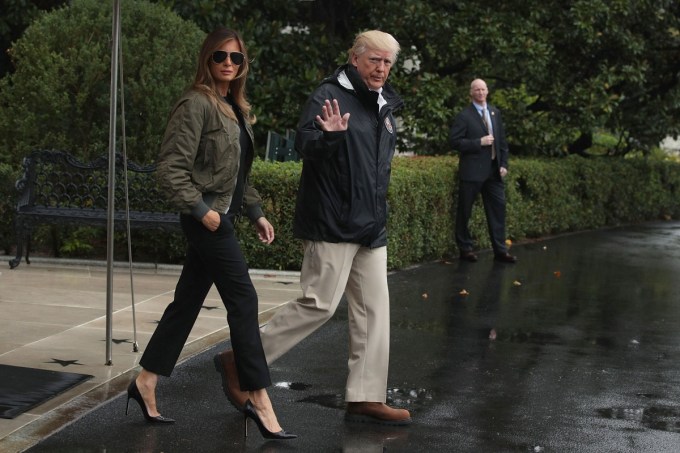 Melania Trump, on her way to Texas to help with Hurricane Harvey relief, swaps her high heels for sneakers on Air Force One. Photo: Getty 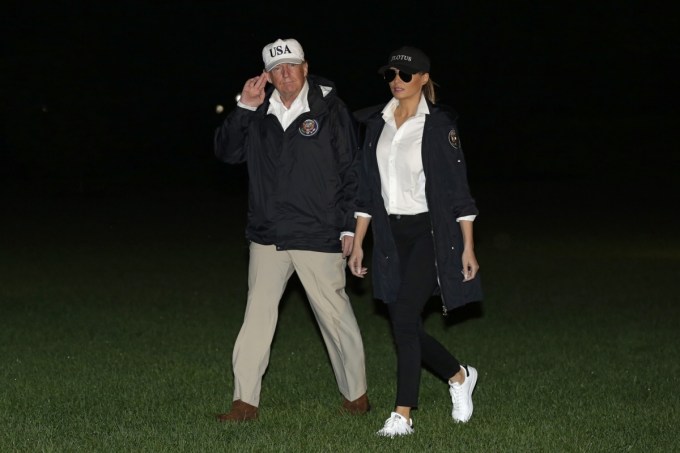 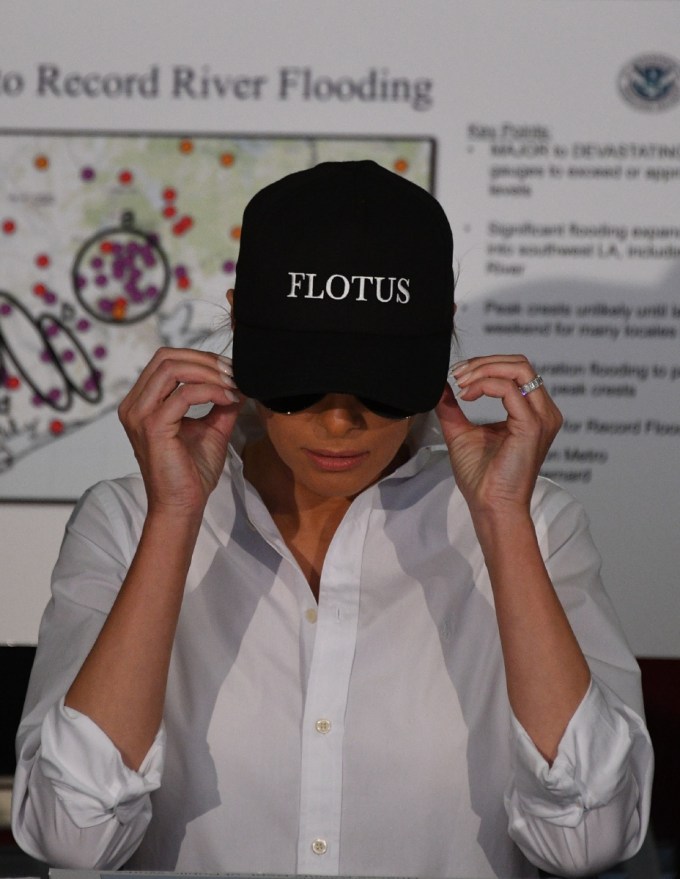 The First Lady wears her title on her hat for a hurricane briefing in Texas. Photo: Getty 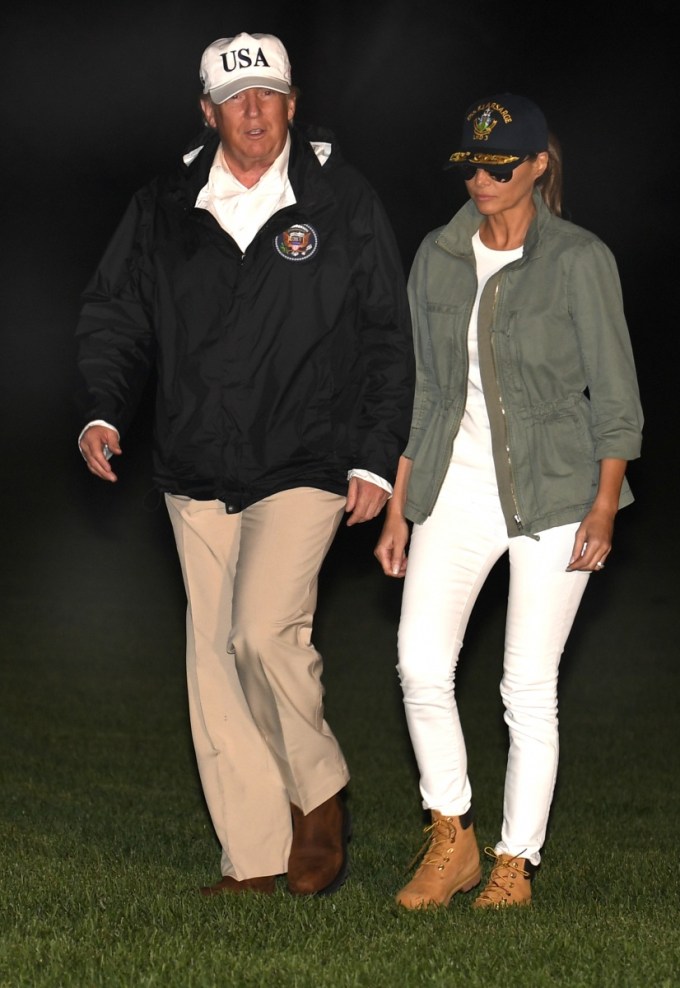 Her trip to Puerto Rico for Hurricane Maria was spent in not-so-practical all white, but she at least traded the heels for combat boots. Photo: AAP 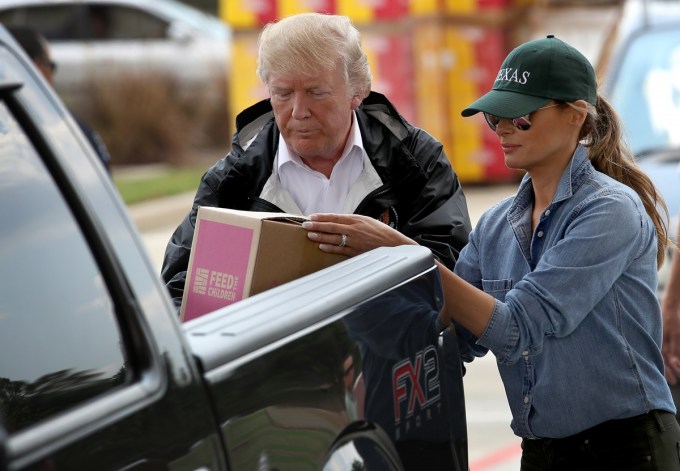 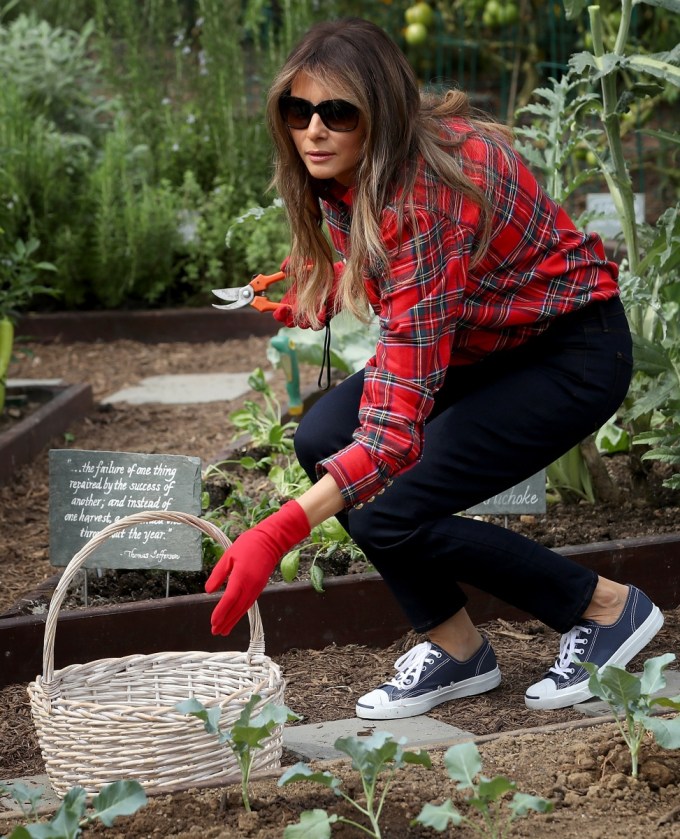 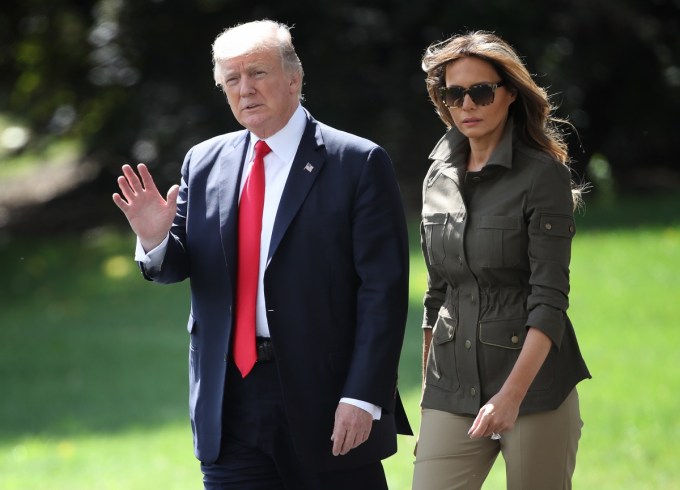 Melania wore a military-style jacket for her visit to an Air Force base in Maryland – with heels, of course. Photo: Getty 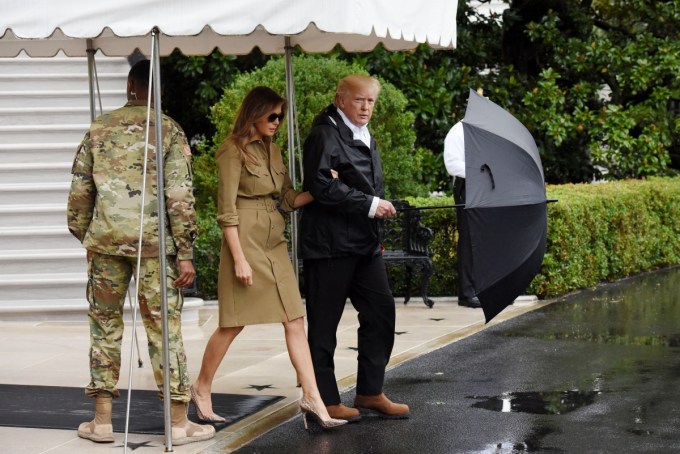 Even wet weather - and Hurricane Harvey flooding - couldn't deter the First Lady from choosing a dress and heels for a trip to disaster-stricken Texas in September. Photo: Getty 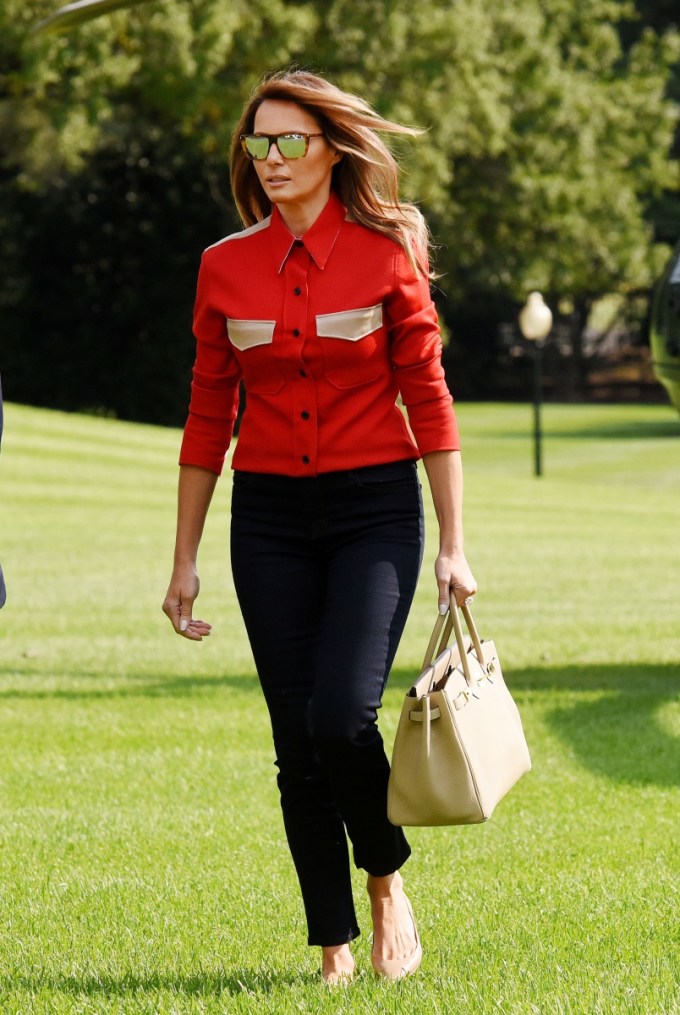 Melania's attire for a weekend at Camp David, the presidential retreat, was accented by massive aviator sunglasses and an exorbitantly priced Hermes Birkin bag. Photo: Getty