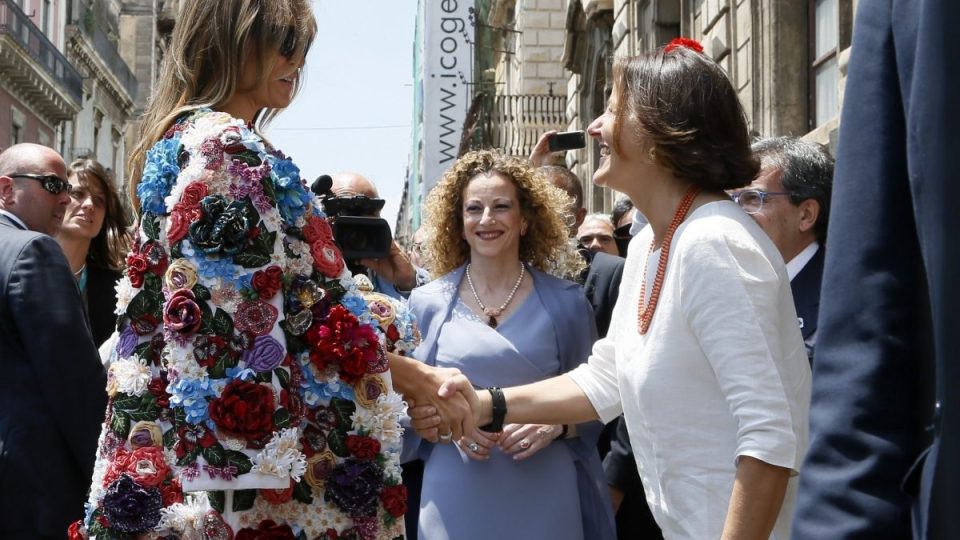 First Lady Melania Trump is suffering a fashion backlash over a luxury jacket worth A$68,400 she wore to an appearance in Italy.

The lavish, floral coat cost more than the average Australian worker earns in a year – about A$60,600 before tax.

Ms Trump attended a lunch with spouses of the G7 leaders in Sicily adorned in a colourful coat, designed by luxury Italian fashion brand Dolce & Gabbana.

The bold garment made a statement following worldwide appearances in shades of black and white throughout the remainder of her and President Donald Trump’s first overseas tour.

The dress alone requires a US$25,100 deposit and is not available until July, USA Today reported.

While many fashionistas admired the artistic piece, the exorbitant price rankled others.

One US citizen wrote in response to a White House social media post: “It’s poor taste to wear a $51K jacket when a good percentage of Trump supporters make that amount or less as an annual income.”

Ms Trump is not the first First Lady to cop criticism for her expensive taste.

Michelle Obama was similarly slammed for wearing blue and black designer dress to the White House state dinner in 2014.

Reports at the time estimated the dress cost about US$12,000 which is more than the median annual household income worldwide — US$9,733. Notably, it was one-fifth of the price of Ms Trump’s jacket.

Ms Obama was also mocked for wearing designer sneakers costing more than US$500 in a visit to a food bank.

Meanwhile, in Australia, the wives of politicians face similar scrutiny over their style choice, regardless of how pricey it may be.

The Coalition appeared to think they had struck political gold when Ms Shorten removed the crystal-studded jewellery about 30 minutes into the speech, reportedly texting journalists about the wardrobe adjustment.

The assumption was swiftly made that it been an expensive piece, however it was later revealed that the piece had been purchased for just A$25.

While not everyone was impressed by Ms Trump’s decision to wear the overpriced jacket, fashion labels benefit greatly from the publicity of some of the world’s most prominent leaders’ wives endorsing their wares.

Several fashion designers have publicly refused to associate themselves with the First Lady in protest to her husband’s policies, a stance to which Dolce e Gabbana do not appear to have backed.

The brand continues to celebrate each of Ms Trump’s D&G appearances, proudly sharing photos of the First lady adorning their luxury garments.

D&G captioned the photo: “Thank You to FLOTUS #MelaniaTrump”.