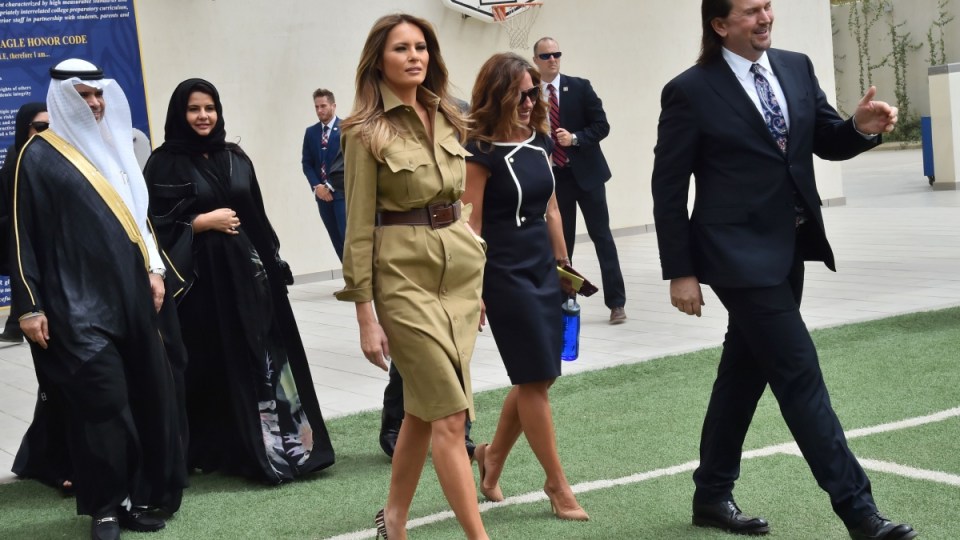 Emerging from Air Force One in Riyadh, Saudi Arabia, on May 20, US First Lady Melania Trump sparked a flurry of commentary.

What for? For not covering her hair in a religious state with harsh restrictions on women.

It was just the beginning of the former model’s successful crack at turning her husband’s first international trip into her personal couture catwalk.

Mrs Trump’s arrival outfit—a black jumpsuit—was respectful in length and colour to the ultra-conservative dress code of the Islamic nation.

It resembled an abaya, the traditional black gown required for most women.

The Stella McCartney jumpsuit “had disco-era details”, said Vogue, “including a wide-leg silhouette, keyhole cut-out at the bust, and cuffed sleeves.”

“If you look at her style, it’s still very much her and her style of dress, but being sensitive to the place and host nation,” she told CNN.

Still, the wrestling-style belt was a bit much, said Saudi television host Muna Abu Sulayman: “Somebody else might not have pulled it off.”

First Daughter Ivanka Trump—who held husband Jared Kushner’s hand as they left the plane— also made her own fashion statement, in a long-sleeved black and white floral midi dress.

As for the lack of head covering, former First Lady Laura Bush went without to meet the Saudi royal family, as did heads of state including German Chancellor Angela Merkel and British Prime Minister Theresa May.

Michelle Obama was bareheaded during a January 2015 visit, attracting criticism from Donald Trump, who tweeted it “insulted” Saudis, and “we have enuf [sic] enemies.”

Now, the Trump camp says its women didn’t wear headscarves because “nobody asked [them] to,” said Grisham.

Previous First Ladies and politicians have never turned up the luxe quotient in Saudi Arabia like fashion insider Melania, 47.

Merkel stepped out in a mumsy slack suit, Secretary of State Hillary Clinton (in a flowing tunic) went barefaced and scraped her hair back, and Michelle Obama played things down in black pants with a long blue and white jacket.

Melania signalled her intentions when she left the White House on Friday night.

No velour travel tracksuit for this First Lady of the United States: she sashayed off in an Herve Pierre tomato red leather skirt, a Max Mara cream knit, towering nude Manolo Blahniks and kick-ass diamond ring.

On the first day, she changed from the jumpsuit into a long magenta gown with flowing cape sleeves for a dinner at the Saudi Palace.

On May 21, visiting an all-women factory, she went for no-nonsense chic in a streamlined khaki knee-length shirt dress, but again added a high-end touch: animal print stilettos.

The First Lady worked with State Department protocol and received briefings on her wardrobe before the foreign trip, said Grisham, who told CNN she’s been “studying hard.”

Ivanka and Melania’s outfits cause a stir in Saudi Arabia