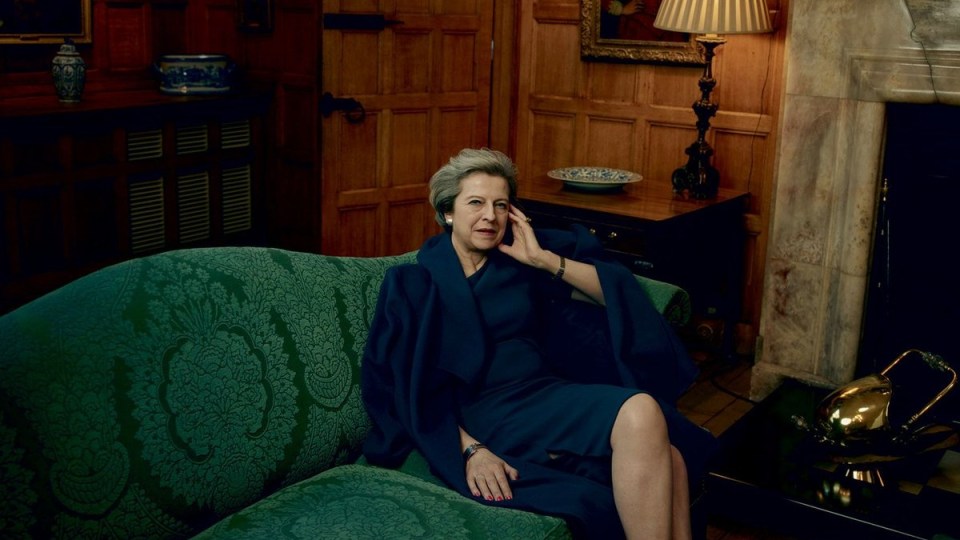 Theresa May is pictured in an interview with Vogue Photo: Vogue/Twitter

Theresa May is known for her fondness of fashion, and in her latest interview appears elegantly styled in an Anna Wintour-orchestrated shoot for US Vogue.

Despite attracting controversy when she appeared in a Sunday Times interview sporting a $A1,597 pair of leather trousers by designer Amanda Wakefield last November, the Prime Minister told Vogue she accepted the scrutiny but it would not stop her from “enjoying fashion”.

The Vogue shoot, released as the Prime Minister announced the official date for the triggering of Article 50 for formal EU withdrawal talks, appears to have been styled with an eye to the British heritage of the brands.

In the spread, shot by famed portrait photographer Annie Liebovitz, the Tory leader was styled in a royal-blue co-ordinated outfit by LK Bennett, a brand favoured by the Duchess of Cambridge.

Where does @theresa_may stand? We sat down with her to find out. https://t.co/k4W24LJ39r pic.twitter.com/CziqpROaNu

A spokesman for the brand told the Press Association that Mrs May wore a $A407 Saskia dress, paired with a $A719 wool coat draped over her shoulders.

In a second shot, the MP for Maidenhead is pictured with her husband Philip May in an autumnal field.

Both pieces were designed in the UK and and the jumper was manufactured locally, a spokesman for Egg told the Press Association.

The LK Bennett spokesman did not comment on where the clothes were manufactured, but said both pieces were designed in a studio in Shoreditch, London.