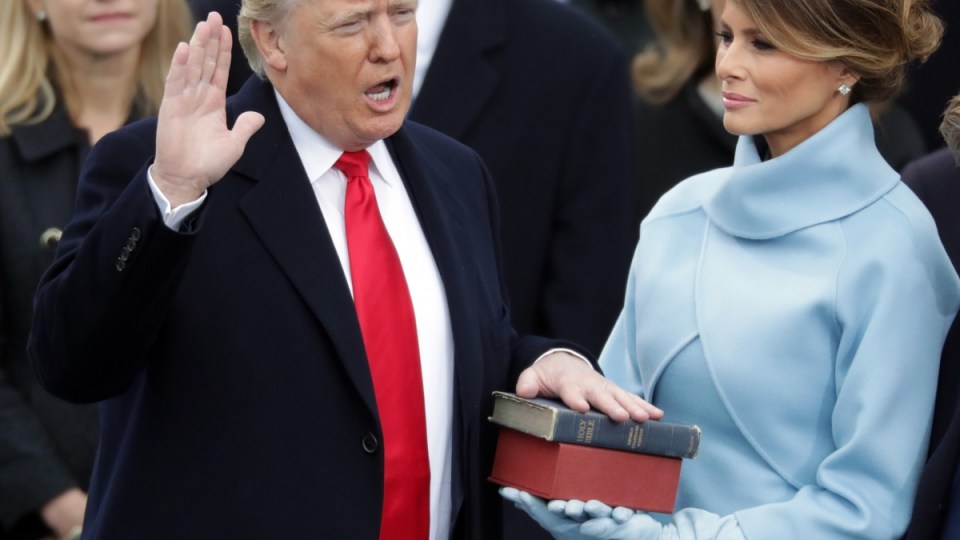 Melania Trump holds the Bible on the West Front of the US Capitol as her husband takes the oath of office. Photo: Chip Somodevilla/ Getty

She stepped out in a Ralph Lauren baby-blue jacket and matching dress on Friday – with comparisons made to another First Lady, Jackie Kennedy.

The woman many thought would be taking the oath instead, Democrat Hillary Clinton, also chose Ralph Lauren, and her cream coat and white pantsuit was echoed by the choices of the Trump daughters.

Ivanka Trump, who has her own fashion line, donned a white pantsuit with an asymmetrical cut that was designed by Oscar de la Renta.

But the outfit getting most attention on Friday was the red hat with white and blue military style coat worn by Trump’s former campaign spokeswoman Kellyanne Conway.

The short, double-breasted Gucci coat had a revolutionary-era look that took social media by storm, evoking comparisons ranging from Paddington Bear to Napoleon and a nutcracker.

"Sometimes, a fashion choice tells you everything you need to know." —@RobinGivhan https://t.co/jsdJ1h5k8x

By contrast, Melania Trump’s custom-designed Ralph Lauren outfit, worn with long matching gloves, stiletto shoes, and her long hair swept up in a loose bun, had a 1960s vibe and wowed fashionistas.

Style-watchers agreed, posting archive photos of Kennedy in a similar blue outfit for her husband’s inauguration in 1961, and giving Trump’s outfit a large thumbs-up.

“It was very Jackie,” said Joe Zee, editor in chief of Yahoo Style.

“Melania looks every inch a first lady. So beautiful and classy! I’m proud of her!,” admirer Theodora West wrote on Twitter.

Melania Trump’s Inauguration Day outfit had been the cause of much speculation after Tom Ford, Marc Jacobs and other leading designers said publicly they would not dress the former model for her big day because they opposed her husband.

“It was important to us to uphold and celebrate the tradition of creating iconic American style for this moment,” the Lauren corporation said in a statement.

Lauren and his eponymous corporation became synonymous with American style through his preppy line of Polo shirts, casual slacks and shorts in the 1970s and is regarded as one of the most influential designers of the 20th century.

Ironically, Lauren was also the designer of the pantsuits in many colours that became Clinton’s signature look.

Melania Trump, 46, is the first US first lady to come from the fashion world. She began as a teen model in her native Slovenia and has been featured on the cover of magazines like Vogue and GQ.