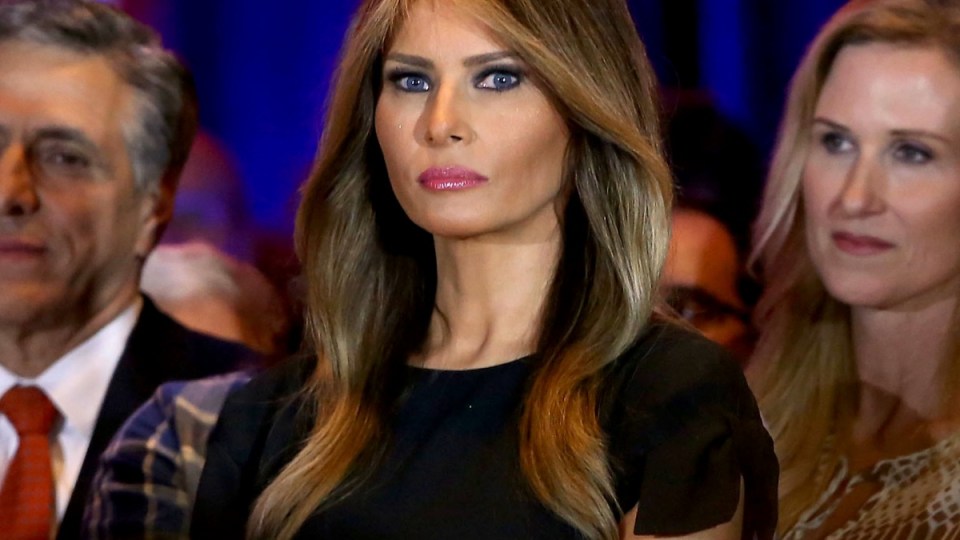 Melania Trump has plenty of cards hidden up her couture sleeve. Photo: Getty

After Melania Trump’s disastrous copycat speech at this week’s Republican National Convention, tongues were wagging about how well-equipped she was to be First Lady.

But one part of Melania’s appearance at the RNC spoke more loudly than her liberal quoting of Michelle Obama: her dress.

Within hours of her speech, Melania’s chic white sheath dress with balloon sleeves had sold out online.

Priced at $2952, the gown was a powerful choice for a First Lady hopeful – subtly sexy, unabashedly modern and a clear style statement.

The backstory of Melania’s dress was even more compelling. The gown was created by Roksanda Ilincic, a Serbian-born, London-based designer who emigrated from Belgrade in 1999.

Her brand, Roksanda, has had a swift rise to success since its fashion week debut in 2005 – Kate Middleton is a fan – and Melania’s recent outing undoubtedly added to the hype.

In the past, Melania has admitted to selecting her own campaign clothing, and her choice of this particular gown was clearly strategic. She reportedly even purchased it herself on Net-a-Porter, rather than going through the traditional avenue of a stylist.

A former model, Mrs Trump was born in Slovenia – like Serbia a former part of Yugoslavia – where she was raised by  her fashion designer mother, Amalija Knavs. Roksanda’s journey has an unspoken link to Melania’s own roots as immigrant.

The dress makes a statement arguably at odds with her husband’s closed-door approach to immigration. The fact Melania chose a non-American designer also deviates from First Lady tradition (Michelle Obama wore US designer Tracy Reese to the 2012 Democratic National Convention).

On a purely aesthetic level, the crisp gown also distinguished Melania from other First Ladies before her, all of whom have made their own statements – intentional or otherwise.

Jackie Onassis paved the way with her perfect skirt suits and pillbox hats, epitomising elegance both in that era and today.

Hillary Clinton’s beloved pantsuits suggested practicality and power – the same qualities that would later land her her own presidential campaign.

The inimitable Michelle Obama has consistently opted for fun, family friendly frocks stylish enough to win her Vogue covers but subtle enough to let her actions do the talking.

While Melania has taken a backseat during her husband’s campaign, her clothing has not. Self-assured and sexy, her get-ups suggest she knows what she’s doing, even if her speechwriter does not.

As The New York Times‘ style writer Vanessa Friedman pointed out, as a former model Melania is well versed in the power of appearance.

“Indeed, most of her [Melania’s] communication has been through appearance, rather than words,” Friedman wrote.

“I’d give her the benefit of the doubt on this one, and pay attention to what comes next.”

Whether that’s a pale blue cashmere coat draped casually over her shoulders or a structured pencil dress in cobalt, fashionistas will no doubt clamour to get their hands on it.

Melania Trump has a hidden weapon – her style