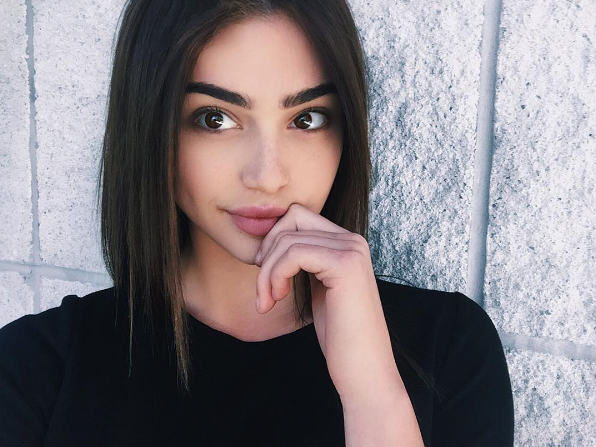 Just as you were celebrating the end of the ‘duck face’ pout, Instagram users have jumped on a new, more confusing pose.

‘Fingermouthing’, as it was dubbed by a recent Buzzfeed article, involves young women partially covering their mouth with their fingers.

More demure than the classic pout and subtler than the peace sign – it seems young celebrities such as model Bella Hadid and Pretty Little Liars actress Ashley Benson have found their new staple.

The trend has been traced back to two Instagram stars, one better known than the other.

Canadian model Kristen Hancher has been spruiking the pose regularly since February. But even with 1.6 million followers, it’s unlikely Hancher is completely responsible for fingermouthing going global.

‘I was so insecure’

A more likely culprit is reality star and self-confessed lip obsessor Kylie Jenner, the youngest member of the Kardashian mafia.

Jenner, who has admitted to using lip fillers, said she began ‘fingermouthing’ because she was self-conscious about her lips.

“I was so insecure about my lips … I would always cover [them],” she told Elle.

Poor Jenner said she “couldn’t even talk to people” because she was worried they would stare at her little lips.

It seems fingermouthing is a lasting legacy, however.

“Even now I always post photos where my finger is always in front of my mouth … it’s a habit,” Jenner said.

Bella Hadid, the up-and-coming supermodel sister of Gigi Hadid, is quite partial to a fingermouth.

Hadid has rocked the pose both in editorial shoots and on her own personal Instagram account, complete with five million followers.

Kendall Jenner (perhaps influenced by her older sister) and British singer Lily Allen have also given it a try.

Some astute commentators have pointed out that not all fingermouthers are young and beautiful women: Dr Evil from Austin Powers was fingermouthing before Kylie Jenner was born.

And then there’s … ‘fish gaping’

Who would have thought the Internet could come up with a worse term than ‘fingermouthing’.

‘Fish gaping’, as it’s been described by the likes of Marie Clare, is another duck face successor.

Achieved by slightly parting the lips so that a small amount of tooth is visible, the fish gape is credited with giving devotees a sexy, streamlined look.

“All it takes is some practice positioning your tongue against the back of your teeth/the roof of your mouth to get the proper slimming effect,” Marie Claire reported.

Who said taking a selfie was easy?