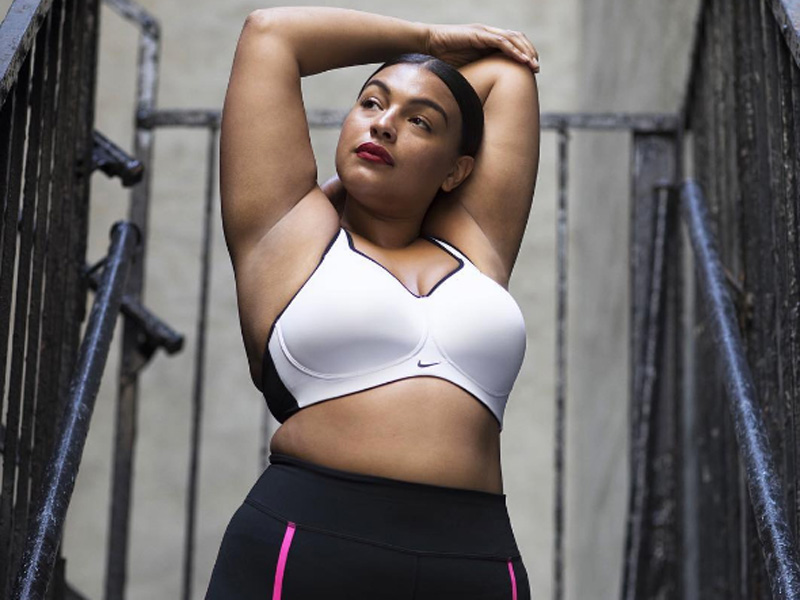 Global sportswear giant Nike is being praised for promoting one of its products by modelling it on a plus-sized woman, after years of apparently ignoring them.

Nike commissioned curvy model Paloma Elesser to show off one of its sports bras in an Instagram post on Friday (AEST), possibly in response to complaints that the company has long failed to make exercise clothing for women who wear bigger sizes.

Nike’s “@NikeWomen” Instagram account has 4.8 million followers and Elesser’s presence marked the first time a plus-size woman had featured in an ad on the profile, and possibly in Nike’s history.

Elesser appeared modelling one of Nike’s new sports bras. The post was accompanied with instructions about how to find a sports bra that fits well.

The New York-based model’s curves have been a welcome addition to an Instagram account and a company which has used almost exclusively slender human subjects.

Welcome to Sports Bra 101 🤓 ⠀ Fact (1 of 4): Most women wear a band too big and cup too small. Raise your hands above your head. If the band moves up, you may need to size down. Learn more through the link in our profile. ⠀ #nike #nikeprobra #sportsbra

Following the success of Elesser’s photo, Nike had another plus-sized model in a follow-up image:

Hold tight ✋ ⠀ Fact (3 of 4): Sports bras are designed to take on more impact than regular bras – this is why the band of your sports bras should fit slightly tighter than your everyday bra. Learn more through the link in our profile. ⠀ #nike #nikeprobra #sportsbra

Nike was praised by many for its move to featuring plus-sized models.

“Beautiful and powerful, a real goddess worthy of the Nike brand,” @jjenchanted wrote on Instagram.

Nike was also praised because the post did not mention the woman’s size.

Many women slammed Nike for not actually providing women with bigger sizes. A lot of them were disappointed that their cup sizes were not stocked by the sportswear brand.

“If only you offered a size higher than an E in all of your bras … then us curvy girls could actually show our support of your brand by going out and buying your product!” @mscoralmakenzi wrote.

Then @32ducks complained: “I heard you were only making bras to a size E … You need to make bigger bras!”.

According to @smpetrauskis, “DD is actually not that large”.

“It was discouraging to find that I was “‘outside the measurements for Nike’s current sizes'”.

Other brands to have used plus-sized models in the past included H&M, Aerie and well-known magazine Sports Illustrated.