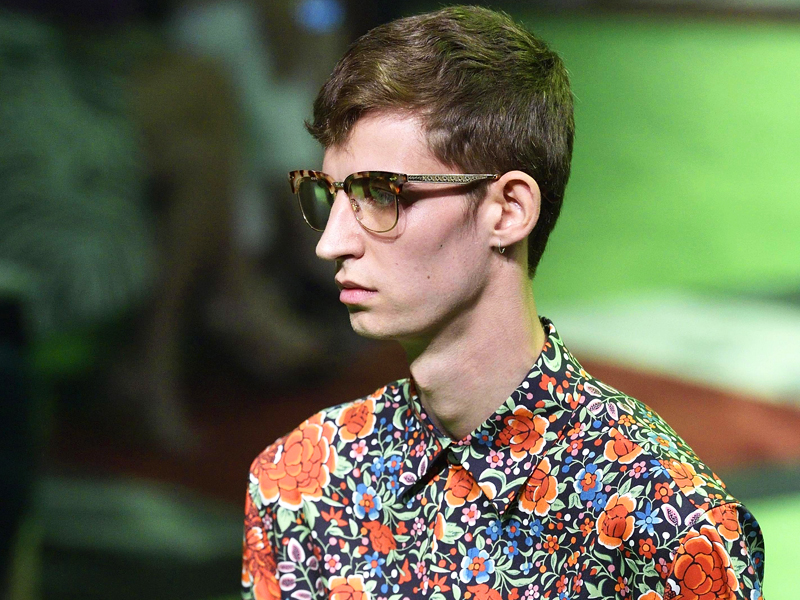 I was driving through the city recently and I noticed a very pretty young woman with beautiful, natural flame red hair standing at the traffic lights.

“She looks great,” I said to my 21-year-old son sitting in the car next to me.

She was wearing an oversized black parka, a hoodie, black leggings, black and white Nikes and black sunglasses. The only difference really between her and my son was his hair was slightly longer.

“The lines are really starting to get blurred now between menswear and womenswear. There’s been a real feminisation of …” I started, before being cut off.

“Gender is for the most part a societal construct,” interjected my son (he’s at uni).

“There is no reason to have a men’s section and a women’s section anyway. Look at trainers for example. My friends and I all wear pink, orange fluoro, floral, whatever. The stores don’t even bother to separate them anymore.”

This has become more than apparent at the ready-to-wear shows, which have traditionally staged separate women’s and men’s collections at different times of the year.

Over time, menswear started to make a small appearance in the women’s show, at houses like Burberry, while women’s would pop up at the men’s, in the case of Prada.

Top fashion houses have always pushed the envelope with new alternatives for men, including skirts, but in the past, most men have been largely reluctant to break very new ground, tending to stick to the traditional, or adopting a change in silhouette (such as the leaner, more narrow suiting shapes that are currently popular).

Most of the crazier looks were mainly for the catwalk, with the more conservative alternatives waiting for the customer in store.

But when Gucci’s genius creative director Alessandro Michele began to send out the most beautiful, feminine (if I may use my tired societal construct for one moment) romantic menswear on male models, you could see it was a game-changer on many levels — the show system itself for a start.

Why were there two gender based shows anyway? Why not send out everything in one show, on a mixture of male, female and transgender models, and just present gorgeous, whimsical fashion.

Isn’t it much more modern to let people choose what they like, be it a floral kimono, pussy bow silk shirt, loafers or a velvet suit, without assigning a gender bias? Yes, the fits may be different but the attitude is the same.

The very cool Vetements label is also championing a similar philosophy, recently showing a right-on-the-money collection of high fashion infused with street wear, featuring oversized hoodies, shirts, jeans and outerwear that make no assumptions about the gender of the wearer.

Brioni, the storied Italian label synonymous with classic (and conservative) menswear now has a hip new creative director, Australian Justin O’Shea, who recently sent out a long-length chinchilla coat on the male model, a dove grey suit and tie on the female.

Women have always had, unfairly in fact, a far greater choice of fashion options.

I am far happier in a tailored suit and loafers that I would be in a puff ball tulle gown. I would often look up and realise I was browsing in the men’s section of a store, because for some crazy reason I didn’t want a neon pink stretch tube dress.

So it fills me with joy that Michele sent men down the Gucci runway in rose printed satin suits and lace tights.

Peter Dutton touted as next Liberal leader as he claimed victory in Dickson
‘The urgency of the situation’: WHO steps in as monkeypox cases erupt around the world
Volodymyr Zelensky: How war will end as Ukraine ‘breaks backbone’ of Russian army
Jim Chalmers decries Coalition waste as Labor hits the hustings amid downpours in Queensland
Anthony Albanese, Scott Morrison cast their votes in Sydney
Australian aces at French Open out to show there’s life after Ash Barty
Miss Teen USA makes a big wardrobe change
Today's Stories