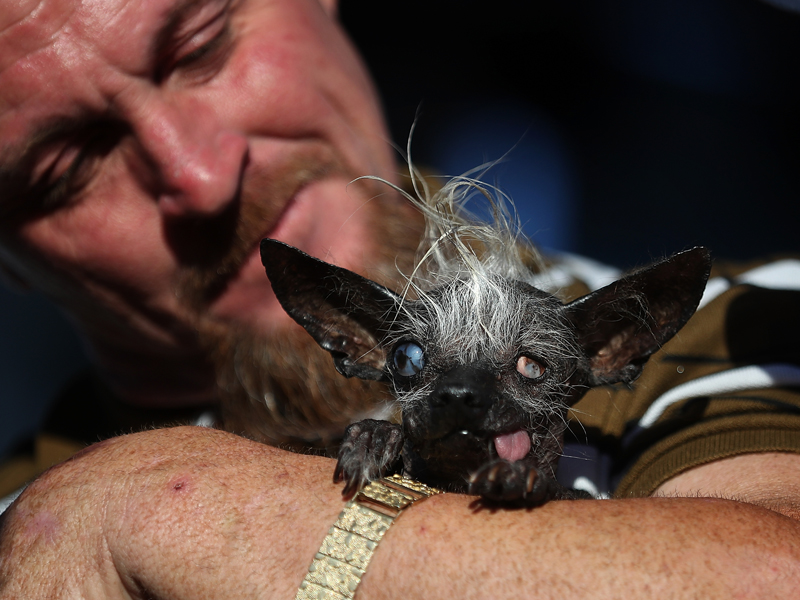 Jason Wurtz, SweePee’s owner, took home on Saturday the $US1500 ($A2000) prize and a trophy from the bizarre annual competition that is part of the Sonoma Marin Fair in California.

• ‘Shame on all of you’: Brexit shock sinks in
• Brexit revenge: what Germany wants from the break-up
• Brexit vote sparks new push for freedom

Three judges used personality, appearance and the audiences’ reaction to decide the winning dog from dozens of entries.

SweePee, with her glassy eyes, wrinkled skin and small tuft of hair, faced competition from entries such as Zsa-Zsa, an English bulldog with a jutting jaw, protruding teeth and a floppy tongue that hung out of his mouth.

Sweepee’s owner was swarmed by reporters — some from as far away as France and Germany — after the announcement.

In his contest entry, he had expressed appreciation for Sweepee’s “baby-soft freckled skin and legendary blond Mohawk”.

Sweepee, described as a “ride or die chick”, likes riding with her owner on his Honda motorcycle, the entry said.

The winner last year was Quasi Modo, who had a birth defect known as short spine syndrome.

The 16 dogs in this year’s contest had names including Icky, Rue, Roast Beef and Rascal Deux. More than half the entries had bad hair.

This was the 28th year of the competition.